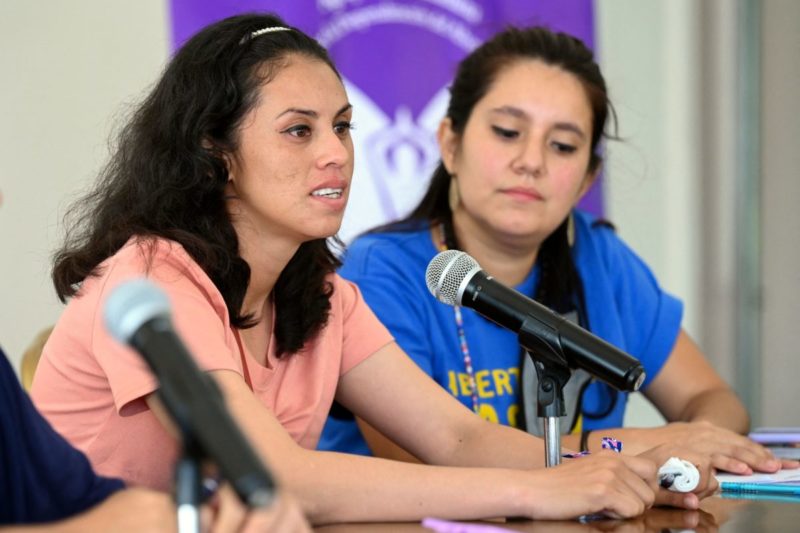 A Salvadoran woman who was imprisoned after an obstetric emergency that caused the loss of her pregnancy was granted parole last week by the sentencing court of Cojutepeque in El Salvador. After spending nine years wrongfully detained, Sara Rogel returned home and now begins the long process of rebuilding her life.

Sara’s story is important in its own right. But it’s also critical in demonstrating to U.S. politicians and the Supreme Court what banning abortion causes: Every person with a pregnancy loss will be under suspicion, police will be invited to intervene in intimate reproductive health-care outcomes, and innocent people will end up in jail. We can and must heed the lessons from Sara’s story and reject attempts to ban abortion.

We met Sara not long ago in El Salvador with a delegation of U.S. state lawmakers to try to better understand how banning abortion devastates families and communities. A recent announcement by the U.S. Supreme Court that it will be considering a case out of Mississippi should strike fear into our hearts, as the Court’s ruling could alter the nearly 50-year foundation of legal abortion in the United States.

Despite the fact that not a single state’s population supports banning abortion, we’re in the midst of an avalanche of state-level abortion bans and restrictions—more than 500 introduced this year alone—which has made much of the promise of Roe v. Wade nearly hollow for many people seeking abortion care. And yet the outcome of Dobbs v. Jackson Women’s Health Organization could push legal abortion even more out of reach.

This spring’s chaotic flurry of bans and restrictions on abortion portends danger.

In Texas, a new law will prohibit abortion as early as six weeks if it takes effect—banning abortion even before some people know they are pregnant—and opens the door for almost any private citizen to sue abortion providers or anyone else involved in the procedure. Arkansas, Arizona, Idaho, Montana, Oklahoma? Abortion ban after abortion ban. These state lawmakers claim to care about women and children, but we only need to look around us, in the United States and beyond, to see that the criminalization of our reproductive decisions has devastating consequences.

El Salvador has one of the most extreme abortion bans in the world. Women are forced to ask courts for permission to receive medical care, oftentimes when on the brink of death. This is what happened to Beatriz, whose pregnancy was diagnosed with a fatal fetal anomaly. Her case received international attention after the Salvadoran court refused to allow doctors to end the pregnancy, even though Beatriz faced grave fatal health risks. The Inter-American Commission of Human Rights eventually intervened to allow Beatriz the care she needed. In the case of 22-year-old Keyla Cáceres, doctors diagnosed her with an ectopic pregnancy but refused to perform an abortion. They waited until her ovaries exploded and her life was on the line before finally taking action.

These stories are far from unique. Countless women and girls in El Salvador are regularly prosecuted and wrongfully imprisoned as a result of its abortion laws, even in cases where they involuntarily suffered miscarriages, stillbirths, or other obstetric emergencies beyond their control. Over the course of 20 years, El Salvador’s total abortion ban has imprisoned more than 55 women and orphaned countless children. Because when abortion is banned, all pregnant people become suspects.

We can’t allow the United States to regress; we can see the horrific impact of banning abortion in the eyes of Sara, Keyla, Beatriz, and the countless other women and families who have been devastated by cruel abortion bans.

There is global momentum to respect the dignity and reproductive well-being of all women and pregnant-capable people. At the end of 2020, Argentina passed a historic bill legalizing abortion—a testament to public support from the medical community and the thousands of activists who for years marched in the streets to demand an end to clandestine abortions. Ireland decriminalized abortion. And while a near-total abortion ban in Poland has been enacted as part of the country’s dangerous slide into authoritarianism, protesters there took to the streets in record-breaking numbers and will continue to fight. Here in the United States, Illinois and New York have enacted protections for abortion rights. Across the Americas and the world, we are unapologetically claiming reproductive autonomy and dignity.

We must heed the crystal-clear lessons of El Salvador: Banning abortion leads only to despair. People, no matter their home country or socioeconomic status, should not die from pregnancy complications. And no one should be jailed for suffering a miscarriage or locked behind bars for having an abortion.

We’re working for a world in which all people can imagine and embody safe and healthy pregnancies if they want them, access to quality health care provided with dignity and respect, and supportive communities that help us all reach our full potential. This is our shared struggle for reproductive freedom, and it’s a struggle worth fighting for around the world and here at home.