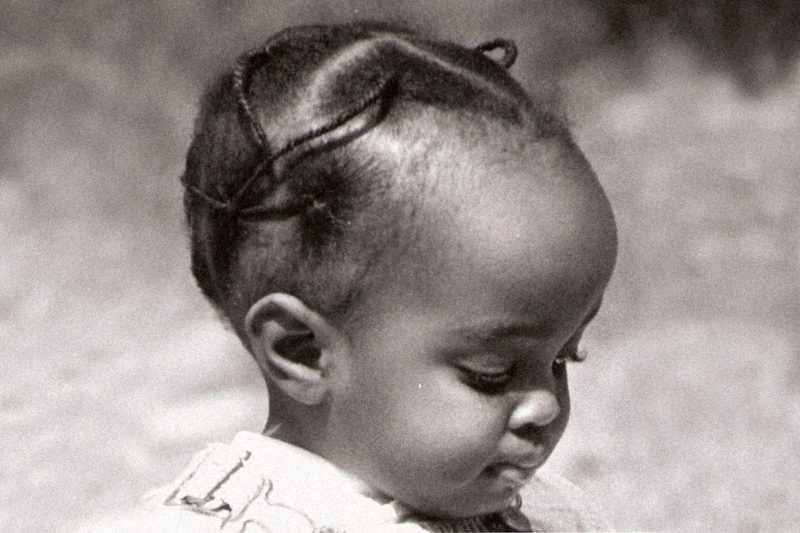 The most dangerous place for a Black child is in this country that views Black lives as expendable and refuses to examine the racist policies contributing to the reproductive oppression that Black women face. Judy Gandy/Rewire News Group illustration

This is a true story.

I was adopted when I was three months old. I always knew that I was adopted—my parents never hid that fact from me. But they didn’t have a lot of information about who my birth parents are. I didn’t know where I came from. I knew I was born in Mountain View, California. Or was I born in San Diego, but then we moved to Mountain View when I was one year old? I’m not too sure, actually. The circumstances of my birth are hazy.

Needless to say, I had an identity crisis in my angsty preteen years. My family had just moved from a predominantly Black neighborhood in Washington, D.C., to a predominantly white neighborhood in suburban Maryland; I was feeling a little lost and I found myself wondering where I had come from. Why did my biological mom give me up? I wanted to know my origin story. But because I had no way of finding out, I made one up for myself.

Origin stories are supposed to be fun. Think of the origin stories of your favorite superheroes. Peter Parker getting bit by a radioactive spider. Superman being launched from Krypton immediately before his planet is destroyed. Wonder Woman leaving Themyscira to save humanity from itself.

My origin story wasn’t quite so glamorous. You see, I had convinced myself that I was a crack baby.

It was the late 1980s and the news was saturated with alarmist stories about crack babies, who the Washington Post called “a bio-underclass; a generation of physically damaged cocaine babies whose biological inferiority is stamped at birth.”

“This is not stuff that Head Start can fix,” explains Douglas Besharov, the former director of the National Center on Child Abuse, who first coined the term bio-underclass. “This is permanent brain damage. Whether it is 5 percent or 15 percent of the black community, it is there. And for those children it is irrevocable.”

1989 was the year I started high school. That’s a difficult time for any teenager, but for someone who was adopted and undergoing an identity crisis, it was particularly difficult. I had been diagnosed with ADHD when I was 9 years old, and “problem child” is a kind way to describe my behavior. I couldn’t understand why I was the way I was, and I was desperate to figure it out. And so I landed on crack baby. It was all over the news, so I figured it had to apply to me.

“Disaster In Making: Crack Babies Start to Grow Up.” I was definitely a disaster, so I had to be a crack baby.

Here’s another headline: “Crack Babies Born to Life of Suffering.” I was totally suffering. So, clearly, I was a crack baby.

“Studies: Future Bleak for Crack Babies.” Yep. I’m fairly certain all preteens at one point or another feel like their future is bleak. I sure did.

I read these headlines, and I thought they were talking about me. That’s how saturated the media was with the talk of crack babies. And there were so few positive images of Black motherhood on TV, aside from power lawyer and Black mom Clair Huxtable from The Cosby Show. And I figured if I was born to a Clair Huxtable-type, I wouldn’t have been put up for adoption in the first place.

In 2007, I got a phone call from my doctor. “We found a small mass in your brain”—never something you want to hear a doctor say. I decided it was a good idea to ask my mom to find out some information about my biological parents.

I wasn’t a “crack baby” after all. My biological mom was upper-middle class, got knocked up by her boyfriend in high school, and decided she wasn’t ready to be a mom. She wanted to go to college and then to law school to become a lawyer like her father. I don’t know if she ever made those dreams come true for herself. But my biological mom may be a power lawyer and may be a power mom, just like Clair Huxtable.

Far from being a crack baby, I had come from a mother that anti-choicers would probably hold up as a “hero.” My biological mom was a middle-class Black teenage girl who made a choice to put her kid up for adoption rather than get an abortion. (Of course, anti-choicers always hold up such young women as heroes even as they ignore the fact adoption was a choice they made, not a fate they were consigned to.)

I wanted to do what I could to make sure that no other child would have to grow up believing the absolute worst about her community or her upbringing simply because there were no narratives available to counteract the noxious ones.

And, certainly, these anti-choicers who laud Black women who choose adoption over abortion ignore that there aren’t a lot of couples in the market for Black babies. Black babies tend to grow up in the foster care system, and that is a difficult life. In fact, my mother recently told me that they had a choice between me and a mixed-race light-skinned baby, and they chose me specifically because they knew it was unlikely I would be adopted by anyone else.

I look back now and the story is rather amusing, but it is also profoundly sad. It’s sad that I—a privileged young Black kid who, by all standards, had everything going for me—would internalize the racism underlying the crack baby craze to such an extent that I would assume I was an unwanted crack baby, rather than “a desirable.“ That I would assume I came from the stereotypical Black mother who is breeding and tossing unwanted babies by the wayside and leaving them for good upstanding taxpayers to take care of. That I believed those stereotypes about Black women and mothers in the first place.

But these are the stereotypes that pervade Black women. Black mothers in particular are routinely blamed for this country’s ills.

It is these stereotypes that anti-choice advocates and lawmakers exploit as they blame Black women for the high rate of abortion in the Black community, while simultaneously complaining about social programs that will help Black women raise the children that the state insists they bear.

Loretta Ross, one of the foremothers of reproductive justice, once said, “Storytelling is a reclamation project of reclaiming your voice, yourself, your truth, helping you to discharge all of the negative things you’ve internalized about those things, so that you can use your fullest and best thinking to figure out what you want to do with the rest of your life.”

For me, the negative things that I internalized were thrust upon me by external forces. By sociologists and scientists who were quick to demonize Black mothers and Black women and who propagated a narrative about Black women addicted to drugs that turned out to be entirely false. It was just too easy to blame Black women for a fake crack baby panic than to figure out the actual reasons for poor birth outcomes for Black women.

Black women are blamed for so much, even as this country tells us that we are not worth helping. We are blamed for the economic destruction of a country that we built with our wombs. We are called lazy and unfit. We live in crushing levels of poverty. We live in communities plagued by environmental toxins. The maternal mortality rate for Black women is more than double (and sometimes five times as high as) that of white women with the same level of education. Indeed, white women without a high school degree have better pregnancy outcomes than Black women with college degrees. We are imprisoned at rates that far exceed our white counterparts. We are disenfranchised—stripped of our right to vote through onerous voter ID laws in a country that managed to convince itself for a while it was post-racial because we had a Black president for eight years, but quickly backslid into outright white supremacy with the election of Donald Trump.

We are called welfare queens and moochers, even though we don’t make up the largest recipients of welfare. We are told that the welfare system, which wasn’t even built for us—it was built for white women and excluded Black women until decades later—is really a system of handouts for Black women.

These stereotypes lead to Black children being fed from schools into prison systems because they are seen as unruly and unworthy of fair treatment. Certainly, teachers throughout my schooling saw me as unruly—and to be fair, I was, but no more unruly than any white kid who was given multiple chances and the benefit of the doubt while I was hauled off to the principal’s office. Stereotypes preclude giving Black kids like me the benefit of the doubt.

These stereotypes also precluded me from creating an origin story for myself that was positive, because I had internalized those stereotypes without even knowing I had done so.

The more I thought about this absolutely offensive origin story I had created for myself, the angrier I got. At myself, for being so pliable, and at the media, government, and scientists for propagating the lies.

So I decided to do something about it.

I decided that I wanted to do what I could to make sure that no other child would have to grow up believing the absolute worst about her community or her upbringing simply because there were no narratives available to counteract the noxious ones. Through my writing and speaking out, I would do what I could to push back on these stereotypes that burden Black women and denigrate us as less than and as other.

Through the stories that I read of enslaved women sometimes making the ultimate sacrifice to save their children from becoming the property of white supremacists, to the abortion stories that I read from Black women brave enough to withstand the harassment they always face when they stand up and say, “I had an abortion and here’s why,” I gained a perspective on Black women’s agency and Black motherhood that was positive. Revolutionary. Empowering.

And I vowed to never again let the stereotypes that plague Black women define me.