What Else Happened? A Bold North Carolina Campaign to End Shackling of Pregnant People

Regina and Kat discuss what the Trump administration is–and isn’t–doing to address domestic violence, how rural communities are disproportionately affected by toxic drinking water, and about the Catholic health systems looking to get into the drug business. Also, Kat talks with SisterSong's Omisade Burney-Scott about a campaign to end the practice of shackling pregnant people in North Carolina prisons. 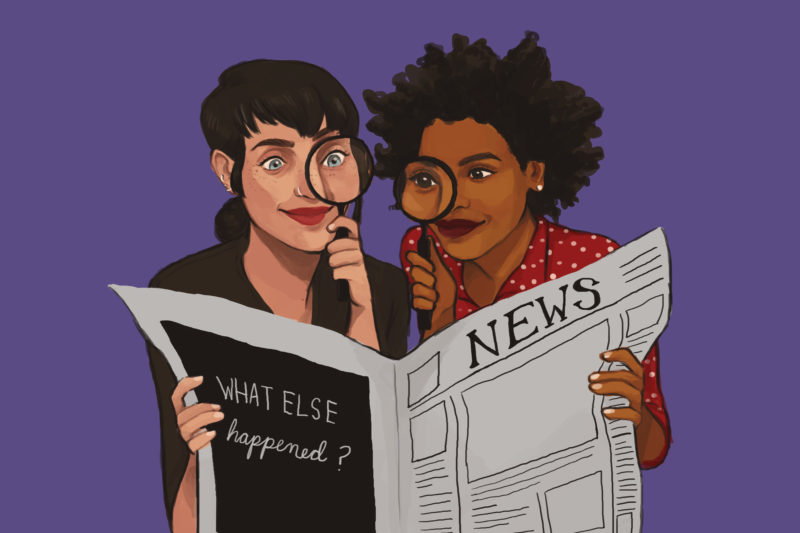 What Else Happened? A Look Inside the Abortion Underground

Kat and Regina discuss the comeback of a disease, raids on strip clubs in New Orleans, and a lawsuit against policy preventing transgender residents from having a driver’s license that reflects their gender identity. Also, Regina talks with Nina Liss-Schultz about her recent piece at Mother Jones on an underground network of activists helping people to terminate their pregnancies. What Else Happened? Congress Tries to Prevent Another Larry Nassar

This week, Kat and Regina discuss a troubling report on AirBnB, the fight against sterilization abuse in Washington state, and new legislation to combat sexual abuse of athletes. Also, Kat chats with writer and activist Raquel Willis about a supermarket chain’s refusal to provide insurance coverage for a life-saving drug.

What Else Happened? Intentional, Deadly Negligence in Orlando

Regina and Kat discuss the pollution crisis in one of the poorest neighborhoods in Orlando, Florida; a fight over installing elevators in New York subways; and how a Portland-based clothing company is taking abortion funding into its own hands. Also, Regina chats with Rewire editor Ali Stine about how snow days can cause major problems for Appalachian parents.

What Else Happened? Chicago Prioritized Religion Over Health Care

Kat and Regina discuss the disproportionately high rates of maternal mortality among women of color in Texas, the Trump administration's latest moves against trans students, and how Chicago is putting religious restrictions above patient access to care. Plus, Kat talks to Sonia Chopra about a Black student in Mason, Ohio, facing racist comments from his white social studies teacher—and what his mother is doing about it. What Else Happened? Job Market Discrimination and Tiny House Activism

Regina and Kat discuss the news about indigenous activists building tiny houses to stop another pipeline, the discrimination women can face on the job market, and the obstacles Black Boston residents must overcome when accessing health care. Plus, Kat talks to Kathy Bougher about an injustice in El Salvador. What Else Happened? Charter School Segregation and Clinic Defenders on High Alert

Kat and Regina discuss the news that charter schools are more racially segregated than other public schools, Wisconsin is in the running for being the first state to drug test food stamp applicants, and Illinois has launched a new program to combat the opioid crisis. Also, Regina chats with Jasmine Sherman, a clinic defender with Pro-Choice Charlotte, about why she believes Charlotte has become an epicenter for abortion clinic harassment. What Else Happened? Injustices in Social Security and Missing Coverage of Anti-Asian Hate Crimes

Kat Jercich and Regina Mahone are back to discuss how Social Security is leaving behind people with disabilities, a spike in hate-based violence against Asian people in the United States, and new solutions to the domestic violence epidemic. What Else Happened? Prison Injustice, a Rural Water Crisis, and Philando Castile’s Legacy What Else Happened? Congress Failed, Parents With Disabilities Sued, and a ‘Concentration Camp’ Closed What Else Happened? A North Carolina Mother Learns Whether She Can Leave Sanctuary

Rewire managing editor Regina Mahone talks with immigration reporter Tina Vasquez about a breaking development for Minerva Garcia, a North Carolina woman who had been forced to take sanctuary in a local church to fight her ICE deportation order. Where is Minerva now, and what lies ahead for her and her family? What Else Happened? Hunger, Pregnancy Discrimination, and Progress in Birmingham

Rewire managing editors Regina Mahone and Kat Jercich discuss the hungriest states in the country; a surprising new ordinance in Birmingham, Alabama; and misspent state funds in Texas. Plus, Kat interviews the ACLU's Gillian Thomas and Regina finds her joy at a birthday party. What Else Happened? Buried Stats, Forgotten Kids, and Court Shenanigans