Elizabeth Nash is the Senior State Issues Manager in the Guttmacher Institute’s Washington, DC office. She coordinates the efforts of the state team, which analyzes legislative, regulatory and judicial actions on reproductive health issues and develops Guttmacher’s monthly State Laws and Policies series and update of state policy developments. Ms. Nash joined the Institute in 1999. She received her undergraduate degree from the College of William and Mary in 1996 and earned a master’s degree in public policy from The George Washington University in 2005.

2016 Brought a Flood of Abortion Restrictions, But Also a Surge of Proactive Measures

While state legislators pushed through 20-week abortion bans and restrictions against fetal-tissue research in some states, there was progress on measures related to contraceptive access in places such as California, Illinois, and Vermont. State-Level Attacks on Sexual and Reproductive Health and Rights Continue, But There’s Also Some Good News

Despite the ongoing attention to restricting abortion, legislators in several states are looking to expand access to sexual and reproductive health services and education. The year will be remembered not only because 17 states enacted a total of 57 new abortion restrictions, but also because the politics of abortion ensnared family planning programs, providers, and life-saving fetal tissue research. States Enact 51 Abortion Restrictions in First Half of 2015: Mid-Year Analysis

Through the first six months of 2015, states enacted 51 new abortion restrictions; this brings the number of restrictions enacted since 2010 to 282. States Continue to Enact Abortion Restrictions in First Half of 2014, But at a Lower Level Than in the Previous Three Years

So far this year, 13 states have adopted 21 new restrictions designed to limit access to abortion, about half the number (41) of similar restrictions that had been enacted by this point last year. In 2013, 39 states enacted 141 provisions related to reproductive health and rights. Half of these new provisions, 70 in 22 states, sought to restrict access to abortion services. 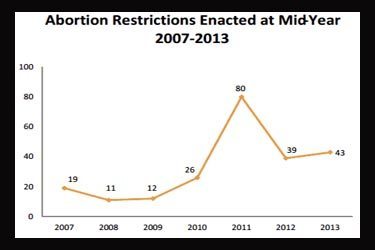 In the first six months of 2013, states enacted more than 100 provisions related to reproductive health and rights, including 43 restrictions on access to abortion—the second-highest number of abortion access restrictions ever at the midyear mark, and as many as were enacted in all of 2012. 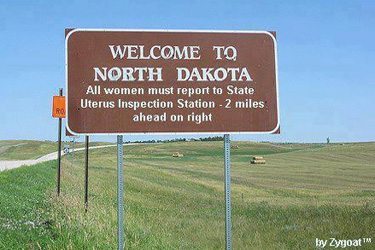 Unlike in recent years, when the thrust of legislative activity was on regulating abortion, this year legislators seem to be focusing on banning abortion outright.