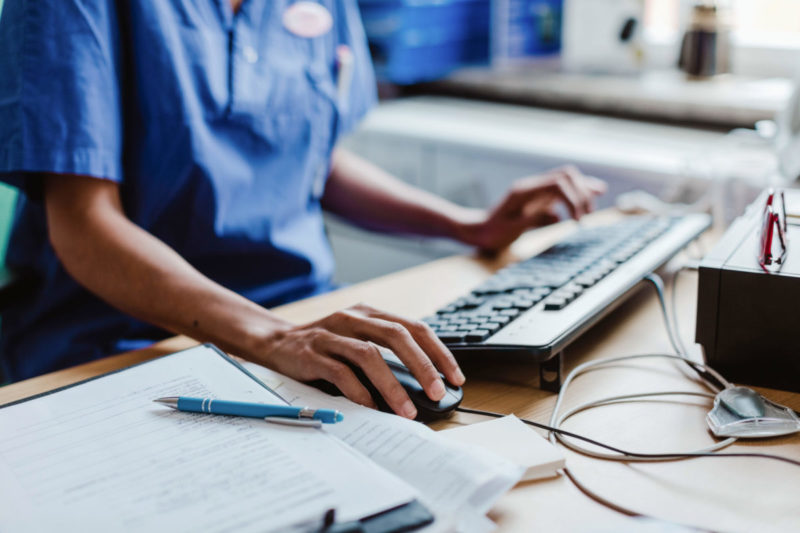 Our clinic is one of only nine in the seventh-most-populous state, and one of even fewer providing abortion up to the state’s legal limit. Getty Images

Abortion clinic workers are exhausted. We’re facing more than two years of COVID-19, understaffing and underresourcing of clinics, and the enormity of the disaster about to crash into our livelihoods.

“I am angry, sad, disappointed, afraid, depressed, anxious all the time,” said Heather, a registered nurse who both provides abortion care and works in labor and delivery.

The abortion-care crisis on the horizon is almost unimaginable, and there appears to be no end in sight. The ripple effect of Texas SB 8 has already impacted clinics hundreds of miles away from the state border and inspired copycat bills in other states. And if the Supreme Court overturns Roe v. Wade, which appears to be inevitable, 26 states are certain or likely to ban abortion.

Like Heather, I work at a clinic in Ohio, where new restrictions on abortion arrive with every legislative session. Our clinic is one of only nine in the seventh-most-populous state, and one of even fewer providing abortion up to the state’s legal limit. Our city is a blue dot, but it’s also one of the poorest and most segregated in the nation.

Abortion workers are endlessly tenacious and creative. Our clinic was founded by a grassroots group of people who, upon realizing no one else was opening a clinic after Roe made abortion legal, did it themselves. The work can be uniquely fulfilling; it’s joyful, humbling, liberating. We’re a scrappy Rust Belt underdog, enduring despite the challenges.

Allegra, a patient advocate and a sonographer with 25 years of experience, recalls, “We were always fighting to give abortion access to women no matter where they were.” Now, she says, “I can’t imagine a world where my granddaughters can’t decide when or if to start a family.”

In December, after the Supreme Court heard oral arguments in Dobbs v. Jackson Women’s Health Organization, we started hearing fatalistic messages. Leadership told workers the state would “go dark” and the already-struggling clinic would close. Staff were burned out and scared; many left and couldn’t or wouldn’t be replaced. The wait time for an appointment went from a few days to a few weeks. We had no relief coming, even though we were still here, still providing legal abortions.

“It feels surreal,” another coworker, whom I’m calling Taylor, said. “It hurts sometimes, living in this state and knowing that they really don’t care about us, the people who live here.”

We’re on a sinking ship, we joke, about to go over a waterfall, and the ship is also on fire and there aren’t many lifeboats. Heather says, “It feels like the movie Jaws, where I’m warning people but no one wants to believe me until it actually happens.” I think the urge toward metaphor reflects how difficult it is to characterize our experiences. We’re staring catastrophe in the face and can’t step away.

We worry that the general population isn’t prepared for just how bad the official end of Roe will be, that there will be insufficient infrastructure to support the most vulnerable.

Of course, many parts of the country are effectively already in a post-Roe world. TRAP laws have created unnecessary financial strain. Many clinics have struggled to adapt to telemedicine (or haven’t been able to, due to state laws). There’s also a loss of funding from foundations that are shifting their priorities or simply withdrawing support from states that will soon see extreme bans. This loss of funding has already diminished clinics’ ability to see patients while they still can. In trying to prepare for the fall of Roe, these now-absent funders may have ushered in its very disturbing preview.

As clinic workers, we have the most direct contact with people seeking abortion. We worry that the general population isn’t prepared for just how bad the official end of Roe will be, that there will be insufficient infrastructure to support the most vulnerable.

“I don’t understand why we aren’t screaming this out, that your rights are being threatened,” Allegra said. As Taylor added, “It’s been a threat the whole time. … So even though this might actually be ‘the Big One,’ it also feels like it’s not real until it happens.” We can all think of patients who simply won’t be able to access care if it becomes illegal in their home states. We meet them every day.

While our concerns center on people who will need abortions—and many clinic workers have themselves been abortion patients—we’re also thinking of our livelihoods. For Allegra, this is her “life’s work.” A trans worker, remarking on the similar perils facing trans rights, worries about fitting in or even having to hide his identity at a less-affirming workplace.

Heather notes that talented health-care professionals could leave hostile regions. “It’s affected my relationship with my family because they all voted for Trump. … I went to nursing school so I could be an abortion nurse. I will continue to provide abortion care, even if I have to move to another state.”

All clinic workers accept some risk of anti-abortion violence. I am willing to die for this cause, but must I self-sacrifice? Many of my coworkers have contracted COVID-19. Some with chronic illnesses have endless flare-ups due to the stress. Normally, this would be cause to talk about how we can’t pour from an empty cup. We’re profoundly weary. We know having a job that feels like a calling doesn’t justify these working conditions. At the same time, it’s now or never. If we are going to preserve access until the very end, we must commit fully. It’s not supposed to be sustainable—it has to be heroic.

This is a eulogy I don’t want to write. It’s a warning for what is to come. And it’s a love letter to the people who make abortion care possible. To those in the movement, it’s time to listen to the people on the ground. Trust Black women. Support the workers (and their unions). Listen to the people still working to preserve access in places that have been written off by those who claimed to defend us.

Clinic workers are tired and terrified, but we’re still showing up.