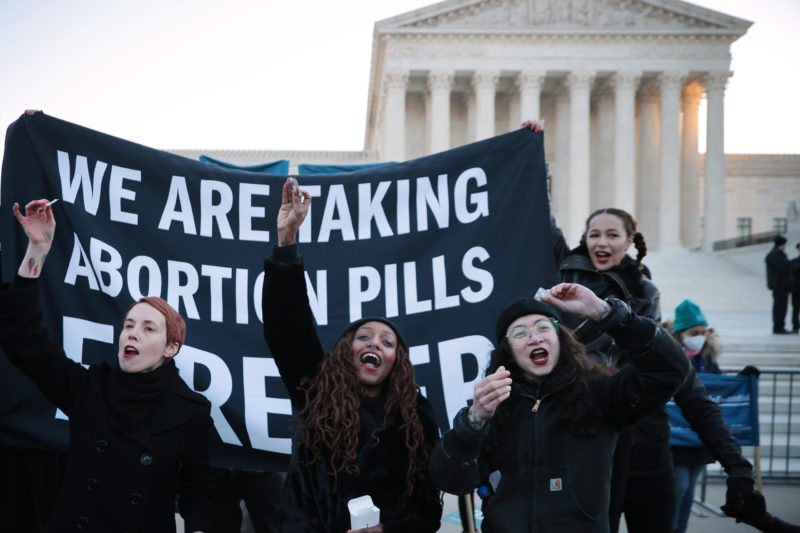 Self-managed medication abortion is helping to fill the gap in access caused by SB 8 as part of a range of options, including accessing care out of state. Chip Somodevilla/Getty Images

For more coverage of Texas SB 8, check out our special report.

As abortion restrictions continue to tighten around providers and patients across the country, the availability of abortion pills by mail has never been more critical.

A separate study, published today in the Journal of the American Medical Association, found that demand for self-managed abortion through Aid Access, a nonprofit organization that provides abortion pills by mail, has increased substantially in Texas since SB 8 went into effect in September. Texas SB 8 bans nearly all abortions in the state after embryonic cardiac activity can be detected, typically at six weeks’ gestation. The impact of this devastating law is reverberating not only in Texas but also in neighboring states, where studies are showing an increase in patients traveling from Texas.

Rewire News Group spoke with Dr. Abigail R.A. Aiken, an associate professor at the University of Texas at Austin’s LBJ School of Public Affairs and one of the authors of the study published in JAMA, about how the landscape of abortion access in Texas with regard to self-managed abortion provides a glimpse into what the country could look like post-Roe v. Wade, and the importance of understanding both the medical safety and legal risks of abortion pills. The interview has been lightly edited for length and clarity.

Rewire News Group: Can you tell us about the landscape in Texas that laid the foundation for this study?

Dr. Abigail R.A. Aiken: SB 8 is an unprecedented and unconstitutional piece of legislation that represents the earliest gestational limit on abortion anywhere in the U.S. right now. In light of the restrictions this puts on people’s ability to access abortion care in Texas clinics, we asked the question of whether interest in and need for self-managed medication abortion (i.e., abortion done with pills outside of the formal health-care setting) would increase.

Why was it important to focus on medication and self-managed abortion in the context of SB 8?

AA: While there are other types of self-managed abortion—for example, the use of herbs and botanicals, or menstrual extraction—we focused on medication self-management because it is now likely to be one of the most common methods. The international nonprofit and online telemedicine service Aid Access has been operating since 2018 and has brought access to self-managed medication abortion to all 50 U.S. states.

Given how widespread and accessible Aid Access is in terms of both online access and cost, we partnered with the organization to analyze fully de-identified data on requests from the year before SB 8 went into effect to establish a baseline average of daily requests, and then analyze data on requests from the weeks and months after SB 8 went into effect to see how the average daily request rate changed. While we cannot count every self-managed abortion that may happen in Texas, we used an accessible and reliable source of data that is also very likely to reflect one of the most commonly used methods of self-management today.

What does the drastic increase in demand for self-managed abortion mean for access in Texas?

AA: We found demand for self-managed medication abortion increased in Texas very sharply in the week after SB 8 took effect, from an average of 10.8 to 137.7 requests per day. In the following three months (up until the end of December 2021), requests fell from this sharp peak but remained about triple the baseline rate (10.8 vs. 29.5 requests per day).

These findings suggest that self-managed medication abortion is helping to fill the gap in access caused by SB 8 as part of a range of options, including accessing care out of state. For some, it may be a backup to accessing care in the clinic setting, while for others it may be a preferred option they were previously unaware of.

Laws similar to or as restrictive as SB 8 are cropping up around the country, and with the decision in Dobbs v. Jackson Women’s Health Organization looming, abortion access will continue to dwindle. What does this study teach us about the importance of self-managed abortion moving forward in this increasingly hostile environment?

AA: The increases in demand for self-managed medication abortion we found in this study likely provide a window on what we will see in other states where abortion is outlawed or severely restricted should Roe be overturned. Not everyone will be able to or will want to travel out of state to access care, and we know from the experience of other countries where abortion is banned or inaccessible that self-managed abortion is an important way of securing access and preserving reproductive autonomy.

Can you discuss the safety and efficacy of self-managed abortion, and what do you think folks need to know before seeking it out?

AA: In a recently published study examining the safety, effectiveness, and acceptability of medication abortion provided through the Aid Access service, we found rates of effectiveness on par with the clinic setting, very low rates of serious adverse events, and high acceptability to users. These results support a body of evidence from other settings showing that self-managed medication abortion is safe and effective, and they provide the first evidence in the U.S. context. It is reassuring to know that people in the U.S. have safe and effective options for self-managing their own care.

The main risks are and will, unfortunately, likely continue to be legal ones. While self-managed abortion is not currently against the law in the vast majority of states, there have been instances of prosecution for alleged self-management, most commonly of people with low incomes and people of color. Several helplines exist to support people in the U.S. who self-manage, including Reprocare and the Repro Legal Helpline.