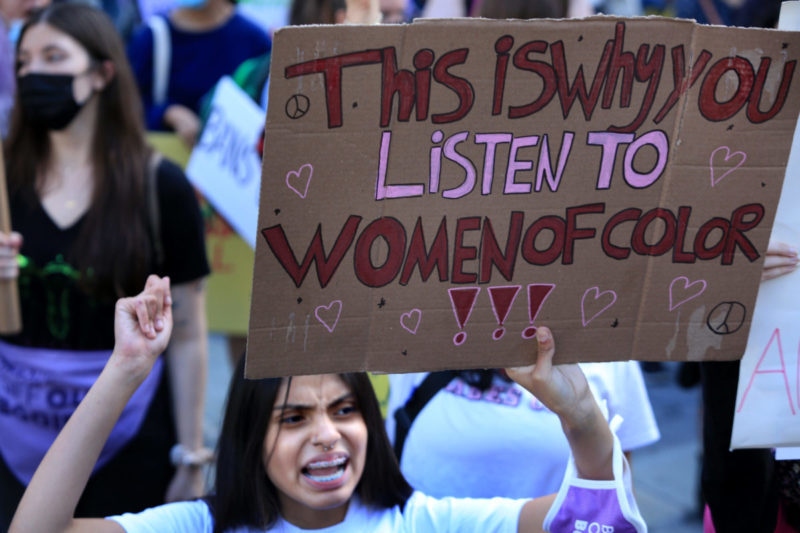 For more coverage on Texas SB 8, check out our special report.

Everyone deserves the full self-determination and bodily autonomy that comprehensive reproductive rights allow. But lately, we don’t live in a country that equally protects a pregnant person’s right to choose.

A wave of limitations and historical setbacks is crashing throughout the nation, beginning with Texas and expanding throughout the South. Nearly 40 percent of the population in Texas is Latinx, meaning these abortion restrictions are effectively targeting a large portion of our community that is already three times less likely to be insured than non-Latinx white people. The Latinx community is suffering at the hands of Republican-led governments, and political leadership needs to change to represent those of us being left out of crucial conversations.

Texas has set the groundwork for statewide limitations on reproductive rights. By enacting SB 8 and signing into law SB 4, Texas has increasingly left Latinx people without options to seek time-sensitive medical care. By outlawing abortions before many people know they’re pregnant, SB 8 is forcing pregnant people to seek medical care in other states and inundating clinics in states like Oklahoma. But for Latinx people, this restriction is proving to be particularly burdensome.

With the Guttmacher Institute reporting the average Texan now has to travel 14 times farther to attain abortion care, immigrant Latinx folks are left with little to no options. The checkpoints set up by Immigration and Customs Enforcement (ICE) prevent undocumented Latinx people from leaving their border towns to receive the life-changing care they seek, and they are instead being forced into self-managing their abortions at home. In the first few months of the COVID-19 pandemic, 37 percent of Latinxs had someone in their household lose their employer-provided insurance, further marginalizing our community’s access to vital health care. Despite already straining a severely strained system, just a few weeks after SB 8 went into effect, Gov. Greg Abbott signed SB 4 into law to restrict use of medication abortion and further impose limitations on what little options Latinx Texans had left.

Self-managed abortion care has been proven to be a safe and effective way for people to navigate the structural inequities of our health-care systems, financial barriers, and immigration obstacles for over 20 years. At less than $2 a pill for misoprostol, medication abortion has long been a standard practice of reproductive health care for Latinx people.

By preventing physicians from providing abortion medications to people over seven weeks pregnant and prohibiting the medications from being mailed in Texas, the law yet again strips Latinx people of their access to time-sensitive health care and forces them to consider long, expensive out-of-state trips as their only legal alternative.

Not even a week passed after SB 8 went into effect before at least seven GOP-controlled states began to show interest in mimicking the draconian Texan abortion restrictions. Florida was the first to officially introduce legislation that is a direct copy of Texas’ abortion ban, and it won’t be the last. We can’t look at this as a singular state’s problem, because Texas’ creative evasion of federal law has inspired states throughout the country to quickly follow suit.

Latinx people know that we have to start gaining positions of power within the government if we ever hope to be considered in conversations that will drastically affect our futures. Today, as the Supreme Court hears oral arguments on SB 8, we understand that real change occurs down the ballot.

In order to ensure that legislation as restrictive as the latest anti-abortion bills doesn’t become the standard of care, we need to invest in the women in our communities to unseat our current regressive leaders and change the political playbook. 2020 saw a record sum of Latinxs running for congressional office, with the largest number of Latinx folks to run for the House or Senate in a single election year. Whether it be longtime leaders or those with a newly sparked interest, it is clear that the future will finally hold space for us.