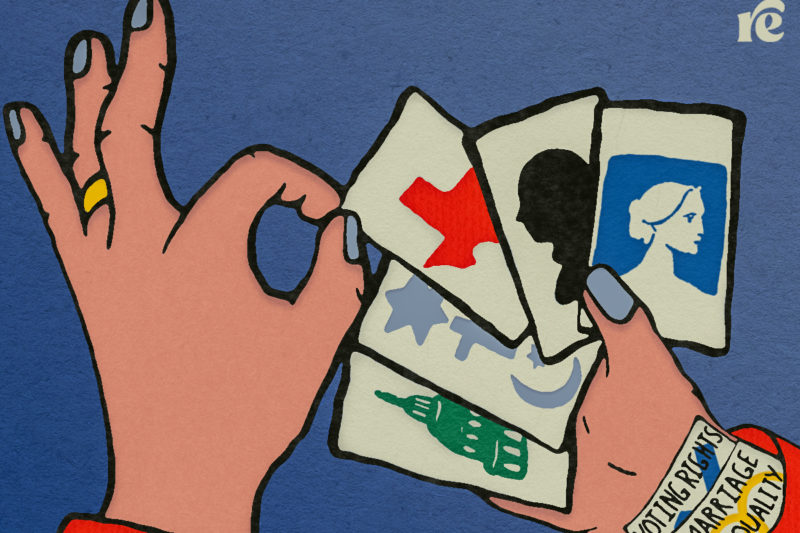 There is a power grab afoot in this country with conservatives and evangelicals using abortion as a kind of Trojan horse to go after all manner of civil rights. David Preli/Rewire News Group illustration

For more on the power grab, check out our special edition.

In a few short months, the Supreme Court will hear oral arguments in Dobbs v. Jackson Women’s Health Organization, the first direct challenge to legal abortion to land before the high court in decades. The case involves a challenge to a Mississippi law that bans abortion at 15 weeks in direct violation of Roe v. Wade. Initially dreamed up by anti-choice activists at the Alliance Defending Freedom before making its way to the Mississippi State House in 2018, the model legislation at issue in Jackson Women’s Health is so patently unconstitutional that not a single federal court has ever let it take effect, even temporarily.

The truth is, there is a power grab afoot in this country with conservatives and evangelicals using abortion as a kind of Trojan horse to go after all manner of civil rights. Their goal is simple yet devastating: maintain political power despite their own increasing demographic irrelevance and political unpopularity. The bad faith in this power grab might be easiest to see from the religious right in Mississippi, which lags behind in nearly every major indicator of “life” and now holds the dubious distinction of leading the country in COVID-related deaths, and where fetal deaths due to COVID-19 have recently doubled among unvaccinated pregnant people in the state.

There is a reason, as my colleague Imani Gandy explains, that the fight to curb voting rights goes hand in hand with the fight to roll back abortion access. And there is a history of anti-Blackness, as Renee Bracey Sherman and Dr. Tracy Weitz detail, that got us to this point where reproductive autonomy is used as a wedge against other rights.

It’s not just the United States, either. According to a recent piece in the New York Times, 31 countries have expanded access to abortion since 2000—a trend that goes along with the rise of democratization abroad. During that same time, only three countries have experienced a dramatic rollback of abortion access: Poland, Nicaragua, and the United States. It is no coincidence that those three countries have engaged in a dramatic rollback of other civic rights as well. Authoritarianism depends on controlling reproductive freedom, in this country and abroad.

That is why 2021 is on record to be the most devastating year yet for abortion rights and access in this country. And for voting rights. And for gay and trans rights.

But let’s focus our attention back on abortion rights. Since the start of the year, almost 600 abortion restrictions have been introduced across 47 states. Those restrictions, like the one the Supreme Court recently let take effect in Texas that bans abortion as early as six weeks and deputizes third parties to enforce it, are more extreme than the law the Supreme Court is set to rule on in Dobbs v. Jackson Women’s Health. Yes, their goal is to restrict, or outright ban, abortion access. But these bills do even more than that—they threaten the very civic fabric of our democracy, as Texas SB 8, the abortion bounty hunters law, makes terrifyingly clear.

To that end, the Court has already broadcast how the Dobbs case will probably turn out. The only question in Jackson Women’s Health is “whether all pre-viability prohibitions on elective abortions are unconstitutional.” By letting Texas SB 8 take effect, the Court has, in no uncertain terms, answered that question with a “yes.” All that remains is the process of showing its work, which I expect the justices will do when they release an opinion in Dobbs upholding Mississippi’s 15-week abortion ban.

When the Dobbs v. Jackson Women’s Health decision is released next summer, there will likely be a loud and resounding chorus of “How did this happen?!” Political pundits will gnash their teeth and question how a “centrist” Roberts Court could ever gut Roe, while the Susan Collinses of the Senate clutch their pearls over the fallout that will land, tragically and predictably, on everyone with the least amount of resources and support to weather the blows.

But know this: Because the fight over abortion access is over so much more than abortion access, the anti-choice movement will not stop with overturning Roe v. Wade. No. There is no universe where “sending abortion back to the states” satisfies these political mercenaries. Their endgame is “fetal personhood” and a complete rollback of sexual privacy rights. Full stop.

We don’t even have to guess about this—they’ve told us explicitly.

Jonathan Mitchell, former clerk to the late and extremely anti-civil rights Justice Antonin Scalia and the architect of Texas SB 8, filed an amicus brief in Dobbs v. Jackson Women’s Health on behalf of Texas Right to Life, the advocacy organization most eager to collect abortion bounties on doctors and patients. In the brief, Mitchell and Texas Right to Life invite the Court’s conservative wing to not just overturn Roe and Casey, but to also go ahead and overturn two foundational LGBTQ cases—Obergefell v. Hodges and Lawrence v. Texas.

Obergefell and Lawrence are to marriage equality what Roe and Casey are for abortion rights. Together, they protect and recognize sexual privacy and the dignity rights of LGBTQ people. They are some of Justice Anthony Kennedy’s most important decisions, and they are all in danger of unraveling.

And while I’ve been extremely (and rightly!) critical of Justice Kennedy’s majority opinion in Obergefell for being a fundamentally conservative decision that did nothing to push back against the repressive heterosexual norms that informed sodomy and same-sex marriage bans, there was something profound in a conservative Supreme Court issuing a decision boldly proclaiming that LGBTQ people not only have equal rights, but that they deserve equal dignity in our society as well.

But 2015 was not that long ago, as far as Supreme Court precedents are concerned. And the conservative justices who remain on the bench, including Chief Justice John Roberts—who was so offended by the outcome of Obergefell that he read his dissent from the bench while his gay sister was in the audience—have made it clear that they view the recognition of the dignity of the LGBTQ community as an affront to their own identities. So we have no reason to believe that marriage equality—let alone LGBTQ sexual privacy rights—are safe with this Supreme Court.

Of course, rolling back abortion rights and marriage equality will be exceptionally unpopular, which is why conservatives are once again making a fresh play at voter suppression. Anti-choice forces in Mississippi tried it in 2011 and voters said no to personhood, though they said yes to voter suppression. But it’s a decade later, and if conservatives ever concerned themselves with such quaint notions as “the will of the people,” they certainly don’t anymore.