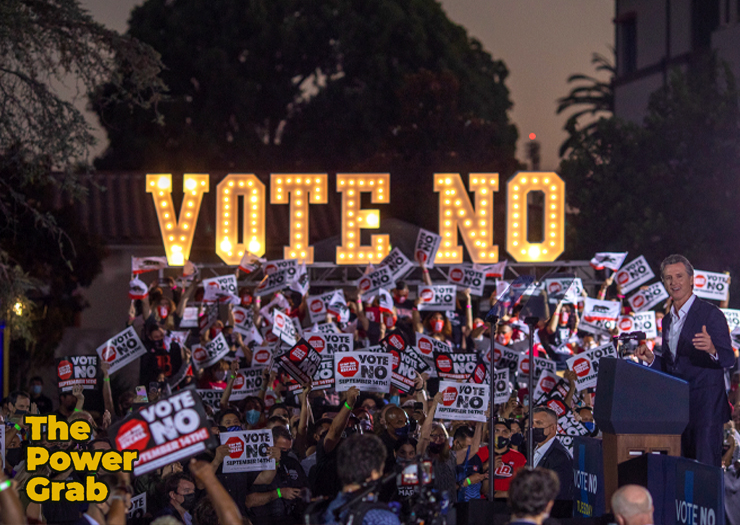 As a consequence of Democrats having the barest of Senate majorities, governors can affect the broader reproductive justice landscape for the entire country. California almost had that scare. David McNew/Getty Images

For more on the power grab for your rights, check out our special edition.

California, New York, and Illinois are the rejoinder to the question “what will people do if Roe v. Wade falls?” But only California has a strange recall process that allows its sitting governors to be replaced by someone who earned a plurality of votes, no matter how small.

These arcane rules are what threatened Gov. Gavin Newsom, the first-term leader and unabashedly pro-choice politician, who is up for reelection next year. By contrast, his highest-polling opponent, conservative radio host Larry Elder, had said Roe was “one of the [Supreme Court’s] worst decisions” and described abortion as murder. (Elder also disparaged minimum wages laws and the Family and Medical Leave Act, the only form of guaranteed parental leave in the United States.)

Though some polls in July and August suggested the recall effort was close, Newsom won easily, by a margin of 2-1 with 70 percent of the votes counted. Abortion access vaulted into the national news in the final weeks of the campaign after the Supreme Court failed to block Texas’ unconstitutional six-week abortion ban. Newsom, who—along with his supporters—had campaigned heavily on reproductive rights, vaulted to a double-digit lead days before the polls closed. Anti-abortion advocates will no doubt move on to the Virginia gubernatorial race in November, where another pro-choice Democrat, Terry McAuliffe, will face off against an anti-choice conservative, Glenn Youngkin. The state could be crucial for people seeking abortions across the South.

California has few restrictions on abortion, lots of clinics, and laws requiring insurance coverage. It’s considered a repro firewall. To have lost some of those protections and that access would have been devastating for people inside and outside the state. This was not a theoretical worry, with the Supreme Court set to hear a case this fall that could overturn Roe and, in the meantime, allowing the Texas ban to take effect.

The recall could have threatened the gains made in California at a perilous time, said Jessica Pinckney, executive director of ACCESS RJ, a reproductive justice organization in Oakland that operates a bilingual healthline and practical support network and advocates for policies to remove the state’s remaining barriers to sexual and reproductive health care.

California has very strong protections for abortion access, said Jennifer Driver, senior director of reproductive rights at the State Innovation Exchange (SiX) and SiX Action, and while the state legislature was not on the ballot, governors have broad powers to make key appointments, set policy, and veto and enforce laws.

Jodi Hicks, president and CEO of Planned Parenthood Affiliates of California (PPAC), said the governor appoints judges and agency heads, and he has line-item veto power in a very large budget. The governor also names the director of the state Medicaid program, said Lisa Matsubara, PPAC’s general counsel and vice president of policy. California is one of 16 states that covers abortion care for Medicaid enrollees, and the Medi-Cal head has broad discretion over the program.

“If there is a Republican governor who has [a] sort of anti-abortion agenda,” Matsubara said, “it would have a disproportionate impact on pregnant people who are low income who rely on Medi-Cal for services.”

Not only can a governor’s veto power be detrimental to proactive legislation, Driver said, the state agencies are tasked with enforcing laws already on the books, including ones that may be antithetical to the governor’s views.

“We’ve seen the barriers that exist for our callers and our communities, and we’re supporting folks through overcoming those barriers to the extent that we can.”
-Jessica Pinckney, executive director of ACCESS RJ

Two reproductive rights bills are awaiting Newsom’s signature, Matsubara said, and that could have been imperiled by a change in leadership. The first enhances protections for abortion providers, clinic staff, and patients by making it a crime to film or photograph them outside clinics with the intent of intimidating them or spreading their information online. The second ensures that insurance plans send information about sensitive services like abortion to the patient and not the main policyholder, who might be a parent or a spouse.

ACCESS RJ supported a law passed and signed in 2019, set to go into effect by January 2023, that requires all public colleges and universities offer medication abortion in student health centers at no additional cost. And the organization is currently supporting SB 245, the Abortion Accessibility Act, which would remove all cost-sharing, like deductibles and co-pays, for abortion services, Pinckney said. While California is one of six states that require insurance coverage of abortion, ACCESS RJ’s callers with private insurance have sometimes had to pay up to $2,000 out of pocket to get an abortion, she said. Those policies also could have been in jeopardy if Newsom lost.

Taken together, actions by a Republican governor could have weakened abortion access in California, which impacts the lives of more people than California residents. Planned Parenthood health centers in California have seen some Texas patients in the wake of the ban, Hicks said, but after next summer’s Supreme Court decision, California would be important to people seeking abortions coming from other states, like neighboring Arizona, or anyone across the country who has friends or family in California they’d want to stay with when getting abortion care.

Driver said people may not see the downstream effects of elections like these. “People aren’t really making the connections broadly of what could actually happen should a Republican governor come into office in California,” she said. “It doesn’t just affect California. This has national implications.”

As a consequence of Democrats having the barest of Senate majorities, governors can affect the broader reproductive justice landscape for the entire country. A Republican governor of California could have altered control of the U.S. Senate if 88-year-old Dianne Feinstein were to retire or become ill, or if tragedy were to befall the state’s junior senator, Alex Padilla. If the Senate gavel goes back to Mitch McConnell, there would be no action on abortion access, Medicaid expansion, paid leave, the minimum wage, voting rights, the climate crisis, gun control, and more. And, of course, there would be more conservative judges.

Every governor’s race with a Democratic incumbent will have the same stakes until Democrats win more Senate seats. This includes the Virginia gubernatorial election on November 2. Virginia repealed many of its abortion restrictions in 2020, including eliminating a mandatory waiting period, forced ultrasounds, and limits on which kinds of medical professionals can provide abortion care. The changes will help Virginia be a lifeline to increasing numbers of people across the South who might have to leave their home states to have an abortion after the Supreme Court rules next summer.

That polls in the California election even looked competitive reminds us that voters in states considered to be blue bastions have a broad range of perspectives, Pinckney said, which isn’t necessarily a bad thing as long as people’s rights aren’t taken away.

“From an abortion fund and a reproductive justice perspective, we’ve seen the barriers that exist for our callers and our communities, and we’re supporting folks through overcoming those barriers to the extent that we can,” she said. “There’s so many challenges, maybe less so than other states, but still enough that we have work to do.”

The once-tight race also highlighted that the United States is not yet done with Trumpism, Driver said.

“There’s still kind of that undercurrent of a swath of society who still has a lot of resentment and is ready to continue to be loud and boisterous about their displeasure of where this country is going,” she said. “This idea that all of the kind of vitriol that we’re seeing was just going to magically go away because Trump was out of office I think is a naive perspective.”