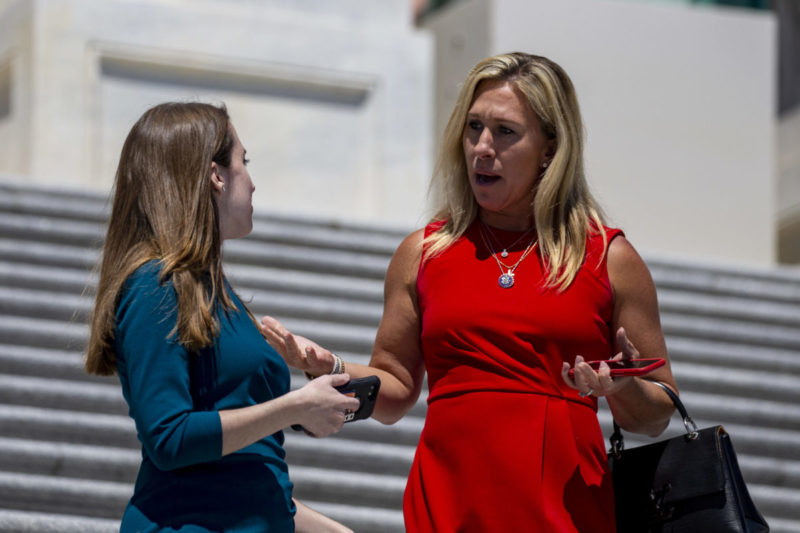 Facts and science haven't been important to the Marjorie Taylor Greenes of the world—and that's probably not changing any time soon. Tasos Katopodis/Getty Images

Reproductive rights advocates in Missouri notched a win last Saturday when they thwarted efforts by Republican lawmakers to redefine certain contraceptives as “abortion-inducing drugs” and ban Medicaid from covering them. Republican state senators falsely claimed that using contraceptives like Plan B or IUDs is the same thing as getting an abortion.

This is categorically untrue, and critics were swift to point out that these forms of hormonal birth control prevent pregnancy, while abortion-inducing drugs like mifepristone, or RU-486 (as it was once called), terminate an existing pregnancy. But this lie has been an anti-choice talking point for a long, long time.

It’s easy to laugh at Marjorie Taylor Greene when she spouts this nonsense, as she did recently on the U.S. House floor, saying, “The Plan B pill kills a baby in the womb once a woman is already pregnant,”

Plan B does no such thing, and this piece from Dr. Jen Gunter provides a detailed explanation as to why Greene and others who parrot that line are spewing false information.

Quite a few anti-abortion advocates, lawmakers, and politicians make claims similar to Greene’s. In their view, a fertilized egg is a person, and if a contraceptive prevents that person from being implanted into the uterus, then that contraceptive caused an abortion. (Ted Cruz and Brett Kavanaugh are just two people who have parroted claims about birth control being an abortion-inducing drug.)

Anti-choicers will point to language from the Food and Drug Administration that suggests emergency contraceptives can prevent implantation of an already fertilized egg; in their view, that’s the same as an abortion. Even if that were the case—and the medical consensus is that it is not, as Gunter points out—this is legacy language from the 1990s and early 2000s, when there was no data demonstrating for certain that Plan B operated by inhibiting ovulation.

As a result, the insert for Plan B says the following:

Plan B One-Step is believed to act as an emergency contraceptive principally by preventing ovulation or fertilization (by altering tubal transport of sperm and/or ova). In addition, it may inhibit implantation (by altering the endometrium).

However, there is no data demonstrating that Plan B inhibits implantation, and by now there is even more research showing that it works by preventing ovulation. Moreover, as Gunter notes, “What is often lost in the discussion is that package inserts and FDA labeling are mostly legal documents, not medical ones.”

They’re CYA documents that the FDA puts out to … well … C their A.

When Marjorie Taylor Greene says birth control causes abortions, this is not just another example of the ignorance that she routinely displays … this is her being intentional in promoting radical right-wing ideology.

Republican attempts to define intrauterine devices as abortion-inducing drugs are equally absurd. IUDs prevent pregnancy by preventing embryos from forming. They do not terminate a pregnancy.

But facts and science are not important to the Catholic lobby or the Marjorie Taylor Greenes of the world. What is important is repeating ad nauseum the lie that equates birth control and abortion until the lie becomes the truth. Reproductive rights advocates have been battling misconceptions about birth control for decades to forestall Republican efforts to recriminalize birth control.

If that sounds ridiculous to you, here’s something you might not know: Birth control has only been completely legal since 1972. In 1965, the Supreme Court in Griswold v. Connecticut ruled that married couples were legally entitled to use birth control, but that right wasn’t extended to single people until Eisenstadt v. Baird. In 1972.

And here’s something you need to know: Republicans want to drag us back to the reproductive health-care policies of the 1960s.

But they are coming for your birth control, and they’re doing it by redefining what birth control is—just as Missouri recently tried to do.

This is a tactic. This is not a mistake of science, nor is it reason to carry on about how unintelligent Ted Cruz, Brett Kavanaugh, or Marjorie Taylor Greene happen to be. Yes, they may be unintelligent, but pretending birth control is an abortifacient isn’t about intelligence. It’s about strategy. And the strategy has been carried out by anti-choice groups since the late ‘90s.

“Increasingly, they have moved to attack and denigrate contraception,” Cynthia Dailard, then a senior public policy associate at Guttmacher Institute, lamented in 2006. “Ten years ago, the fight was all about abortion,” she told the New York Times.

Those attacks exploded after President Obama signed the Affordable Care Act into law and implemented the contraception mandate: a requirement that employers offer insurance coverage that includes birth control without co-pay.

This set off a firestorm of litigation and hand-wringing over a rather innocuous policy intended to bring health insurance costs for men and women into parity. It’s hard not to think that the Catholic Church blew its papal top because the organization was losing good Catholic women to sin: Turns out most Catholic women don’t share the bishops’ viewpoint on contraception, and they pop birth control into their mouths like so many candies from a Pez dispenser. In fact, polling in 2011 showed that a majority of Catholics supported the contraceptive mandate.

I wrote about this in 2013, back when the contraception mandate wars were just beginning, and we were still a year away from the Supreme Court ruling that for-profit corporations could opt out of providing birth control coverage to their employees:

Since Catholics apparently don’t care about contraception as much as the Catholic higher-ups would like them to, the Catholic lobby mounted a public relations campaign to make them care; and they did so by, as Sarah Posner of Religion Dispatches points out, demonizing contraceptives as “abortion-inducing” or “pregnancy-terminating” drugs. The Catholic lobby purposefully conflated contraception and abortion-inducing drugs like RU-486 (which is not covered by the birth control benefit policy) in an effort to, “broaden opposition to the rule beyond the narrow group of people opposed to contraception to people also opposed to abortion.”

Ignoring science and redefining basic medical concepts about what an abortion seemed a sure-fire way to, as I wrote then, rile up the apathetic.

So when Marjorie Taylor Greene gets on the House floor and says that birth control causes abortions, this is not just another example of the ignorance that she routinely displays as if her job were congressional jester, not congressional representative. This is her being intentional in promoting radical right-wing ideology. While the urge to mock her is strong, it’s not enough to mock her for being ignorant. It’s not enough to point to her many inane statements as evidence that she’s a crank who should never be taken seriously. It’s not even enough to retort, “birth control is not an abortifacient.” Whether certain kinds of contraceptives are an abortifacient or not is irrelevant. What’s relevant is making people think contraceptives cause abortions.

But 48 years of agitating against abortion is likely to pay off for the religious right next June, when the Court issues a ruling in Dobbs v. Jackson Women’s Health Organization. So the question becomes: What ever will they do next?

Come for your birth control, that’s what. Reproductive health advocates may have won a battle in Missouri. But the effort to convince you that birth control causes abortions is just beginning.