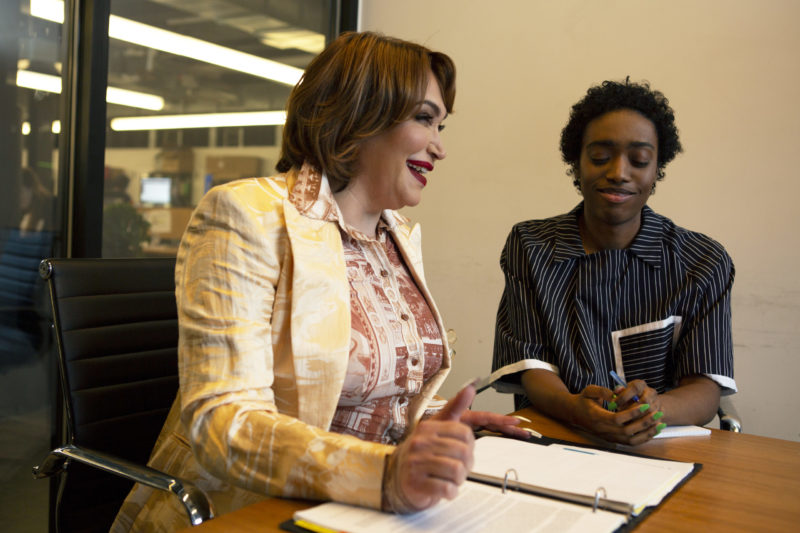 For people of color, for disabled and chronically ill people, and for trans and nonbinary folks, menopause means more than standing in front of the refrigerator and jokes about drying up down there. The Gender Spectrum Collection

Heather Corinna is hot. And no, it’s not just their flowing hair or the fact that they’ve dedicated their life to making sure young people have access to comprehensive, judgment-free, and inclusive sex ed. Corinna is, quite literally, hot—thanks to hot flashes from perimenopause and menopause, the topic of their new book out today: What Fresh Hell Is This?

But hot flashes are just the tip of the iceberg, and Corinna wants you to know that everything you’ve read about perimenopause and menopause has been influenced by a cis-hetero patriarchy that prioritizes the experiences of able-bodied white women of means.

But menopause doesn’t always look like it does in the movies, and how you experience it has a lot to do with how you’re marginalized. For starters, women aren’t the only people who go through menopause. For people of color, for disabled and chronically ill people, and for trans and nonbinary folks, menopause means more than standing in front of the refrigerator and jokes about drying up down there.

Rewire News Group talked to Corinna about the many things menopause can be: from liberating to messy to downright exhausting. The conversation, which has been lightly edited for clarity and length, touches on medical misogyny, why menopause is more than a gynecological issue, and the problem with forced positivity.

Rewire News Group: Can you tell us about misinformation when it comes to perimenopause and menopause?

Heather Corinna: Regardless of how we identify our gender, if we have a uterus and if anything that’s happening to us has anything to do with that system of our bodies, the experience that we are having is influenced by sexism and misogyny. Most menopause literature from past to present is fucking miserable. And a lot of why it’s miserable is that, in about every way possible, it’s not particularly intersectional. You know, a lot of menopause literature is very, very solidly aimed at cishet, middle- to upper-class white ladies who also have nothing else going on with their health, nothing else going on with their lives.

So even putting aside the fact that you still might experience this thing where you’ve got a bunch of stuff going on, and a doctor or a hospital or yourself might not recognize what’s happening—it’s still going to be a lot easier to at least figure [perimenopause] might be one of the possibilities when you don’t also have three other coexisting health conditions. Several parts of your life falling apart, you are skating along when it comes to your income, you are marginalized in these three other ways, so it all is just, you know, a fucking clusterfuck.

And how did that impact your perimenopause journey?

HC: One, my expectations were that it would start much later than it does, but it’s most common for it to start in people’s early 40s. You know, I kind of had it that it started in your 50s—wrong. I thought that you didn’t really start to experience impacts until you started to miss periods—also wrong. I had no idea how many things could potentially be involved. You know, I saw Fried Green Tomatoes; I knew that from popular culture. People get hot flashes because that is like the bat signal of menopause in popular culture. So I knew there was that, I knew some people had some mood issues, and certainly we are all fear-factored around sex stuff.

I certainly had no idea that it could last as long as it all lasts. I also just didn’t consider how anything else fed into it. People having experienced [trauma] is not new. So of course this has an impact. It affected my chronic pain. Of course it’s not gonna play nice with this stuff.

And there’s a misconception that menopause is strictly a gynecological issue, right?

HC: It’s particularly tricky because there’s this expectation that the people who should be educated on this are OB-GYNs. And, certainly, they see people who are having vaginal or vulva issues or people who have things like menstrual flooding. But other than that—like, if you’re having severe mental health issues with this, an OB-GYN is not the right person for you.

There’s a misogyny in these caricatures of menopause too, in that they don’t tell it to us straight. It’s patronizing, and it sets us up to fail because we don’t know what to expect.

HC: One of my favorite things about doing this book is I get to talk to a whole lot of people that I love, and Aida Manduley, who is a therapist and a sex educator, said a lot about the shitty impact of forced positivity. There’s a lot of ways that forced positivity is bad around menopause and perimenopause. There’s a lot of messaging around, this is a positive experience, this is an empowering journey. Look, if that is your experience, great! That’s not to say that’s not someone’s experience.

There’s a lot of stigmatizing of menopause and perimenopause as something that destroys you and destroys your body and makes you not sexual, and I’m certainly not in support of that. I’m in support of saying, “You know, this is potentially a decade or two of your life, so the idea that something that lasts that long is going to be universally positive or universally negative is just kind of bananas.” It lasts too long to be any of those things. It is probably going to be a mishmash of all of these things, but no matter how you feel about it, there could be some hard shit that happens.

We have great narratives around toxic masculinity and how it should be OK for men to show their vulnerability, but then women, trans, and nonbinary folks are rewarded for being “strong.” That seems counterproductive.

HC: I hear it around chronic illness, and certainly you hear it around disability, with the kind of “disability hero” status of this—like, we are strong, and it’s like yes, we can be. But also, we don’t have to be.

And one of the interesting things is that with figuring out how to get what you need to get through whatever your experience is of menopause or perimenopause, so much of the conversation is: Do you use hormones, or do you not use hormones? But so much of it really has to do with taking care of yourself, and making time and space for yourself. And that includes the space to just, like, if you’re having a day when you feel like fucking shit, or a week where you are fucking exhausted, then you know what, if at all fucking possible, go lay down for a week. So instead of being like, I will rally! Be like no, don’t fucking rally.

So for me, a lot of my rallying cry has been a lot of like, no, I can’t do that. No, I need to rest today. No, I have to bug out of work early today.

We live in a culture where anytime you have something wrong with you, the first thing people ask you is, “Well what are you doing that could have caused it?” And that’s a form of gaslighting we see over and over with medical misogyny, where patients are asked to whittle their lives down to avoid triggering a symptom.

HC: Well, you know, especially in perimenopause, just like with a lot of chronic illness, sometimes you have to make decisions about your mental health. You have to pick between what’s going on with your body and what’s going on with your brain, and you have to be like, well my emotional health needs this thing that my body is not going to like. Or my body needs this thing that is going to bum me out, but I’m going to figure out which thing I need more, and that’s what I’m going to do.

I had somebody early on say to me, because they knew I was having a particularly bad time, they were like, is your book going to also be for people who aren’t having a bad time? I was like, come on now. Would they even buy a book? I mean, sure, maybe, but I also care less about those folks. There’s nothing wrong with putting folks having a harder time in front.