Gabrielle Jackson’s endometriosis journey started like most: with excruciating and debilitating periods, pain that lasted throughout the month, and a doctor who didn’t believe her.

After years of this, Jackson was diagnosed with endometriosis—a chronic reproductive health condition that can cause pain, organ dysfunction, fatigue, and infertility. It’s estimated that 1 in 10 people assigned female at birth will be diagnosed with it in their lifetimes, but the actual incidence is probably higher as diagnosis is a fraught process that can take a decade or more for most patients.

Jackson is the author of Pain & Prejudice, which explores the way medicine fails people assigned female at birth. Her book, which came out in North America last month, paints a startling picture of what is a near-universal experience for patients: minimized pain, delayed diagnoses, and a lack of understanding of our own bodies as the result of patriarchal norms in sexual and reproductive health education.

Rewire News Group spoke with Jackson about medical misogyny and what endometriosis patients really need from providers. The interview has been edited for length and clarity.

Rewire News Group: Can you tells us a little bit about your endo journey? When did you start becoming conscious that misogyny was impacting your care?

GJ: It took me a really long time to work that out. I had, probably starting from about 14 or 15, really severe period pain and bouts of fatigue. I was diagnosed with chronic fatigue syndrome when I was 17, but no one ever addressed the period pain and I just kept getting worse. I’d have vomiting and diarrhea with my period pain, back pain would last well beyond the period, and I just couldn’t move. It was so excruciating, I would be off school every month, off uni, and typically I just went to my [general practitioner], who was a woman who had told me for years, “Look some women just get period pain, you have to put up with it.” And I said, I’m not putting up with it anymore, please refer me to a gynecologist—I don’t know anyone else who suffers like this. And, with luck, the gynecologist she referred me to was an endometriosis specialist, and I think I was talking for about 30 seconds and he said, “I think you probably have endometriosis.” He was an excision surgeon, so I had really good surgery, and I did feel better for a long time. But what I didn’t know is the fatigue and the bowel problems and the back pain and all these other things that made me feel so weak were all related to endometriosis. And that took me another almost 20 years to figure out.

And you know what really pissed me off? I had been allowed to think of myself as a weak and inferior person because medicine did not understand this very common disease. There’s a public health researcher who always says to me, “The price of success in medicine is conformity.” And that explains so much. The prevailing wisdom about women with chronic pain is that they are hysterical, so that’s the conformity that is rewarded when it comes to patients like us.

In your book, you talk about attending a conference on endometriosis and having that be the first time you were really familiarized with your own reproductive health. Why do you think it takes this catastrophic event in our lives for people assigned female at birth to be familiarized with their own bodies? 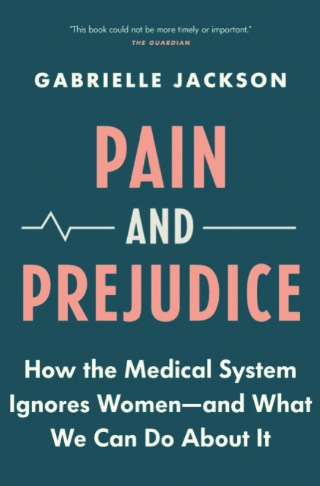 GJ: I think that it is a deliberate strategy in the oppression of women, to deliberately not teach us about our body, to not let us know what is normal, to create such stigma and taboos that we can’t even talk about it with each other, to make us ashamed to talk about things like natural bodily functions like menstruation. We are not even really allowed to talk about sex.

You know, I read a statistic that almost a third of women have painful sex constantly through their lives. A third of women aren’t even enjoying sex, and the world is still reproducing! What the fuck is going on? And you don’t just want to go, ‘Oh, the patriarchy,’—it feels so lazy. But I can’t think of any other reason why girls would not be told the names of biological anatomy in school. Why do we not know that? Why was I never taught that the labia grows during puberty? Why didn’t I know that, you know? I just don’t understand. There’s no good reason that we should be trained from such a young age to be so ashamed.

Why is decentering sexual health from conversations about endometriosis a disservice to patients?

GJ: I think it’s a problem that’s even wider than endometriosis—like not recognizing that sexual well-being is a really integral part of one’s overall health. And that is so dangerous to so many people, mostly women and gender-diverse people. It is really dangerous in endometriosis because [painful sex] is one of the most common [symptoms]. It can have a really profound influence on people’s relationships, and having healthy relationships is also integral to someone’s overall sense of well-being. You know, we talk about fertility so much when it comes to endometriosis because this is what medicine thinks women are for—to have babies. And I read some research recently, where it’s more like 15 or 13 percent are infertile if it’s treated properly.

Obviously it’s not for everyone. I tried, I went through IVF multiple times and I never had children. But it was never my priority to be treated for infertility as a patient. My priority was always pain, fatigue; I wanted my life back. And having healthy sex, being able to enjoy sex, is really important to me—to my well-being, to my happiness, and to my health.

Endometriosis patients have to become experts on the disease to access care. What do you think that does to the patient-provider dynamic?

GJ: I think if you’re marginalized—if you’re a gender-diverse person, if you are a woman of color—going in armed with facts and knowledge can often lead doctors to immediately dismiss you as someone they don’t want to deal with, as a difficult patient. For every type of person, there is a medical stereotype that will apply to you if you are knowledgeable. And so it’s very hard to balance. A lot of doctors will love a knowledgeable patient and will appreciate it, especially if they come armed with a symptoms diary or something that gives the doctor more information about the patient and what they are experiencing. But there are doctors out there who will just think that because you know so much you are an attention seeker, you are a hypochondriac, and there is actually nothing wrong with you.

It’s a very, very dangerous game for women to play, and how sad is that? You have to think, how much do I let them know I know? You have to be making decisions every time you open your mouth about what the balance is between being competent and being too knowledgeable.

What advice do you have for a patient trying to advocate for themselves with a doctor?

GJ: That is just the hardest question because while self-advocating can work for privileged people; it can backfire for people who aren’t privileged, especially for women of color. I think that we have to stop asking women to do better and start asking medicine to step up now. It should not be our responsibility to once again change medicine. If you are in a position to keep going to different doctors until you find one who believes you, then, you know, you can do that, but not many people can. People have written to me and said that they took my book to their doctor, and their doctor actually received it really well because they learned something and they wanted to help their patient.

But it’s so tricky. I once sat in on an inquest where an Indigenous woman in Australia died after going to the hospital hundreds of times to report pain, and she was never believed; she was just written off as a drug seeker. And she never got her pain dealt with. She died before someone believed her pain. And so, it’s so hard to tell people to just be strong and advocate for yourself because the reality is it doesn’t work for some people. It just makes doctors hate them more. There is no one answer I can give to that, but I do want to say: Medicine has to change. They have to listen to us, and they have to believe us; it’s well past time that they also study us.

What do you predict will be the next frontier in patient care?

GJ: One of the most interesting things that I discovered in writing my book is how chronic pain actually changes your central nervous system. So once a chronic pain state exists, the endometriosis doesn’t matter anymore. You can have great excision surgery, and that can fix a lot, but you can still have pain after that. And physiotherapy, as you said, is a very crucial part of that. But what we really need to turn our attention to now is understanding how chronic pain works and how we can fix that. Because we are so far behind in understanding that and how it works; you know, it becomes a disease state in itself. And I think understanding that can help millions of people.