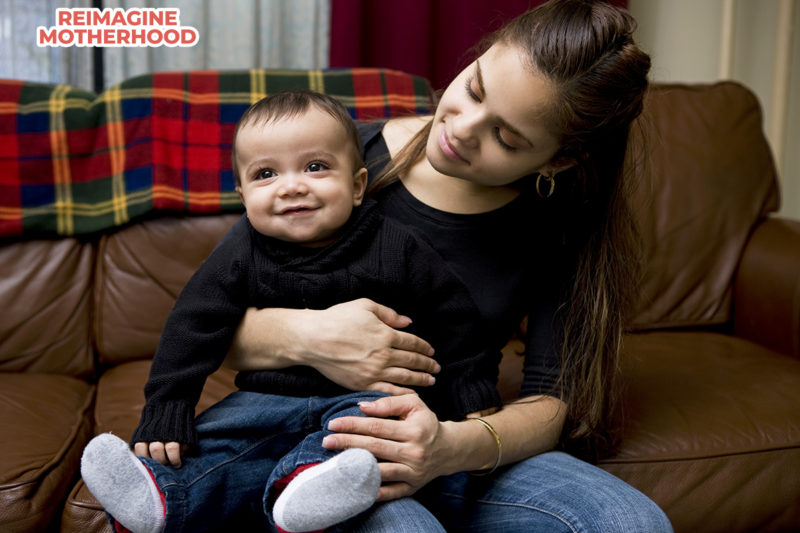 Teen pregnancy has never been the issue. The lack of support and resources for young people who choose to parent is the issue. And this applies tenfold to already marginalized young people. Getty Images

HK Gray was 15 when she found out she was pregnant with her first child. At the time, her father was homeless, and her mother was incarcerated. “I was ecstatic at the thought of having a family again,” she said.

Her pregnancy was relatively smooth—very little pain or morning sickness, and she was in good spirits the whole time.

But navigating school, work, and health care as a pregnant teen proved more challenging. Three months into her pregnancy, she dropped out of ninth grade. She was unable to reenroll when she was ready because Texas required parental consent for that. She also needed parental consent to obtain Medicaid to cover doctors’ visits and prenatal care. (States have varying laws regarding minors’ rights as parents when it comes to prenatal care, with some states allowing minors to consent to their own prenatal care, others determining the ability to consent by the age of the minor, and some even allowing physicians to inform parents if minors seek prenatal care.)

Once she was able to get Medicaid approval, though, HK found a supportive OB-GYN who treated her with respect. After experiencing some preterm labor complications at 30 weeks—which she says is common for young pregnant people—she gave birth to a healthy baby girl at 38 weeks.

HK got pregnant again when her daughter was nine months old.

“I was devastated,” she said. “I had been trying to get an IUD since my daughter had been born, but since I was still a minor I legally had to have parental consent in order to get one. I had finally just gotten consent from my mom before she went back to prison and was waiting for approval from Medicaid when I found out.”

HK chose to have an abortion—one more thing that required parental consent. Because that wasn’t feasible, HK went through the judicial bypass process (a court procedure to obtain permission from a judge), which delayed her abortion. It also made it more costly.

“Because of this I ended up being pregnant an extra 12 weeks, had to go to the clinic three different times because of Texas’ TRAP laws, and ultimately spent more money on my abortion,” she said. Following her abortion, she proceeded with her IUD insertion—that was when her OB-GYN diagnosed her with postpartum depression.

“Before I had my abortion, I had no support and was left to try to figure things out on my own,” she said. “I was the first person at my school to get pregnant, and so when other people got pregnant after me in high school they would reach out to me for support. I loved getting to be there for them, but it always made me realize that I never had the option of peer support when I was going through it. It always made me wonder if it would’ve helped with my postpartum depression or made me feel less isolated.”

According to the Guttmacher Institute, teen pregnancy rates have been steadily decreasing for decades. In 2017, the rate of pregnancies for women ages 15 to 17 was 14 per 1,000, down from 75 in 1989. These statistics are often championed by policymakers and reproductive advocates as a victory for contraceptive access and comprehensive sex education, or a barometer of societal health; high teen pregnancy rates indicate a dysfunctional society, and lower ones must mean we’re doing something right. Teen pregnancy and parenting are seen as things to prevent.

“To me a perfect world for young parents is a world with community care, supportive funding, and available mentors.”
-HK Gray

This is true even in reproductive advocacy spaces. Much of the discourse surrounding pregnancy prevention and abortion access for young people comes at the cost of stigmatizing teen parents. Policy discussions about the need for better access to contraceptives and abortion for young people quickly devolve from it’s their choice to we don’t want teens to become parents!

But it’s impossible to say minors are mature enough to make the abortion decision on their own, while simultaneously maligning those who choose to parent. This perpetuates harmful stigmas that marginalize pregnant and parenting teens. Teen pregnancy, like teen access to abortion, is about choice. It’s about ensuring that everyone—including young people—can make family planning and reproductive health decisions that best reflect their desires and what they feel is right for them. Young people who want to parent are valid, and deserve to have their choices supported; conversations about family planning for teenagers, like those involving adults, need to center reproductive choice, not pregnancy prevention.

“I think there can be this idea that if a young person is needing an abortion, it’s ‘more understandable’ because of their age,” said Paige Alexandria, weekend supervisor at the text hotline of Jane’s Due Process, a Texas organization that helps young people access birth control and abortion, and Rewire News Group contributor. “But this line of thinking can be harmful because it perpetuates the notion that there’s a ‘good abortion’—something that has been divisive among repro advocacy. It’s also harmful because it perpetuates the idea that young people continuing their pregnancies are too young.”

Many of these flawed conversations that reduce teen parenting to a taboo also reveal a significant misunderstanding of the realities faced by so many pregnant and parenting teens. Like adults managing their family planning decisions, teens who choose abortion and teens who choose parenting are not mutually exclusive groups.

“I don’t think it’s intentional,” HK said, explaining that she felt stigmatized as a teen parent, even by folks in the reproductive rights space. “But I think people can lack an understanding of what the reality of being a pregnant teen and teen parent is like, even if they have a background in reproductive justice. The best way to combat it is to support young parent storytellers.”

Teen pregnancy has never been the issue. The lack of support and resources for young people who choose to parent is the issue. And this applies tenfold to already marginalized young people.

Take young people in foster care, for example: They experience the highest rates of pregnancy among their peers, and most carry their pregnancies to term. This is likely due to a number of factors, including abysmal access to abortion and contraception. For some young people in foster care, getting pregnant and having a baby offers an opportunity to feel like they are starting a family of their own—a comfort amid the familial instability associated with the system. But a lack of resources and placements for parenting teens means that young people in foster care are often separated from their children after giving birth, whether they wanted to be parents or not.

Alexandria pointed out that the dearth of resources for parenting teens puts them at risk in the same way parental consent laws put pregnant teens at risk. Like young people who choose not to seek their parents’ support through the abortion process, plenty of young people can’t safely rely on their parents to support them through pregnancy and parenting.

“To me a perfect world for young parents is a world with community care, supportive funding, and available mentors,” HK said. She suggested services like child care funding, driving classes, GED classes and funding for test fees, resume support, financial literacy education, support enrolling in college, hiring events, and transportation help. After receiving her GED, HK was able to enroll in college with the help of Jane’s Due Process, and she says it has given her and her daughter a better quality of life.

“Young people deserve access and support in all pregnancy outcomes, whether that’s parenting, having an abortion, or adoption,” Alexandria said. They “deserve a world that considers their unique situations.”