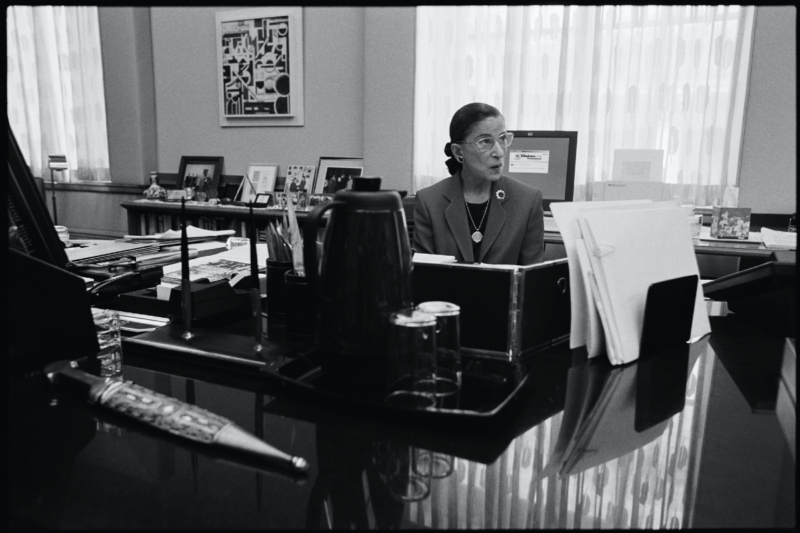 Ruth Bader Ginsburg was a paragon of what it meant to be a woman in the law, and was relatively private about her multiple battles with cancer. David Hume Kennerly/Getty Images

For more on Ruth Bader Ginsburg’s legacy, check out our special report.

When I started law school, I had big dreams. I wanted to be a staff attorney somewhere like the Center for Reproductive Rights or the ACLU. I wanted to argue cases about abortion in front of the Supreme Court. I wanted to be a part of fighting for reproductive rights in the United States, the same way my heroes—like Ruth Bader Ginsburg—had done before me.

Then I got sick.

In my first year of law school, I was diagnosed with endometriosis, a chronic health condition that can cause chronic pain, fatigue, organ dysfunction, and infertility. It is one of the most painful things a person can experience. So in other words, not ideal timing.

I spent the rest of my time in law school arguing with the administration—being asked invasive questions about my health (like for lists of my medications and treatment)—told I wasn’t allowed to take remote classes, and informed that I had to drop classes or entire semesters. Never once was my disability met with the Americans with Disabilities Act accommodations to which I was entitled.

My big dreams became impossibilities. My body was no longer capable of the long hours I had always planned on working. Beyond that, I was trapped in a system that refused to acknowledge my humanity and professional worth, simply because I was sick.

Ruth Bader Ginsburg was a paragon of what it meant to be a woman in the law. But as a sick woman, she carried a special place in my heart. Ginsburg was relatively private about her multiple battles with cancer and I, like so many others, watched in awe as she worked through what were undoubtedly arduous treatments and surgeries.

As we look back on Ruth Bader Ginsburg’s death six months later, I’m still mourning the loss for the legal community.

I have no idea how she did it. Most of my law school experience was spent sitting in the back of classrooms, watching the board go in and out of focus as I tried not to pass out from pain. It was spent sending emails to professors begging for understanding and leaning on the few peers I could trust to send me notes from the days I missed. It was also spent learning the hard way that law school—and the law writ large—is deeply ableist.

Ginsburg featured prominently in the discourse among my peers, as I’m sure was the case in practically every law school classroom around the country. She was and remains the Notorious RBG; her opinions and her legal advocacy before she joined the bench on issues of gender inequality still touch our lives every day.

But as Ginsburg aged, I found the discourse around her health troubling, especially as a sick woman trying to navigate this same inhospitable profession. Classmates sat with me at lunch tables and study groups and talked about how Ginsburg should step down because she was sick or how she should sacrifice her career because her health made her a liability. I bit my tongue during those conversations, afraid if I was too loud about my own sickness that my peers and teachers would start to see me the same way.

I knew they already did, though. I’ll never forget the teacher whose syllabus read “No bathroom breaks. If you have an overactive bladder, restrict fluids.” At the time, my uterus and bladder had fused and endometriosis had penetrated the wall of my bladder, causing me to pee every 15 minutes, no matter what I drank. It was a situation so dire that it required the reconstruction of my bladder, after which I had to use a catheter for two weeks. I dropped the class immediately.

I can’t really speak to the particulars of how Ginsburg navigated her work while sick, though I know she had practice. She famously sat in on her husband Marty’s classes at Harvard when he had cancer. And she was well into her career, established and respected in the profession, when she was first diagnosed. But the reality is there are a lot of valuable legal minds who don’t get the chance to establish themselves before they get sick. And this profession is kicking people out before they come in the door, simply because they are disabled or chronically ill.

As we look back on Ginsburg’s death six months later, I’m still mourning the loss for the legal community. Her work on gender inequality and reproductive rights alone has shaped the nation. But looking forward, if we want more RBGs—if we want to ensure this profession is one robust with inclusion and empathy—we need to take a long hard look at the ableism steeped into legal education and practice.