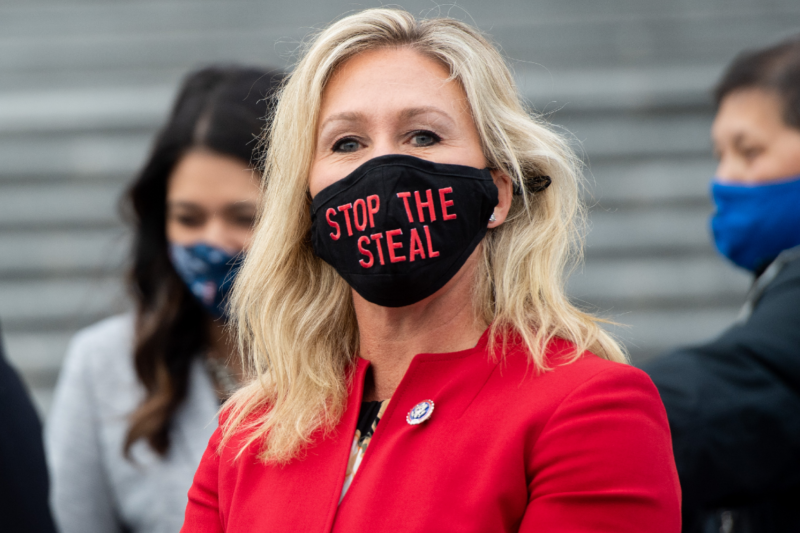 “I’m facing a prison sentence. I think I do not deserve that. … I would ask the president of the United States to give me a pardon.”

Those are the words of Jenna Ryan, a Dallas-based real estate agent who flew on a private jet to Washington, D.C., to join the “Stop the Steal” rally that quickly morphed into an insurrection that left five people dead.

Ryan left a trail of evidence of her misdeeds on social media. She posted videos and photographs to Facebook and Twitter, according to court documents. In one photo, Ryan is standing in front of a broken window at the Capitol with the caption “Window at The capital [sic]. And if the news doesn’t stop lying about us we’re going to come after their studios next.” In a Facebook Live video, Ryan is featured trying to walk through the entrance of the Capitol, which had visibly broken windows. At the beginning of the video, which has since been deleted, Ryan says, “We are going to fucking go in here. Life or death, it doesn’t matter. Here we go.”

After she and her fellow red hats had breached the Capitol, Ryan tweeted, “We just stormed the Capital [sic]. It was one of the best days of my life.”

And if you can imagine that—or if the thought never crossed your mind—well, gather round and let me talk to you about privilege.

Privilege is a funny thing. It comes in all forms. But whatever the form, you can be assured that a lot of people will insist they don’t have it.

There’s white privilege—like being able to walk into a drugstore and find your hair care products displayed openly on the shelves rather than in a glass enclosure under lock and key in an aisle marked “ethnic hair care.”

And then there’s what I’m going to call white privilege extreme: breaking into and looting a federal building and expecting that you won’t face any consequences, and when you do, complaining that you deserve a pardon. White privilege extreme is the Axe body spray of privilege: It is in your face, and it is offensive. (Incidentally, a can of Axe body spray was left in the Capitol, but that’s neither here nor there.)

“White privilege? In this economy!? Fuck you. I don’t have any privilege.”

Well actually, yes, you do.

Here’s the thing about privilege: There are all kinds. There’s privilege based on race, gender, sexual orientation, gender identity, religion, citizenship status, and on and on. (A great primer on the concept is Peggy McIntosh’s “White Privilege: Unpacking the Privilege Knapsack.”)

And you know what? Almost every single person on the planet has privilege in some form or another.

I have class privilege. I make a decent living now and I grew up upper-middle class. I never wanted for anything that I needed, and I rarely want for anything now.

One might even say that I’m white-privilege adjacent. My mom is white, and growing up, I had access to her white privilege.

For example, when schools refused to put me in gifted or Advanced Placement classes (because I was a loud hyperactive Black kid and, really, how smart could I be?), my mom would gather every ounce of her white privilege and take time from work to go to my school administrators and give them a stern talking to. And wouldn’t you know it, I was always placed in the AP classes I should’ve been assigned to in the first place. That my mom worked a job that allowed her to take time off to be heavily involved in my schooling is another form of privilege. Most working-class parents don’t have that luxury.

But although I have class privilege, I am also Black. (Surprise!) And being Black means that I have disadvantages that white people, as a general rule, simply will never have. The simplest interactions can be fraught with racial terror. Most white people can walk through the mall without security guards or store clerks following them around wondering if they’re going to steal something. Most white people don’t have panic attacks when they are pulled over by the police, wondering whether or not a simple traffic stop will escalate into something far worse.

To put it plainly, white people, including white women, have advantages simply by virtue of their skin color—advantages that I will never have. These advantages are often invisible. These advantages are also unearned. And that’s why telling someone that they have privilege when they’ve never even thought of the word privilege much less applied the concept to their own existence can be difficult. Because in their mind, especially for people who are struggling to make ends meet in this economy, they have worked really hard for everything that they have and they’ll be good and goddamned if some “woke mob” is going to tell them that maybe—just maybe—some of what they achieved is due to this privilege—due to circumstances beyond their control. They never asked for privilege so how could they possibly have it?

I bet plenty of white people in the mob that breached the Capitol would vehemently deny having privilege, even as law enforcement escorted them onto the Senate floor or stopped to pose for selfies.

But if the Jenna Ryans of the world didn’t benefit from white privilege, they would have known that livestreaming themselves committing crimes was a terrible idea. They wouldn’t have fathomed being able to scale a 30-foot wall, breach Capitol security, and force some members of Congress to barricade themselves on the House floor while others were evacuated, so they could post photos of themselves with their feet on House Speaker Nancy Pelosi’s desk and wander around the Capitol looking for members of Congress to harass and—if the reports are any indication—potentially kill.

They were able to behave this way because as white people, their interaction with law enforcement is different than Black people’s. No mob of Black people would have gotten within two city blocks of the Capitol without the full weight of law enforcement crushing them. And they certainly wouldn’t be giving cutesy interviews with local media begging for pardons and talking about their biggest concern being where to go to the bathroom. That was Jenna’s “biggest concern”—that “there were no porta-potties … because I like to always know I have a bathroom nearby.”

My biggest concern, as a Black woman, would have been getting shot like Miriam Carey was. And I certainly wouldn’t have the unmitigated gall to announce that I deserve a pardon for joining a mob whose intent, at a minimum, was to overthrow the government.