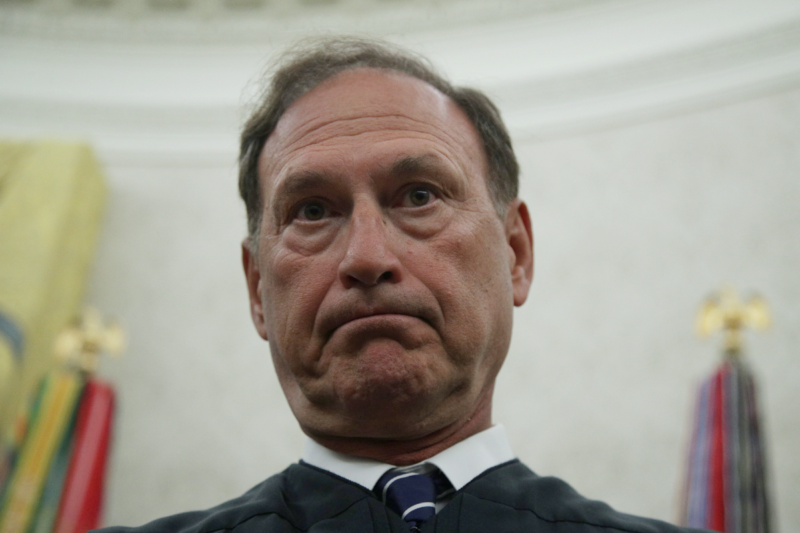 Justice Samuel Alito is big mad that a bunch of states decided it might not be a good idea for Christians to crowd nuts to butts into churches, and because of a public health crisis, and tried to restrict the First Amendment right to assemble with a bunch of virus-ridden children of God. Alex Wong/Getty Images

Hello. Your friendly neighborhood Angry Black Lady (@angryblacklady) here to talk to you about how the Trump administration is, predictably, being a jerk when it comes to medication abortion access, and how Samuel Alito is one angry little man when it comes to abortion rights.

And I’m going to do it in GIFs because everyone loves a GIF, and why not see if there is, indeed, a Schitt’s Creek GIF for every occasion.***

Last Friday, the U.S. Supreme Court issued its first abortion rights ruling of the new term, and it was relatively uneventful. The case, ACOG v. FDA, relates to how the Food and Drug Administration’s outdated requirements on medication abortion are making it difficult for pregnant people to access medication abortion during the COVID-19 pandemic.

When the pandemic hit, the FDA moved swiftly on telemedicine and removed the requirements for face-to-face appointments between doctors and patients for a number of drugs, including palpably dangerous drugs like oxycontin and fentanyl.

That’s because, to put it bluntly, people need to stay the fuck home as much as possible.

But the FDA continued to require in-person visits to obtain one pill: mifepristone.

“What the hell is that?” you might be asking. Mifepristone is one part of a two-pill regimen that a pregnant person can take to terminate a pregnancy. If you’re doing a self-managed abortion, first you take mifepristone. It works by blocking the hormone progesterone, which causes the lining of the uterus to break down so that the pregnancy cannot continue. And then, 24 to 48 hours later, you take a second oral drug called misoprostol, which induces contractions and ends the pregnancy by expelling the contents of your uterus.

Many people prefer medication abortion (or self-managed abortion) because they can do it in the privacy of their own home and because it means they don’t have to get a procedural abortion, which is more expensive.

“OK, so what does this have to do with the pandemic?” is what you’re probably thinking.

Hang on, I’m getting to it.

So we’re in this pandemic. And telemedicine just makes sense. Why force unnecessary face-to-face meetings between patients and doctors. It’s just as easy to hop on Skype and talk to your doctor, who can then prescribe the necessary medication so you can pick it up at a local pharmacy.

But when it comes to the abortion pill, there is a different set of rules.

A patient has to travel to a clinic or hospital to pick up the medication and sign a form. The pregnant patient doesn’t even have to take the pill in the presence of a doctor. They just pick it up and sign a form. In fact, out of more than 20,000 drugs approved by the FDA, mifepristone is the only drug that a patient has to pick up in a clinical setting but can self-administer wherever they want, unsupervised.

How does that make any sense?

It doesn’t. And that’s why the American College of Obstetricians and Gynecologists filed a lawsuit against the FDA and asked a district court judge in Maryland to block the agency from enforcing those requirements. And the district court did just that. The court found that requiring people seeking a medication abortion to pick up the mifepristone in person during the pandemic constitutes an undue burden on the right to an abortion and issued a nationwide injunction.

But not to Justice Samuel Alito, who managed to make a mundane ruling based in civil procedure about how the justices are using the pandemic to screw people of faith and expand abortion rights.

“While COVID-19 has provided the ground for restrictions on First Amendment rights, the District Court saw the pandemic as a ground for expanding the abortion right recognized in Roe v. Wade.”

See, Alito is mad that a bunch of states decided it might not be a good idea for Christians to crowd into churches nuts to butts, and because of a public health crisis, tried to restrict the First Amendment right to assemble with a bunch of virus-ridden children of God.

In Alito’s world, the Supreme Court has essentially given the thumbs-up to those states that have restricted people’s religious freedoms due to the plague while giving pregnant people carte blanche to take abortion pills by the mouthful.

Alito is predictably whining about nothing. His complaints don’t even make sense, but it falls right in line with Christians’ persecution complex. First, the government tells Christians that they can’t gather in the name of the Lord at super-spreader events. And then what? Is the government going to force Christians to bake cakes for gay people?

When does it end?!

I don’t have the answer to that question, but what I can tell you is that if you want to get a medication abortion, you don’t have to drive out of your way to pick up a pill to do so.

At least for now.