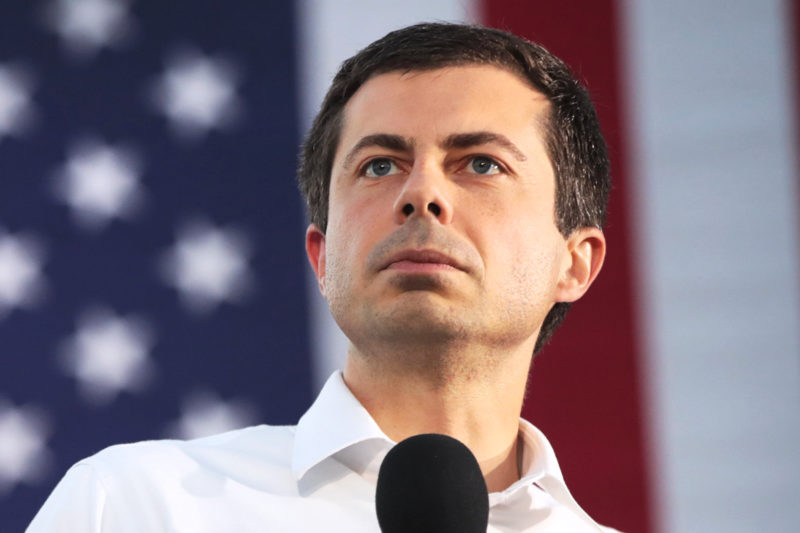 Buttigieg’s suggestion assumes the Court and all of its actors are non-partisan, despite all evidence to the contrary. It’s just not true and it’s really never been true. Scott Olson / Getty Images

Democratic presidential candidate Pete Buttigieg on Thursday lit the internet on fire after Cosmopolitan ran an interview with the mayor of South Bend, Indiana, that discussed everything from Medicare for All to moon signs (his is in Virgo). But it wasn’t Buttigieg’s thoughts on beef jerky that set Twitter on fire (he’s a fan); it was his thoughts on how to fix the problem of Republican control of the federal courts.

One idea Buttigieg floated was expanding the U.S. Supreme Court from its current nine-member bench to 15, with a staggered appointment process. He proposed that five of the 15 justices would be seated only if the other ten justices voted unanimously on their appointment. Here’s the excerpt from Cosmopolitan that caused all the fury.

So I’ve floated several ideas and deliberately kept some level of open-mindedness about which ones are going to work best. One of them would be to have 15 members, but 5 of them can only be seated if the other 10 unanimously agree. The idea here is you get more justices who think for themselves. Justices like Justice Kennedy or Justice Souter, and there are many legal scholars who think this could be done without a constitutional amendment under current law.

I have a lot of questions about this plan—including how it is supposed to address the over 150 judges Republicans have so far confirmed to district and appellate courts during Trump’s tenure as president, or why I feel like I’m working through a PSAT math question to understand Buttigieg’s proposal. But that’s not what got Buttigieg in trouble on Twitter. It was Buttigieg’s invocation of Justice Anthony Kennedy as some kind of independent-minded, and presumably nonpartisan, justice that drew the internet’s ire.

To Buttigieg’s credit, his campaign quickly reached out to Rewire.News to clarify the comments in Cosmopolitan. A spokesperson directed me to comments Buttigieg made at a campaign stop yesterday in New Hampshire where he identified Justice Ruth Bader Ginsburg as the kind of justice he’d nominate should he be elected president. He also released a policy plan this week designed to build power for women, and it includes using support for reproductive rights as a litmus test for future judicial nominees.

I’m glad to hear Buttigieg isn’t interested in nominating some kind of Kennedy-clone, especially considering the most likely coming retirements from the Court will be Ginsburg or Justice Stephen Breyer. The last thing Democrats need to do is appease Republicans more when it comes to the federal courts. But I don’t think that solves Buttigieg’s problem here.

That’s because there are few myths as persistent as the myth of Justice Anthony Kennedy as an independently minded justice and the Supreme Court as a nonpolitical institution—and yesterday Buttigieg advanced them both.

A quick study of Supreme Court history shows why Buttigieg’s claims fall apart as soon as they are interrogated. Republican President Ronald Reagan nominated Kennedy to the bench in 1987 following the retirement of Lewis Powell Jr. Kennedy was Reagan’s third choice to fill the vacancy. Former Nixon Solicitor General Robert Bork’s extreme opposition to abortion rights and anti-civil rights record made him a natural first choice for Powell’s seat. But Democrats organized a “solid phalanx of opposition” against Bork to block his nomination back when Democrats were able to successfully function as an opposition party. Reagan’s second choice, Douglas Ginsburg, withdrew his name from consideration after admitting to smoking pot in the wilder days of his youth. That left Reagan with Kennedy, then a judge on the Ninth Circuit Court of Appeals after being appointed by Republican President Gerald Ford on the recommendation of Reagan.

Kennedy was Reagan’s third choice for the Court, but not because Kennedy was some kind of independently-minded centrist. Kennedy was Bork’s eventual replacement because Bork’s nomination was designed to appease religious conservatives who were upset over Reagan’s earlier appointment of Justice Sandra Day O’Connor to the Court.

Reagan had pledged to nominate a woman to the Supreme Court if he won the presidency, and O’Connor was his first choice. Anti-choice advocates immediately mobilized against her nomination, concerned that she would not be a reliably anti-choice vote. But Reagan pressed ahead, secure enough in her comments that she was personally opposed to abortion to not worry that she would be a “pro-abortion” vote on the Court. O’Connor was unanimously confirmed and, despite her vote to affirm abortion rights in Planned Parenthood v. Casey, consistently sided with conservatives in abortion rights cases.

That left evangelicals mad about O’Connor, so Reagan needed to mend those fences with a true ideologue that evangelicals would embrace. That was supposed to be Bork, but conservatives got Kennedy instead. It worked out okay for them. Justice Kennedy proved to be a reliably conservative and partisan vote. He helped deliver Bush v. Gore, Citizens United, and the decision upholding the Muslim Ban, just to name a few conservative victories under Kennedy’s watch. These are three of the most partisan Supreme Court decisions during Kennedy’s time on the Court, and he is at the center of each of them—not driving ideological or nonpartisan compromise, but ensuring conservative victory under a cloak of purported centrist legitimacy.

And that’s what’s so dangerous about Buttigieg’s comments in Cosmopolitan. They advance the Kennedy myth and allow conservatives to erase the very real damage he did during his time on the Court.

There is no denying Kennedy’s importance in advancing LGBTQ rights, and Buttigieg has talked in really lovely, personal ways about the importance of the Court’s marriage equality decision, Obergefell v. Hodges. Kennedy’s decision is affirming and beautiful, and, as I’ve said, an inherently conservative one. But even that bright light in Kennedy’s time on the Court is dimmed by his partisanship. Kennedy had an opportunity to more robustly protect LGBTQ rights and his own jurisprudential legacy in Masterpiece Cakeshop v. Colorado Civil Rights Commission but chose instead to punt on the case. The result has been to leave both LGBTQ people and the strength of Obergefell vulnerable to attack by conservatives and the Trump administration.

But nothing left LGBTQ people and Kennedy’s own legacy more at risk than his decision last summer to retire. Unless Kennedy was living under a rock, he knew the Trump administration had the rights of LGBTQ people teed up for rollback and that anyone named to replace him would be a reliably anti-LGBTQ vote. Despite campaign promises to the contrary, President Trump has shown his administration is not at all interested in affirming the “dignity” of LGBTQ people that Kennedy’s Obergefell decision praised. So when it came to choosing between the lives of LGBTQ people and the peace of mind of knowing a Republican would name his replacement, Kennedy chose the latter.

And it’s what makes Buttigieg’s suggestion—that Kennedy could be a model for a coalition judicial candidate that other justices on the Court would elevate in some kind of nonpolitical vote, as envisioned in his Court plan—so strange. It assumes the Court and all of its actors are nonpartisan, despite all evidence to the contrary. It’s just not true and it’s really never been true. The sooner we bury this myth of American judicial exceptionalism, the better. Our federal courts are political. They’re often partisan. And we won’t deal with reforming them, let alone fixing the disaster we face thanks to Republican capture and control of them, by pretending otherwise.