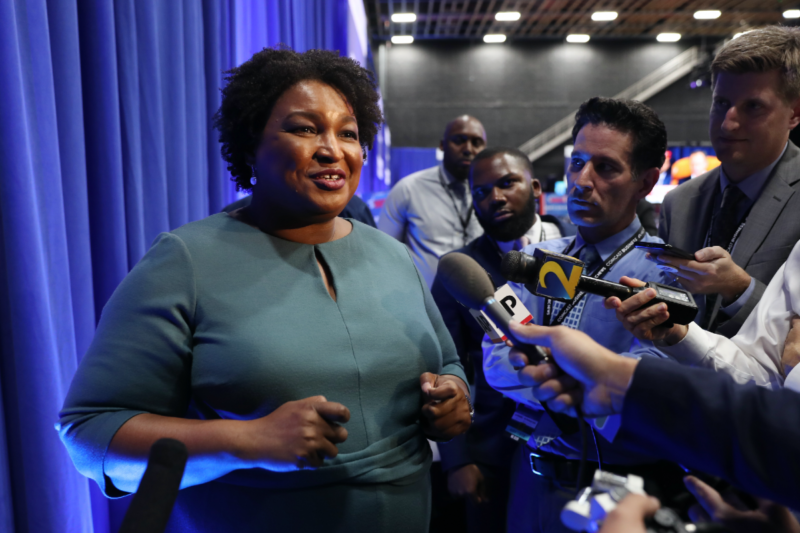 Stacey Abrams sets the bar for winning at engaging communities on the issues that matter and building a coalition that reflects the country we want to live in. Joe Raedle/Getty Images

During Tuesday night’s Democratic response to the State of the Union, former Georgia State House Minority Leader Stacey Abrams showed the nation what it means to lead on the issues while representing a diverse coalition. Over the course of her roughly ten-minute response, Abrams centered the principles of unity and togetherness, outlining a simple vision for the 2020 field and Democratic politics as a whole.

Abrams’ address offered a starting point for developing the transformative political apparatus necessary to win back the White House while addressing the needs and conditions of people who have been left out each election cycle and every time in between. From students in poorly resourced schools to displaced workers (and those working without labor protections), Abrams reinforced the notion that all people are entitled to the freedom to thrive, which requires people be provided with the support, tools, and resources necessary to succeed.

Grounded in an “uncommon grace of community,” Abrams’ message sternly rejected running behind Republicans to try to pick off their voters. She instead embraced a list of policies in dire need of action. She spoke past Trump, laying out criticism and critique while owning and controlling her agenda. Abrams could teach a master class in storytelling, weaving in personal anecdotes and observations with policy points that directly connect to the experiences felt by millions across the country.

Reflecting on the Abrams speech and her historic campaign for governor of Georgia, five major points stood out as lessons for politicians looking to challenge Trump in 2020.

At the outset of her remarks, Abrams owned the moment instead of simply providing a response to Trump. She directed a conversation about the state of the union grounded in racial, social, and economic justice. Discussing health-care reform, Abrams reflected on her own financial struggle with the burden of medical bills after her father had cancer.

Like Abrams, candidates running in 2020 need to own their narratives and message. Whether it is addressing Trump or their own records and platform, candidates should meet the issues head-on. Deflection only breeds distrust and leaves space open for interpretation. Making everything about Trump, or allowing Trump to set the tone, does little to engage the voters who tuned out in 2016 after feeling that no one was speaking on the issues that matter to them. The 2020 electorate needs something better than the message that Trump is bad.

Redefine what it means to win

Throughout her tenure as minority leader of the state house and during her campaign for governor, Abrams did not allow the shortcomings or insecurities of others to hold her back. When she decided to run a campaign that focused on expanding the electorate and reaching out to voters commonly ignored in traditional races, she took her fate into her own hands. When Abrams was first elected house minority leader, she worked to reclaim lost seats by investing in previously neglected districts. Although she was denied the Georgia governorship, Democrats under Abrams leadership once again added seats in the state legislature.

Abrams’ State of the Union response kept that same focus on redefining winning as something more than simply defeating Trump. Instead, she sets the bar for winning at engaging communities on the issues that matter and building a coalition that reflects the country we want to live in. Winning in 2020 and moving beyond winning the presidential election challenges Democrats and those organizing in Progressive electoral spaces to develop a long-term strategy that must include systemically improving the lives of people across this country. Otherwise, defeating Trump simply returns us to the status quo and does little to uplift people.

During her historic run for governor, Abrams framed her campaign’s organizing around building a coalition and community. She sought to connect with the people who were invested in not only seeing the state shift red to purple but also in seeing a better vision for the future. In various interviews over the past week, Abrams explained the need to build a diverse coalition and how to do so successfully.

Abrams recognizes that commonality does not require hiding our authentic selves and struggles. In her coalition building, she provided space for different people to come together without forcing them to leave a part of themselves behind. This came across in her response Tuesday night as she discussed community while rejecting “a false image of universality.” A cookie-cutter approach cannot be applied to all constituencies. Candidates running for president must not only recognize the strength in diversity but allow space for organizers and supporters to lead in their communities.

Give people something to vote for—not against

In a recent essay, Abrams said, “The truth is that when people do not hear their causes authentically addressed by campaigns, they generally just don’t vote at all.” That’s because people need to feel that participating in the system will lead to a material change in their lives. Too many have gone out and voted only to see little to no change around them. The economic anxiety used to excuse Trump voters runs deeps in communities of color across the country. Yet outreach with communities of color rarely contains an economic agenda.

During her speech, Abrams set forth several major challenges that require a clear response from Democrats seeking to lead the nation, including student loan debt, climate change, and voter suppression. Those campaigning to serve as the next president should model Abrams’ response in how they approach potential voters. Voters are tired of posturing and poorly executed attempts at being relatable. People are tired of political jockeying and need to hear their issues addressed.

During her response, Abrams stressed the importance of election integrity. More than a mantra, making sure every vote counts and fighting against rampant voter suppression is a necessity. This is the second presidential election post-Shelby without the full protection of the Voting Rights Act. Over the past three years across the country, we have already seen the effects of massive voter purges, poll closures, and uncounted ballots. The Georgia race for governor clearly encapsulated the dire impact of voter suppression on our democracy. Election integrity undermines the vitality of our democracy, and 2020 candidates need to have a clear strategy for addressing these problems and not leaving local organizers or the local party to sort things out.

The Abrams speech also provided a mechanism for holding candidates and elected officials accountable to the issues and spaces they claim to represent. Abrams balanced political vision with building a transformative political apparatus that did not comport to traditional notions of appeasing the elusive “moderate Republican” voter. Following Abrams’ example of building a collective grounded in equity and justice across diverse constituencies, Democrats must continue to expand access and opportunity at the ballot box.

The fierce battle being waged for election integrity in Georgia shows there is real energy to move electoral politics into a new age that centers equity, justice, service, and responsibility to our communities ahead of special interests. This is a wake-up call to anyone seeking the presidential nomination or running down the ballot: To get the unwavering support necessary to win, you must be willing to do the work. Beyond defeating Trump, candidates must be willing to build the infrastructure to scale and learn the lessons necessary to win. Directly benefiting the lives of millions of people across the country and abroad should be at the center of any Democratic platform in 2020.

It is easy to look at the 2020 field and pick apart what we do not like about the candidates. But regardless, we should want to see a better process that tackles the issues affecting the nation and centers equity and justice at the core. The path set forth by Abrams on Tuesday night provides a template for candidates to adapt and modify to fit their own authentic spaces. Whether any choose to do so is entirely up to them.