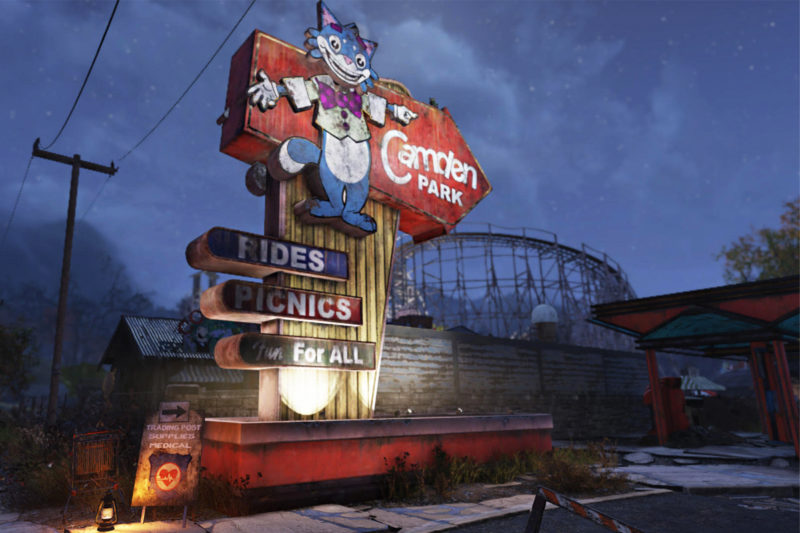 In a haunting depiction of West Virginia, deeply steeped in both the lore and the realities of the state, Camden Park's Big Dipper, renamed the Widow Maker, is a rise-and-fall replica of the original. Bethesda Softworks LLC

Like most West Virginians, I approach pop culture depictions of my home state with trepidation.

I expect to see the complex reality of my homefolk erased by stick characters, like the murderous hillbillies of the Wrong Turn films or the sad hillbillies of The Wild and Wonderful Whites of West Virginia. I expect to see only poverty, in spite of the state’s pockets of great wealth. Mostly, I expect West Virginia will be treated as an idea, with very little attention paid to the state’s multifaceted nature.

I am, then, pleasantly surprised by the complex rendering of West Virginia in Bethesda Game Studios’ new release, Fallout 76. The latest installment in the venerable, post-apocalyptic role-playing video game franchise, it’s the first of the games to be multi-player. Set 25 years after nuclear war has destroyed the region (and, presumably, most of the world), the game focuses on rebuilding—through resource gathering, camp building, and monster killing—a new, post-war world centered in West Virginia. But Fallout 76 is not set in the popular imagination about West Virginia, but in the complicated physical and cultural realities of the state.

The design director at Bethesda Game Studios, Emil Pagliarulo, said in an interview with games and entertainment website Polygon: “I hate ‘redneck post-apocalyptic’ … It’s very cliché, stereotyped. And that was really important for us, to not stereotype the people or the culture and to not go down that road, and to treat it with respect.” The careful work that went into realizing this mandate can be seen throughout the game. As a player, you enter the game through Vault 76—a fallout shelter meant to house people through the toxic years—and find yourself in a wooded area just outside of Flatwoods.

And the thing is, these are the right woods, with the right trees, the right bird songs, with rhododendron and fern.

The game’s recorded voices have a variety of accents, from the deep drawl of the middle counties to the clipped consonants of a non-native speaker, but all of them feel authentic and, except for a few robot characters clearly programmed to be “down homey,” none seem overdone.

It’s important to note that this is, by necessity, an abbreviated West Virginia. Not everything is where it should be, and many things are missing altogether. Huntington is gone—though several of the city’s key landmarks are scattered around the map—as are many of the smaller towns. But what’s missing matters less than what’s included.

Players head to Morgantown, where they find a faithful re-creation of West Virginia University’s (WVU) Woodburn Hall. It was uncanny, and a little cathartic, to stand in the room where I once studied the poetry of Hilda Doolittle and fight off the zombie-esque creatures that have overtaken the campus. But it was even more surprising to head out to the airport and discover that the game designers had taken the time to accurately depict that unremarkable concrete building. A favorite bar, a pepperoni roll factory, and WVU’s weird monorail all make it into the game.

Not all towns have fared as well. Clarksburg is nearly rubble, and Grafton is led by a despotic computer that has elected itself mayor, against which there are daily protest marches. Strike-breaking robots have overrun Beckley, though you can still visit the exhibition mine. Pleasant Valley has been moved and is now a tourist attraction called Top of the World, besieged by powerful Super Mutants.

These creatures are the direct result of outside corporate interests exploiting the people and environment of the state—and while this is a constant throughout the Fallout franchise, it feels especially apt in a game set in West Virginia.

Huntington may be gone in the game, but Camden Park still stands. The Big Dipper roller coaster has been aptly renamed “Widow Maker” and is a rise-by-fall replica of the original. Up the road a little too far, you will find Hillbilly Hotdogs (renamed Hillfolk Hotdogs), still in its iconic trailer with a boat on the roof and a yard full of plastic flamingos. The Gov. Jim Justice–owned Greenbrier, renamed “Whitespring Resort,” offers all the luxury of the original hotel, as well as access to the famous congressional bunker and a quest to join a secret society. There are shacks and vernacular farmhouses aplenty, but the landscape is also dotted with the sort of family manses one expects to find in and around Bramwell.

This is West Virginia in all its complexity.

My favorite two West Virginia “in-jokes” may be lost on the majority of players, because they require a pretty deep knowledge of the state. The first is the game’s prison-and-meditation retreat, a mash-up of New Vrindaban and the Moundsville State Penitentiary. The other is the makeshift, post-war town of New Gad in the dry lake-bed behind the now-destroyed Summersville Dam.

Gad was, in the real world, a small farming community destroyed by the Army Corps of Engineers in 1960 to create Summersville Lake; in fact, Corps of Engineer protocol called for naming the lake and dam after the destroyed town, but they opted not to name it “Gad Dam.”

Much of the fighting in the game is against standard Fallout foes: zombie-like, militarized robots, and powerful super mutants. But these hills are also home to some familiar cryptids from West Virginia’s local mythology. In Point Pleasant, players will find the Mothman Museum; Mothman himself appears throughout the game in several guises. The Grafton Monster shows up in regularly scheduled parades through the town, and the Flatwoods Monster can be found in various places around the state, though none of them near Flatwoods. Wendigos, lifted from Algonquin folklore, roam the area looking for human flesh to eat. There are also mutated local fauna, like two-headed “rad stags” and mutated mole rats.

While some of the monsters here, such as scorchbeasts, are original to Fallout rather than Appalachian lore, they fit right in.

The game invokes a strange sort of nostalgia. This is the future, but in an alternate timeline, and it looks something like West Virginia had the Jetsons visited. Everything has a 1950s-imagines-the-1990s feel, a mixture of vernacular Appalachian architecture and mid-century modern design. It’s as much the Appalachia of my childhood as it is the one of today, though with futuristic flourishes.

The songs that pour out of the radios and jukeboxes, eerily playing through the devastated landscape, are classics from the mid-twentieth century: “Sixteen Tons,” “Dark as a Dungeon,” and of course a version of “Take Me Home, Country Roads.” There are more fedoras and bowler hats in the game than baseball caps, and the abandoned cars along the roads are more likely to be a 1959 DeSoto than a 2018 Chevy Tahoe. This is a West Virginia populated by what never was and the uncannily familiar in equal measure.

Across the internet, game reviewers are calling this Fallout “disappointing” and even “busted.” I’m not qualified to say what the game designers might have gotten wrong—this is the first game in the franchise I’ve played, and although I am a gamer, I usually play larger, more fantastical multi-player games like World of Warcaft—but I can say what they’ve gotten right in Fallout 76.

This is a lovely, haunting depiction of West Virginia, deeply steeped in both the lore and the realities of the state. It’s neither overly sentimental nor unrelentingly grim—both things I’ve come to fear from fictional Appalachias. It is, instead, a poignant and credible recreation of West Virginia as it might have been, and hopefully never will be.