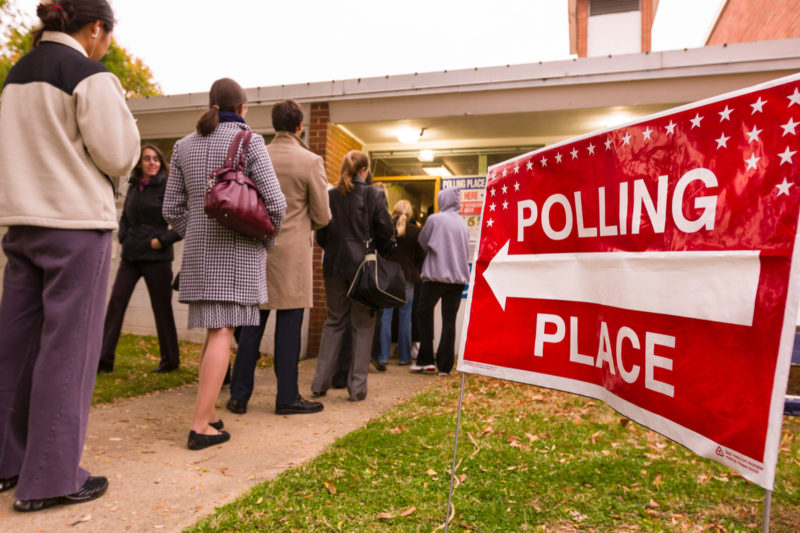 Constitutional amendments on the ballot this year could create the legal groundwork to criminalize abortion in some states should Roe v. Wade fall. Rob Crandall / Shutterstock.com

Whether Democrats or Republicans win control of state governments next week may determine how each state legislates reproductive rights in the coming years. But voters will weigh in directly in three states where abortion is literally on the ballot: Alabama, Oregon, and West Virginia—two of which are moving to explicitly state that abortion rights aren’t protected within their borders.

The three ballot measures come at a tumultuous time for abortion in the United States. Reproductive rights advocates fear that with Justice Brett Kavanaugh on the bench, the U.S. Supreme Court could dismantle the 1973 Roe v. Wade decision that guaranteed the right to an abortion, which would leave abortion rights in the hands of state lawmakers. The Center for Reproductive Rights (CRR) estimates that access to abortion would be at high risk in 22 states if Roe falls. The referendums on the ballot this year signal that at least two state legislatures are already preparing for that hypothetical.

“We can no longer depend on a court that will refuse cases or rule using Roe v. Wade as precedence,” Cindi Branham, an activist with the Alabama Reproductive Rights Advocates, explained in a statement to Rewire.News.

Similar to “trigger bans” in place in Louisiana, Mississippi, North Dakota, and South Dakota to criminalize abortion in the absence of Roe, reproductive rights advocates say the constitutional amendments on the ballot this year would create the legal groundwork to do the same in Alabama and West Virginia.

Even states known for progressive reproductive rights policies face contentious abortion debates, as is the case in Oregon where voters are debating whether Medicaid should fund abortion services. While this ballot measure isn’t nearly as extreme as the proposed constitutional amendments, its opponents say it would severely limit access to abortion services in the state.

Here’s what you need to know about the abortion referendums on the ballot next week.

Republican legislators aimed to make Alabama the third state, after Missouri and Utah, to formally protect the “right to life” by approving Amendment 2 for the November ballot in April 2017. If passed, Amendment 2 would add language to the state constitution giving a fetus the same rights as a person by declaring that “it is the public policy of this state to recognize and support the sanctity of unborn life and the rights of unborn children.” Giving fetuses legal rights, or “personhood,” could lead to the criminalization of some forms of contraception and in-vitro fertilization. The ballot measure’s language also says the state constitution “does not protect the right to abortion or require the funding of abortion.”

The proposed amendment doesn’t make any specific actions illegal, but signals that state policy will protect the rights of “unborn children” over the right to have an abortion. It would essentially act as a “trigger ban” and completely outlaw abortion should Roe fall, even though Alabama already has a pre-Roe ban on the books. Nothing would change while Roe remains intact, however.

Branham, the Alabama Reproductive Rights Advocates member, noted that the ballot measure doesn’t specify any exemptions to the criminalization of abortion, as similar measures in other states have. “Amendment 2 contains no provision for cases of rape, incest or the life of the mother,” Branham said. “We consider this amendment in its entirety an abomination against women and families.”

State Rep. Matt Fridy (R-Montevallo) sponsored the bill, and the Alliance for a Pro-Life Alabama coordinated a statewide campaign championing the measure.

Measure 106, if passed, would prohibit public funds from paying for abortions in Oregon except in cases of rape, incest, ectopic pregnancies, or a threat to the pregnant person’s health. As Governing.com reported, the ballot measure “would prevent state money from going toward abortion. In turn, it would end abortion benefits for public employees and women on Medicaid.”

“Measure 106 is a back-door ban on abortion. No matter who you are, you should have access to healthcare when you need it. That includes safe, legal abortion,” Brown said in a statement to Rewire.News. “That’s why I pushed hard to pass the Reproductive Health Equity Act last year, which ensures that every woman in Oregon has access to the full complement of reproductive healthcare. With Roe V. Wade hanging in the balance, it’s more important than ever that the states have leadership that will stand up for women’s rights.”

The initiative gained a spot on the ballot through a petition led by a local man, Jeff Jimerson, with funding from Oregon Life United PAC, which spent more than $444,000 on the 2018 election, according to financial reports.

But the amendment’s opponents, led by the No Cuts to Care PAC and Defend Oregon, spent $9.9 million opposing Measure 106 and other ballot measures, with financial support from Planned Parenthood. Recent polls show that an average of 53 percent of voters oppose Measure 106.

The No Constitutional Right to Abortion Amendment, also known as Amendment 1, aims to update West Virginia’s constitution to state that nothing in it “secures or protects a right to abortion or requires the funding of abortion.” Sponsored by state Sen. Patricia Rucker (R-Jefferson), the initiative was added to the ballot after the state legislature voted in favor of letting voters decide earlier this year.

West Virginia already has a pre-Roe ban on the books that would criminalize abortion and punish providers with jail time. So Amendment 1 is more about banning state Medicaid funds from paying for abortions, as Medicaid in the state currently covers abortions found to be medically necessary—a much broader guideline than the proposed initiative lays out. Amendment 1 does not include exceptions for rape, incest, fetal anomaly, or threats to the pregnant person’s life.

West Virginians for Life has championed the initiative and reported nearly $9,300 in cash contributions and $7,300 in cash expenditures in the 2018 election.

Though Amendment 1 proponents have said abortion would remain legal in West Virginia if it passes, the measure’s opponents disagree.

“Amendment 1 was put on the ballot by politicians who want to take away a woman’s state protected right to have a safe, affordable abortion,” Julie Warden, spokesperson for the local reproductive rights group WVFree, told Rewire.News. “If Amendment 1 passes, it paves the way for these politicians to pass other restrictive laws that could put the women in our lives in danger and leave their medical decisions in the hands of the government.”

A similar initiative passed in Tennessee in 2014, while one failed in Florida two years earlier, according to Roll Call.

“It is dangerous government overreach and simply goes too far,” Warden said.

CORRECTION: This article was updated to note that there are no exceptions included in the language in West Virginia’s amendment.