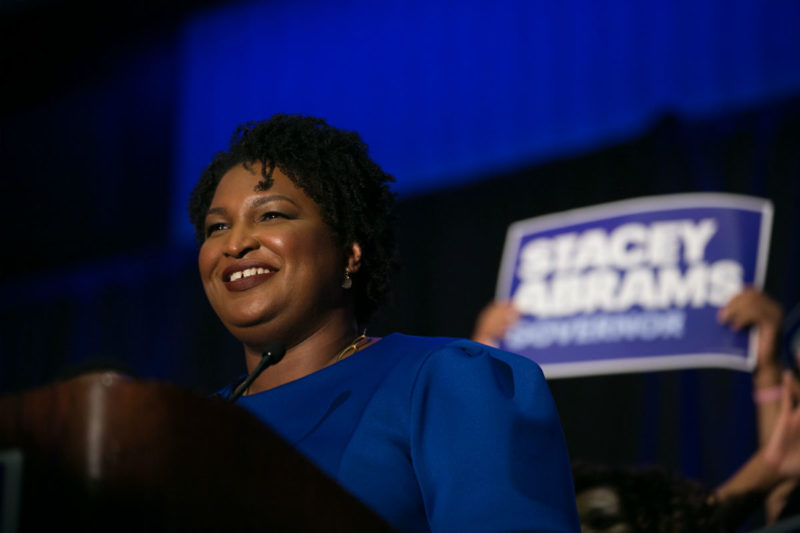 Should she win, Georgia Democrat Stacey Abrams will be the first Black woman governor in the country, Jessica McGowan/ Getty Images

The 2018 midterms have been a wild ride.

So it’s no surprise that we’re expecting more of the same when voters take to the polls next Tuesday. Here are seven of the races Rewire.News will keep a close eye on.

Georgia’s governor’s contest is one of the most closely watched in the country for a host of reasons ranging from voter suppression to the candidates themselves. Democrat Stacey Abrams has from the start waged a historic and unapologetically progressive campaign in what is considered a deeply red state. Should she win, Abrams will be the first Black woman governor in the United States, and she’s running on a platform that includes support for reproductive rights, criminal justice reforms, and safeguarding voting rights.

After winning an equally visible primary, Abrams faces Republican Secretary of State Brian Kemp in the general election. But many voting-rights advocates worry it isn’t a fair fight, as reports of voter suppression tactics continue to emerge from the state, some of which are tied to Kemp’s office.

Polls leading into election day show Abrams within striking distance of Kemp. Since the race will go to a December runoff if no candidate is able to top 50 percent, it may not be over after election day—but we will still be watching.

The race to replace term-limited Republican Gov. Rick Snyder in Michigan has made headlines from the start in a state whose highest office has received major blowback for its mishandling of the Flint water crisis. The Michigan Democratic primary saw several candidates take up reproductive rights as a key issue, including former state senate minority leader Gretchen Whitmer, who ultimately came out victorious, and progressive candidate Abdul El-Sayed.

It’s a theme Whitmer continued to build on throughout her campaign and during an interview with Rewire.News last November she vowed to have “the backbone of titanium to hold the line on further attacks eroding women’s health care” if elected. After Justice Brett Kavanaugh was nominated to the U.S. Supreme Court, Whitmer released a plan to protect abortion rights in the state by repealing a 1931 zombie law criminalizing abortion in Michigan and moving to protect access to the procedure.

Whitmer faces Republican Attorney General Bill Schuette, a stringent opponent of abortion rights unlikely to overturn that so-called zombie law—meaning the fate of access in the state could be at risk.

During the Democratic primary for Nebraska’s 2nd Congressional District, the Democratic Congressional Campaign Committee (DCCC) backed former U.S. Rep. Brad Ashford—who had served as a Republican state legislator and voted in favor of some abortion restrictions before switching his party affiliation—over progressive Kara Eastman. But Eastman pulled off an upset and secured her spot in next week’s general election when she took in just over 1,000 votes more than Ashford.

In an interview with Rewire.News before the primary, Eastman noted that she felt it was critical that a pro-choice advocate represent the district. “This is a time where we need somebody in this district who is going to stand up and fight for women,” she said. “And so that’s something I’m willing to do and would want to champion.”

Eastman was eventually endorsed by key national pro-choice organizations, including EMILY’s List, Planned Parenthood, NARAL Pro-Choice America, and the National Organization for Women PAC. And in August, the DCCC added her to its “Red to Blue” program, which “arms top-tier candidates with organizational and fundraising support to help them continue to run strong campaigns.” Polls heading into next Tuesday’s race show incumbent Rep. Don Bacon holding a lead over Eastman, but she could pull off another upset given the power of the progressive energy behind her.

New York’s 24th Congressional District was another example of the DCCC jumping into a primary, this time backing Juanita Perez Williams, a former prosecutor who made social media posts outlining her personal opposition to abortion rights which parroted anti-choice falsehoods, over progressive candidate Dana Balter. But when voters took to the polls in June to decide which Democrat would take on incumbent GOP Rep. John Katko, they overwhelmingly chose Balter.

Balter’s platform includes support for Medicare-for-All and protecting access to reproductive health care. Katko, in contrast, opposes abortion rights and has repeatedly voted to defund Planned Parenthood despite promising voters he would not do so. Katko leads in the polls.

With just days left before the midterms, Republican Rep. Steve King is making headlines for his support of a white nationalist. It’s nothing new for the eight-term member of Congress, who has steadfastly voiced his support for various white supremacists and neo-Nazis while members of the Republican Party have looked the other way. Democrat J.D. Scholten could put a stop to it if he wins next Tuesday.

As Rebecca Zweig reported this week for the Nation, “Scholten’s battle will be uphill. In the 2016 election, King beat his Democratic opponent by 22 points after fending off a comparatively moderate challenger in the Republican primary by a similar margin.” Still, Scholten “outraised the King campaign four-to-one in the latest fund-raising quarter, and the Democrat currently trails the incumbent by ten points, according to an Emerson College poll. Scholten’s internal polling puts him only six points behind.”

Scholten’s win could stop King’s extreme anti-choice agenda. King introduced the first federal “heartbeat bill” in January 2017, which would ban abortion as early as six weeks into a pregnancy, before many know they are pregnant. King was clear that the end goal of such legislation would be to mount a challenge to Roe v. Wade that could lead to it being overturned. In an interview with Rewire.News, Scholten said he “firmly believe[s] that people in D.C., especially Steve King and myself, should not be making these decisions [about abortion] for women across this country.”

Democrat Andrew Gillum’s massive upset victory in Florida’s gubernatorial primary positioned him as somebody to watch in one of the nation’s most closely contested races. The Tallahassee mayor defeated former U.S. Rep. Gwen Graham in the primary and is now up against Republican candidate and former U.S. Rep. Ron DeSantis. Gillum would be Florida’s first Black governor and the first Democrat to hold the seat since 1994.

Health care is a key issue in this race. Gillum’s platform includes Medicaid expansion, Medicare For All, and a promise to codify the Affordable Care Act’s birth control benefit. His platform has been welcomed in a state with one of the highest uninsured rates in the United States. As Rewire.News reported, this could be the key issue for capturing Latino voters who make up the majority of uninsured residents in the state. DeSantis, meanwhile, worked to repeal the Affordable Care Act and restrict reproductive health care access and funding while in Congress. His campaign platform includes a promise to “sign pro-life legislation into law.”

DeSantis has the support of President Trump and launched his campaign with an ad aligning himself with Trump’s agenda. His campaign has used racist attacks against Gillum, as Rewire.News reported. With the backing of groups like Democracy for America, the Progressive Change Campaign Committee, the Working Families Party, and Our Revolution, Gillum hopes to bring a progressive voice into the governor’s house. He is leading DeSantis in the polls.

Sen. Ted Cruz may be leading in many polls, but challenging Democratic Rep. Beto O’Rourke has waged a highly visible campaign with a sizable fundraising lead and the sustained support of grassroots progressive organizing.

Should O’Rourke win, he would unseat one of Congress’ most vocal anti-choice members. Cruz in his failed 2016 presidential bid promised to “do everything” he could to end legal abortion. As Rewire.News reported, Cruz “embraced noted extremists on the campaign trail like Operation Rescue’s Troy Newman and the Family Research Council’s Tony Perkins, whose organization is considered an anti-LGBTQ hate group by the Southern Poverty Law Center.”

O’Rourke is pro-choice and has co-sponsored legislation such as the EACH Woman Act, which would repeal the Hyde Amendment’s ban on using federal funding for abortion care.