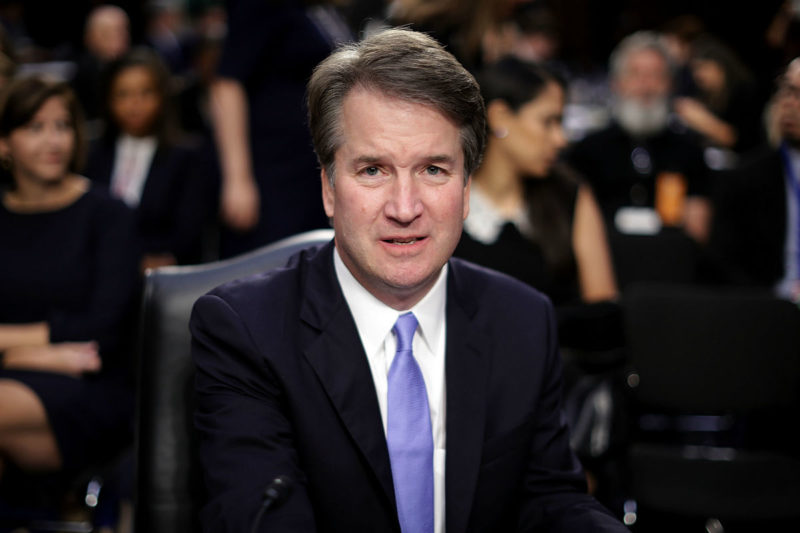 Judge Brett Kavanaugh's defenders say that when Kavanaugh used the term "abortion-inducing" in reference to contraception, he wasn't describing his own beliefs. Chip Somodevilla / Getty

During his confirmation hearings last week, Judge Brett Kavanaugh referred to contraception as “abortion-inducing drugs.” That incident has caused more consternation on the left and right than necessary—and both sides are overlooking a more serious issue altogether.

Sen. Ted Cruz (R-TX) asked about Kavanaugh’s dissent in a case called Priests for Life v. U.S. Department of Health and Human Services. In response to Cruz’s request that he describe the facts of the case—which involved a religious nonprofit that balked at having to fill out a form so that the Obama administration could work around the organization to provide its employees any desired contraception—Kavanaugh used the term “abortion-inducing drugs.”

“It was a technical matter of filling out a form, in that case with—that—they said filling out the form would make them complicit in the provision of the abortion-inducing drugs that they were—as a religious matter, objected to,” he said.

His invocation of the term “abortion-inducing drugs” immediately set off alarm bells among reproductive rights and justice supporters. Sen. Kamala Harris (D-CA) tweeted that Kavanaugh’s use of the term was a “dog whistle for going after birth control.”

But Kavanaugh’s defenders bristled. They say that when Kavanaugh used the term in reference to contraception, he was simply describing the plaintiff’s position in the Priests for Life case. He wasn’t describing his own beliefs.

For example, the Washington Post’s intrepid fact-checker, Glenn Kessler, decided to dive into Kavanaugh’s comments and concluded that he did not “signal he supports ‘going after birth control'”—at least not in his confirmation hearing comments.

Kavanaugh’s detractors countered that even if Kavanaugh’s use of the term didn’t mean that he believes certain kinds of hormonal birth control and IUDs are “abortion-inducing drugs,” the fact that Kavanaugh used the politicized phrase and adopted Priests for Life’s framing is problematic in and of itself. They point out that none of the contraceptives at issue are abortion-inducing, despite Priest for Life’s insistence that they are. He may not have been describing his own beliefs, but his use of the term tips his hand as to which side he’s on.

I haven’t been shy about my concerns about Kavanaugh’s record and what it would mean for reproductive rights. His order in Garza v. Hargan to deny an undocumented minor in U.S. custody the right to an abortion is a harbinger of bad things to come in multiple regards. I also think he will be a disaster on civil rights for people of color, LGBTQ folks, women, people with disabilities, workers, and basically anyone that isn’t a rich cishet white dude, while being a boon for corporate interests.

I’m no Kavanaugh enthusiast, is what I’m saying. Even so, I see both sides in this argument. Sure, Kavanaugh said “they said,” and so he was relaying Priests for Life’s position. But he certainly left no daylight between the plaintiff’s entirely incorrect view that contraceptives are abortion-inducing and the scientific fact that contraceptives are not. Also, I know that Kavanaugh is capable of expressing himself more articulately, because he did so in his Priests for Life dissent: “They complain that submitting the required form contravenes their religious beliefs because doing so, in their view, makes them complicit in providing coverage for contraceptives, including some that they believe operate as abortifacients.”

That’s what he should have said at the hearing, for clarity’s sake. And I’m not really buying the “he was stumbling over his remarks” excuse that Kessler seems to accept.

But it doesn’t really matter. I think both sides are overlooking the important part: the fact that Kavanaugh’s opinion in Priests for Life is utterly bonkers and suggests a willingness to allow evangelicals, by claiming a sincerely held religious belief, to be exempted from laws intended to provide people with contraceptive access through their employers, even when following those laws would require said employers to do nothing more than sign a piece of paper. Essentially, these evangelicals want to veto their employees’ right to gain access to contraception, much less use it.

And even more frightening, Kavanaugh is willing to deploy truly twisted logic to appease the religious organizations who want to keep their fingers out of the contraception pie.

So ultimately, a 30-second clip from his confirmation hearings that has been unmoored from its context is not the issue. The issue is Kavanaugh’s bizarre dissent in Priests for Life, which is why he was talking about birth control in the first place.

Before I dive into that, let me explain what the Priests for Life case was all about. This will require a brief foray into what the birth control benefit is and how its religious accommodation operates, so bear with me.

The Affordable Care Act (ACA) requires most private health insurance plans to provide coverage for a wide range of preventive services. This includes prescription contraceptives approved by the FDA.

Almost immediately after the ACA’s passage, religious organizations opposed being required to provide contraceptive coverage. It’s a violation of their religious freedom under the Religious Freedom Restoration Act (RFRA), they said. Some of them even said that they believed that certain contraceptives—hormonal birth control, IUDs, and emergency contraceptives like Plan B and Ella—are abortifacients, or abortion-inducing drugs. (They aren’t.)

The compromise was simple: Churches and other houses of worship could exclude contraceptive coverage from their health insurance plans.

Other religiously affiliated nonprofit organizations would be able to opt out of the birth control benefit by filling out a form called Form 700 and passing it along their insurer (or third-party administrator, if they were self-insured). Form 700 would let an organization’s insurer know that it opposes contraception on religious grounds and refuses to provide coverage for it. The insurer (or third-party administrator) would then step in and provide contraceptive coverage in the objector’s stead. (The Trump administration, incidentally, has attempted to blow up the birth control benefit by issuing an executive order that would permit any employer to claim a religious or moral exemption; that order is currently blocked.)

Priests for Life was one of the many cases challenging the Obama administration’s compromise as a violation of RFRA. Priests for Life, an anti-choice group, argued that if it filled out the form, it would be “triggering” a governmental process by which a third party would provide their employees contraceptive coverage. The group said it would be as morally complicit as if it had provided contraceptive coverage directly.

In November 2014, a panel of the D.C. Circuit Court ruled against Priests for Life, with Judge Nina Pillard writing the decision. Priests for Life sought a rehearing en banc, meaning in front of the full bench. The court refused. In that decision, Kavanaugh sided with Priests for Life. In his dissent, he quibbled with the requirement that religious employers like Priests for Life identify their insurer: “[T]he currently required form requires a religious organization both to raise its hand and point to its insurer.”

As Pillard noted in seeming frustration in her opinion rejecting the en banc hearing, “Only once an insurer becomes aware of the employer’s religious objection can it take the steps needed to effectuate the opt out.”

That makes sense. Kavanaugh’s reasoning does not.

In Kavanaugh’s estimation, it’s OK to require that Priests for Life identify itself as a religious objector by asking to opt out of contraceptive coverage. It’s not OK, however, to require it to disclose the identity of its insurer, because doing so would kick off the ACA regulations requiring that insurer (or third-party administrator) to step in and fill the birth control coverage gap.

Kavanaugh thinks there are other ways the government could go about furthering its compelling interest in facilitating access to contraception for employees who work at religious institutions. “As the Court in Hobby Lobby noted, the Government could directly subsidize or provide contraceptives to employees of religious non-profit organizations,” Kavanaugh wrote.

This is important. Kavanaugh is essentially saying: Sure, the Court sort of suggested that facilitating contraceptive access is a compelling interest, but is it really? Kavanaugh is just asking the tough questions, folks. And if some enterprising lawyers tee up a case that will allow the Supreme Court to determine once and for all whether facilitating access to contraception is a compelling government interest, and if Kavanaugh just so happens to be an associate justice when that case reaches the high Court, well then, he might just be amenable to deciding that the answer is no: There is no compelling government interest in facilitating access to contraception. And wouldn’t you know, the Trump administration is actually arguing that facilitating access to contraception is not a compelling interest—it’s only a reasonable interest. Thus, as Christine Grimaldi and Jessica Mason Pieklo put it for Rewire.News, the administration is “trying to ingrain an anti-contraception bias into the law as conservatives continue their relentless attacks on reproductive health-care access on all levels of government.”

Kavanaugh’s dissent in Priests for Life is illogical. It only makes sense if you believe that certain organizations should be exempt from the law simply on their own say-so. Perhaps that’s why, as the National Women’s Law Center noted in its fact sheet about Kavanaugh, his dissent goes against seven other circuit courts of appeals—in addition to Kavanaugh’s own court. Kavanaugh would permit a religious employer to eschew filling out a form because it infringes on that employer’s religious freedom and violates RFRA.

Nina Pillard is not about that life. As she wrote, Priests for Life “have been subjected only to a de minimis burden of completing a form, and their RFRA claim fails.”

“De minimis” is Latin for: It’s not a big deal, just sign the fucking form.

So Kavanaugh’s specific words in response to Ted Cruz’s question may not have signaled that he’s “going after birth control.” But his bizarre dissent in Priest for Life signals that he’s certainly onboard with whatever cockamamie reason a religious organization can concoct to block its employees from accessing contraception coverage mandated by the ACA.