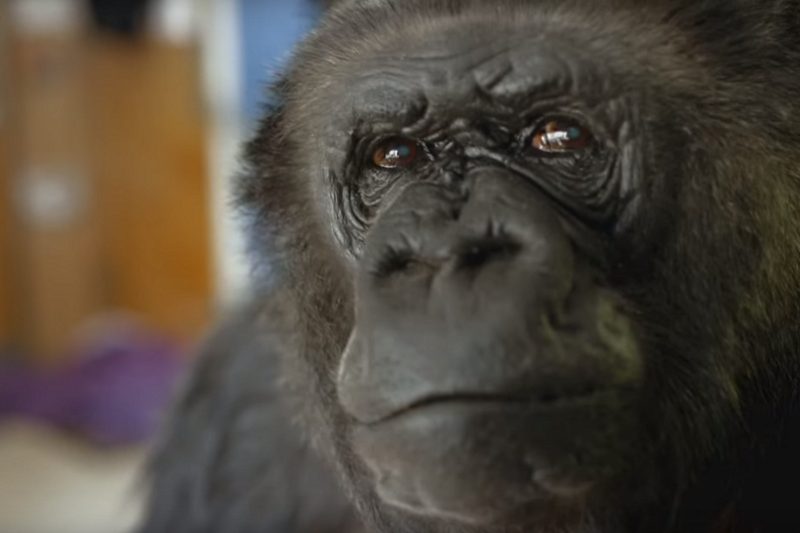 Communing with Koko is a type of theophany with her radical Otherness as divinity manifested in the form of a beast. PBS / YouTube

You show me the honor of calling upon me to submit a report to the Academy concerning my previous life as an ape.

When I was around 8 or 9, I wrote a fan letter to Koko the gorilla.

A few months after sending off my letter, typed in size 16 comic sans font, I received a missive from the Gorilla Foundation of Woodside, California. I saved it for years, alongside another response in regard to a letter sent that same summer to Bill Clinton over my concern that congress had cut funding to the Superconducting Collider particle accelerator (because I was that kind of kid). Lost now for decades, I still remember Koko’s response, purportedly “transcribed” by Koko’s keeper Francine “Penny” Patterson, affixed with both the biologist’s signature and a massive gorilla thumbprint.

A sort of magic for me. Which was why the news of her passing has engendered a strange type of mourning for someone I never met, a creature not even human. I was obsessed with Koko, the ASL communicating gorilla fluent in close to 2,000 signs who had transfixed Americans since the 1970s with her appearances in videos with celebrities from Robin Williams to Fred Rogers, poignantly mourning her kitten All Ball, and periodically appearing alongside her indefatigable parent, teacher, and defender Patterson. Critics of the experiment accused Koko of being more stunt than science, claiming that the project produced unrepeatable and unverifiable results, and seeing in Koko echoes of trained beasts like Clever Hans, the early 20th century German horse who could supposedly stomp out answers to simple arithmetic questions.

None of the criticisms—some of which seem, even to a non-scientist such as myself, to have merit—really dulls that initial magic for me. Even a quarter-of-a-century later, stories about Koko signing “Where are the goodies?” on Valentine’s Day, or of her watching nature documentaries of other apes in rapt fascination provide me with a delight unavailable in more sober, skeptical, rational discourses. Few things have been able to engage me in that way since the days of my letter to Koko. Mine was a youth spent visiting the Pittsburgh Zoo and watching the dignified gorillas, the exasperated orangutans, the rebellious gibbons. I was a consumer of all things simian: Sigourney Weaver as Dian Fossey in Gorillas in the Mist, multiple viewings of all five of the original Planet of the Apes films (even the one where the brain-engorged people pray to a nuclear bomb in the ruins of St. Patrick’s Cathedral), and that still immaculate moment not long after hearing back from Koko when I actually got to meet Jane Goodall at the Carnegie Music Hall in Pittsburgh.

Gorillas, chimpanzees, orangutans, monkeys—they circumnavigate my normal critical faculties, my academic inclination to intellectualize any passion. If a hypothesis can be proffered for my passion it’s in simian uncanniness, the intuition that being, at once, so much like us and so foreign, they offer a glance into some kind of primal otherness, some prelapsarian intimation of what it means to be human. That’s as close as I can personally verbalize it. I suspect similar motivations define the rather common fascination so many of us have in these animals. As scholar Donna J. Haraway, one of the founders of the field of animal studies, wrote in Primate Visions: Gender, Race, and Nature in the World of Modern Science, “Monkeys and apes have a privileged relation to nature and culture for western people: simians occupy the border zones…”

Deities or ‘vilest of beasts’

Long before scientists actually broached the communication divide between humans and other primates, women and men dreamed of talking apes, creatures able to confirm our suspicions about our common connections. Before Koko could sign, there was the monkey princess Babiole in Madame d’Aulnoy’s 17th century fairytale of the same name; before Washoe the chimp taught her baby the sign language that had been taught to her, there was the ape-mother Kala raising her human baby in Edgar Rice Burroughs’s Tarzan; before the adorably named Nim Chimpsky, wearing overalls and doing the dishes at Columbia University, there was Sun Wukong, the “Monkey King” of Wu Cheng’en’s 16th century Chinese classic Journey to the West.

Such fictional creatures, as well as those apes that supposedly can speak to us, resemble those children kept in isolation in early modern experiments in an attempt to ascertain that Edenic language. Both sets of beings have something to say about speech so primal that it sings in a universal dialect; for though monkeys cannot speak, we’ve been able to hear them in dreams since that Egyptian baboon-god Thoth invented language.

In the ancient Hindu epic The Ramayana the central character Rama is assisted in his efforts to rescue his wife from a demon king by the monkey-god Hanuman, whose name coincidentally but appropriately evokes the English word “human.” Despite being unmistakably simian in appearance, Hanuman is a deity who “stood up and told his story” and “spoke encouraging words.” Anthropologists rarely refer to language as being that which separates humans from animals anymore, but in either case Hanuman erased that distinction in mythology centuries ago, and he’s certainly not the only example.

Scholar Wendy Doniger explains that Hanuman’s aid to Rama functions as a “paradigm for human devotion to a god.” If the Ramayana depict apes and monkeys as models of reverence and piety, then other traditions and texts took the opportunity to use our simian cousins as representative of humanity’s baser actions. French medieval philosopher and poet Bernardus Silvestris wrote in the 12th century that the “ape becomes the image of man, but a deformed image representing man in a state of degeneracy.”

Monkeys, of which the vast majority of medieval Europeans would have never seen real examples, became stock characters to symbolize human fallenness, repeated across sculpture, illustrated in lurid color throughout bestiaries, and populating poetry and homily. For reference, consult the thousands of manuscripts depicting cheeky, playful, and rebellious monkeys, reflecting the classical author Quintus Ennius’ letter to Cicero describing “apes, vilest of beasts, how like to us.”

Whether as deities or demons, the similarity of apes to humans is what has so often motivated depictions of speaking monkeys, for we wish to bridge that divide. Even before Darwin’s theory of evolution through natural selection, we intuited the obvious truth that they reflect something of our own origins. Inherit the Wind‘s creationist protesters may hold signs reading “I’m not descended from a monkey,” but the reality is that apes permeate our myths, religion, and literature precisely because it’s so obvious that we’re related. Darwin may have provided the mechanism for how such a transformation occurred, but our own eyes tell us that there’s something eerily human in the stride of a chimp, the grooming of a gorilla, the irritability of an orangutan. The figure of the woodwose, the Wildman, and greenman is replete throughout folklore for much the same reason.

Where do animals go when they die?

Specialists in animal studies, writing at the nexus of science and the humanities, have persistently and convincingly warned about the dangers of anthropomorphizing. In Jacques Derrida’s, The Animal That Therefore I Am, a foundational text in animal studies, he writes against “anthropomorphic projection of something that remains the preserve of man, as the single assurance, finally, and the single risk of what is ‘proper to man.’” Good to remember, in other words, that the chimp with a stick isn’t a nascent militarist, nor the frotting bonobo a primal libertine, but that each is rather precisely what they appear to be—a chimp and a bonobo. Worthwhile to remember, lest we fall prey to the crudest affirmations of social structures as if they were simply part of the natural world. Therein lies the madness of pretending that lobster serotonin has anything useful to say about gender justice, as Jordan Peterson has alleged.

Other animal studies scholars have tried to reaffirm what’s helpful about a certain kinship with animals, perhaps recalling theologian Martin Buber’s “I and Thou relationship” when staring into the eyes of a chimp or reading the hand movements of a gorilla. Cultural historian Paul Waldau has written about “nuancing anthropomorphism,” unless we accidently veer into that equally fallacious and arguably more dangerous Cartesian myth which posits animals as simply being-machines wrought exquisitely.

Koko, whether she was able to speak as a human or not, was certainly not a machine. Neither was Washoe, or Nim Chimpsky, or any of the other marvelous talking apes. Leave it to the primatologists, psychologists, and linguists to parse the accuracy of whether these beasts could communicate as we’ve defined it or not. The nuanced warning from those who do animal studies, that we must avoid anthropomorphizing in the wrong way while taking care to respect the agency of these creatures, is important. Part of me is so enraptured by stories about gorillas and chimps communicating beyond the division of species because of that old hobby-horse which holds that such interactions affirm something about shared humanity.

But as I get older, and hopefully a bit more sophisticated, I think what’s truly transformative about such interactions is not animals’ shared commonality with us, but rather their profound difference. The Victorian Catholic cultural critic John Cardinal Newman asked “Can anything be more marvelous or startling…than that we should have a race of beings about us whom we do but see, and as little know their state, or can describe their interests, or their destiny?”

He elaborates that animals have “passions, habits, and a certain accountableness, but all is mystery about them.” Whether hyperbole or not, there is a deep mystery about what happens within the minds of our earthly brethren; as in the original, theological meaning of the term referring to the sacred, mysterium. As such, those interactions with our fellow great apes are as a rite with something to tell us about those strange things we call consciousness, interiority, intelligence, the mind.

Looking into the fathomless depths of Koko’s black eyes leaves little doubt that she was a being far more complicated than what we’re able to guess or invent. In conversations with her we broached, not just that natural unknown we confront with other animals, but the infinite mystery of other minds, of all of our fathomless intelligences being so very foreign—yet capable of some sort of connection.

Difference—what it has to say about consciousness, interiority, intelligence and their radical multiplicity—is an example of the religious concept of mystery. Communing with Koko is a type of theophany: her radical Otherness divinity manifested in the form of a beast. When apprehending such mysteries it’s intellectually best to adopt the humility exhibited by Koko herself, who, when asked where animals go when they die, responded, “a comfortable hole,” then gave her trainer a kiss goodbye.