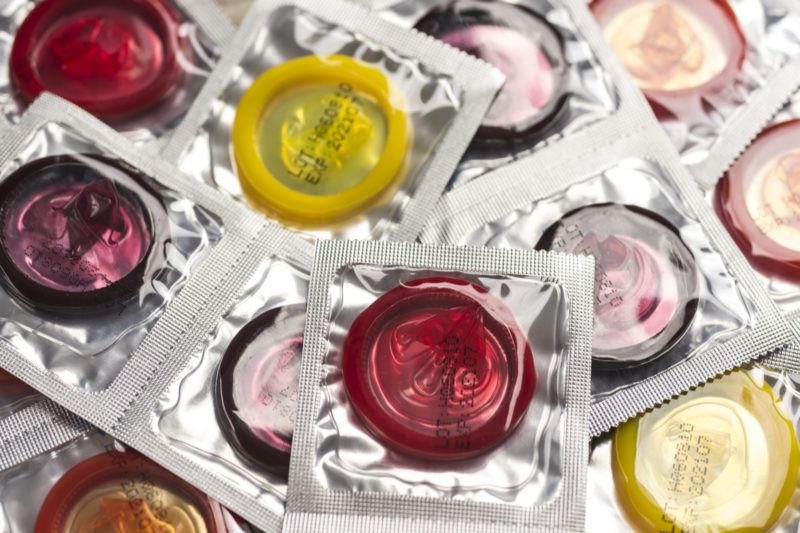 Having free condom dispensers in campus bathrooms would normalize condom use and safer sex. Shutterstock

When Boston College student Connor Kratz came out as a freshman, he realized he didn’t have any tools available on campus to learn more about sexual health and staying safe.

“I didn’t have the resources to have those discussions on my campus,” he explained. He then joined Students for Sexual Health, a group that had previously received pushback for handing out contraceptives on the Catholic campus.

That experience “helped me realize this is what I wanted to share with other people, these resources. Everyone deserves and has a right to sexual and reproductive health care.”

Kratz is one of 1,000 college students participating in the Great American Condom Campaign (GACC), an Advocates for Youth project providing each student with a box of 500 condoms to hand out in their community during a semester. The GACC has existed for several years—but now many students are advocating for their schools to be the ones handing out condoms instead.

Because young people are a population with relatively high sexually transmitted infection (STI) rates, and contraceptives are a right like any other form of health care, these students are pushing their campuses to put up free condom dispensers as part of the campaign.

Young people have the right to lead healthy lives and make their own choices about their futures. There are proven links between a person’s ability to decide if and when to become pregnant and their academic achievement and rates of attending and completing college.

Of the estimated 20 million new STIs infections reported in the United States each year, people between the ages of 15 and 24 make up more than 50 percent of new gonorrhea cases and more than 60 percent of new chlamydia cases. When Kratz and his group surveyed nearly 400 Boston College students about condom use, they found 80 percent of students on campus were sexually active, yet 60 percent of those surveyed did not always use protection during sex. Demonstrating how useful it would be if the school provided condoms, more than 70 percent of respondents said they would use resources if they were provided by a student group or the university. Almost 45 percent didn’t know where to find sexual health resources and treatment near campus.

A majority of colleges do make condoms available. But where condoms are available, they’re often not used as much as expected, given the sexual health needs of college students, said Scott Butler, assistant director of the School of Health and Human Performance at Georgia College.

Butler is one of a few academics who has done studies about condom availability in colleges, and according to his research, 85 percent of colleges in the United States distribute free condoms somewhere on campus. Butler said that “most colleges that give out condoms—about 96 percent—do so at their college health center.” But one reason this isn’t effective is because “people associate going to the health center with when they are sick or ill. You need to make condoms available in different places within the student’s environment, so they have them when they need them.”

As Butler explained, “colleges only give out an average of 1 condom per student per year. It’s clear that that’s not enough to meet the sexual health-care needs of students.” But Butler is not sure that colleges have “realized that the number they were giving out was low in comparison to the student population.”

This makes sense to me: I manage the Great American Condom Campaign, and thousands of students apply to hand out 500 condoms themselves in their free time without any compensation or additional incentives, aside from knowing that people on their campus really need these sexual health resources and a desire to help people have the reproductive care they deserve.

Stephon Camp, a junior at Indiana University Southeast and a leader in an LGBTQ group on campus, is collecting petition signatures for his school to put free condom dispensers in public places. “Not everybody always knows where these resources they can get are, and some people are still going through embarrassment to even go to the store and buy them, or think it’s not important until something happens,” he said. “We’re trying to get a condom dispenser … and figure out if we can possibly have them in bathrooms.”

While distributing condoms with the GACC, Camp has noticed a high demand while giving out condoms at his school. “Outside our club office, people can grab condoms, and that’s been going really well since I’ve had to fill that up numerous times,” said Camp.

Camp noticed a lot of shame around needing condoms while handing them out at Indiana University Southeast. “With the free condom dispenser that we are working on, I know that would help with the privacy part because people do get really hesitant, especially with it being a small campus. We’ve got paper bags if people want privacy,” said Camp, as he’s overheard groups of students making snarky comments about others who are grabbing condoms.

Some of the stigma around condom distribution also concerns ideas about youth and sexual activity. Opponents of condom distribution often claim that giving people free condoms will make them have more sex than they already do. On the other side, the American Academy of Pediatrics has stated that condoms should be made widely available in schools and to teens. There is no evidence that increased access to condoms or contraceptives increases young people’s sexual risk taking.

Having free condom dispensers in campus bathrooms would also normalize condom use and safer sex, as well as reduce the stigma around the need for condoms.

Only about 13 percent of colleges have condom dispensers or vending machines, added Butler.

Free condom dispensers have been a success at American University in Washington, D.C., where they were installed last year. Those machines cost $75 to $100 each (condoms are provided free from the local health department)—definitely a worthy and inexpensive investment in young people’s health and safety.

Mickey Irizarry, the director of the Wellness Center at American University, realized that the 9-to-5 hours of her office, which provided condoms, were a barrier for students. “We had heard, especially from students that live on campus, that they were frustrated that they couldn’t get condoms in their residence halls.”

With help from students, she began exploring location options. They wanted “somewhere that was easily accessible, and public space in the halls, but that wasn’t so in your face, in case some students who aren’t sexually active were not going to be comfortable with it, but also not so private that it would be hard to get to or that they wouldn’t know where it is.” They ultimately ended up placing them in three residence halls, where they “were having to fill up the dispensers about every week or two.” The campus plans to put up more free dispensers in residence halls.

Although the movement for free condoms is a new and growing one—and faces uphill battles on some religious campuses—some students have succeeded in getting their schools to give out free condoms. Jasmine Wilson, who’s a part of Advocates For Youth’s Student Organizing team, advocated for her school, Kenyon College in Ohio, to provide free internal condoms (sometimes called female condoms) last semester.

“I began organizing for free condoms on my college campus because I believe that people should not be restricted [from] living a safe and healthy life. Condoms are a form of protection and safety,” said Wilson.

She added another reason: economic equity. Cost is a major barrier to condom access for some young people.

Free condom distribution “would eliminate the large income gap, where affluent students can afford better health care and therefore afford things like contraception …. I know all too many people who do not use condoms because they could not afford to purchase them, and that should not be the case. Condoms should be available for free to everyone.”