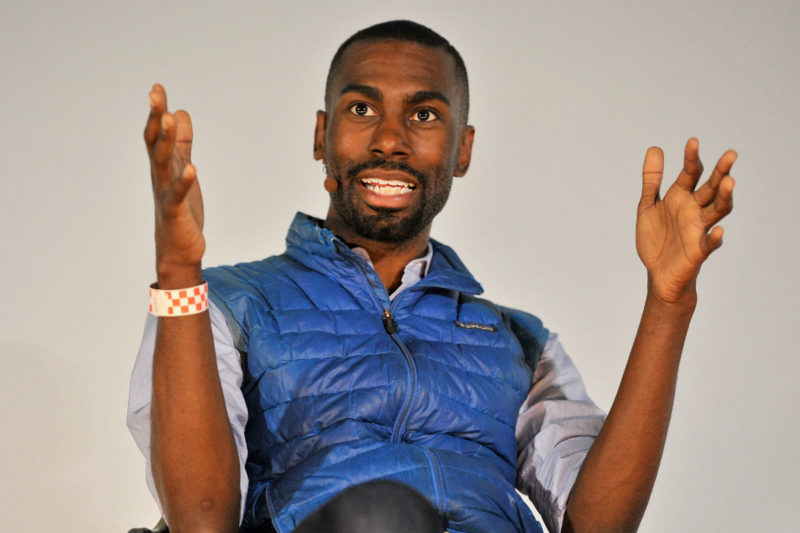 Those were some of DeRay Mckesson’s final words to Jeanine Pirro in a dust-up on Twitter before he filed a defamation lawsuit against her and Fox News.

The Twitter kerfuffle popped off after TV judge and host Jeanine Pirro’s September 29 appearance on Fox & Friends. During the show, she made some statements that Mckesson claims were untrue and defamatory. He also says they endangered his safety.

A little background is in order: Back in late September, a federal judge practically laughed as he tossed out a lawsuit that named a hashtag as a defendant. A Baton Rouge, Louisiana, police officer who—after being severely injured during the protests that took place in the city after Alton Sterling’s death—filed a lawsuit against Black Lives Matter (the social movement) and #BlackLivesMatter the hashtag.

The cop—who sued anonymously—also named activist DeRay Mckesson in his failed lawsuit. According to the cop’s suit, Mckesson was, essentially, the ringleader of a gaggle of Black people whose only mission was to destroy Baton Rouge and bash the police in the face with rocks.

The officer claimed Mckesson directed the violence that erupted during protests and that he controlled the participants, thus making Mckesson liable for the cop’s injury.

After U.S. District Court Judge Brian Jackson tossed the lawsuit out of court (for reasons I explain here), Jeanine Pirro, who is noteworthy for her involvement in the Robert Durst case documented in the HBO series The Jinx and hosting the garbage television show Justice with Judge Jeanine on Fox News, appeared on Fox & Friends and parroted the police officer’s claims.

The segment started by showing video of a protest totally unrelated to the protest in Baton Rouge—a 2015 St. Paul protest during which a group of people can be heard chanting “Pigs in a blanket; fry ’em like bacon,” Just to hammer home the false narrative that Black Lives Matter promotes violence against police, Fox & Friends host Steve Doocy introduced Jeanine Pirro, who laid the violence at the Baton Rouge rally directly at Mckesson’s feet.

Pirro begins by questioning whether Jackson’s decision that neither #BlackLivesMatter the hashtag nor the movement can be sued was correct. (It was; you can’t sue a hashtag or a social movement, and Pirro damn well knows this.) She goes on to say, “In this particular case, DeRay Mckesson, the organizer, actually was directing people, was directing the violence.”

“You’ve got a police officer who was injured, he was injured at the direction of DeRay Mckesson, DeRay Mckesson walks away with a hundred thousand dollars, for an organization that is amorphous. We got a problem in this country,” Pirro asserted.

The “hundred thousand dollars” refers to a settlement figure in a lawsuit brought by Mckesson and dozens of activists arguing that the Baton Rouge police had used excessive force when arresting them in connection with the Sterling protest. As the Baltimore Sun reported, the settlement entitled Mckesson, along with 68 other activists, to anywhere from $500 to $1,000.

Mckesson’s lawsuit claims that Pirro’s statements were false, that she made them with reckless disregard for whether they were true, and that she “made these false statements of fact on the highest viewed morning cable show in the country, Fox & Friends, which reaches over 1.7 million viewers.”

His complaint did not mention one notable part of the segment, probably because it’s an ear-piercing dog whistle: Pirro made a big to-do about the fact that former President Barack Obama appointed Judge Jackson to the federal bench. A photo of the judge—who is Black—flashed on the screen.

The implication was, of course, that the Black judge appointed by the Black president is obviously going to side with the Black defendant. It couldn’t possibly be that Judge Jackson was following the law and vindicating Mckesson’s rights of free speech and free association.

But these tactics and insinuations are often the tools of the trade at Fox News. As Erik Wemple wrote for the Washington Post a day after the show:

Here was a remarkably efficient instance of the sort of race-baiting that’s all too common on Fox News’s opinion shows. In less than two minutes, Pirro and her hosts at Fox & Friends—who, of course, couldn’t muster an opposing thought—managed to allege that Mckesson, a black man, “directed” violence against a police officer, with the support of a judge, also a black man, whom Pirro singled out during her segment. Who was nominated by a certain black president. All on a program that, in other contexts, loves to chat about the imperative of uniting the country.

In the aftermath of Pirro’s bizarre appearance on the show, Mckesson took to Twitter to demand that Pirro “stop lying.”

“I was found not guilty & I didn’t direct any violence. In fact, I was protesting the violence of the police. Stop lying,” tweeted Mckesson.

Actually, the court order doesn’t find Mckesson “not guilty”—since a not guilty verdict follows a criminal trial and Mckesson wasn’t charged with any crime. Still, he has a point.

Judge Jackson may not have found Mckesson “not guilty,” but he certainly made it clear that Mckesson’s activities at the protest were protected free speech, and that holding him liable for the violence of people he did not lead would penalize him for exercising another First Amendment right: his right to free association.

Jackson further made it clear that in order to hold Mckesson liable for his injuries, the police officer would have to prove that Mckesson “authorized, directed, or ratified” the violence.

The cop provided no such proof. And in defense of her statements, Pirro said, “Based on 32 years in law enforcement, you can only be found not guilty after a trial. Mckesson was not tried. I was quoting paragraph 17 and 19 from court documents,” according to Erik Wemple.

The first part, about when you can be found not guilty, is true. The second part, according to the lawsuit, is not. The document Pirro is likely referring to is the officer’s original complaint. It does allege that Mckesson incited violence. The problem is, Pirro presented those allegations as fact.

And if she did so with malice—which is what Mckesson will have to prove as part of his defamation case, because he is a public figure and the law has a tougher standard of proof when it comes to public figures—then Pirro will likely have to fork over some cash to Mckesson, either in a settlement or at the conclusion of a trial.

In response to the lawsuit, Fox News is standing by their woman: “We informed Mr. Mckesson’s counsel that our commentary was fully protected under the First Amendment and the privilege for reports of judicial proceedings,” a spokeswoman for the network said in a statement, according to a Baltimore Sun report.

Well, we’ll just have to see about that.