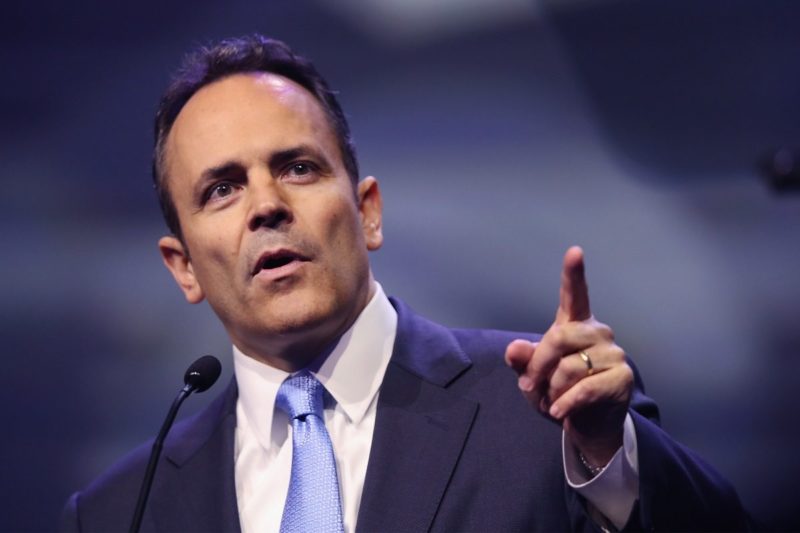 Gov. Matt Bevin (R) said he filed suit against the federal government on the matter for “dictating which doctors would or would not—or in this instance all would—be required to perform sex-change operations under fear of losing their license.” Scott Olson/Getty Images

Kentucky Gov. Matt Bevin (R) touted his opposition to legal protections for transgender people during a panel at the Conservative Political Action Conference (CPAC) on Thursday.

“When you think about ‘What is the one area where we have felt the most encroachment (on states)?’ It’s hard to think of a single one,” Bevin said. “The lawsuits that I’ve had to engage in on behalf of the Commonwealth of Kentucky against the federal government, pushing back against the federal government dictating who goes into our locker rooms and bathrooms in public schools is number one.”

Kentucky in May joined 11 other states in a lawsuit against the Obama administration’s guidance on allowing transgender students to use the bathroom that aligns with their gender identity. Bevin has called protections for transgender people “silly.”

The Kentucky governor’s snipe amounted to a potentially dangerous signal a day after the Trump administration undermined protections for transgender students. Secretary of Education Betsy DeVos, who led the U.S. Department of Education in revoking the protections, called them a “very huge example” of the Obama administration’s overreach in separate remarks at CPAC, even though she has painted herself as an LGBTQ ally.

Bevin also defended the right of health-care providers to discriminate by refusing to treat transgender patients.

The second of what Bevin referred to as “encroachments” by the federal government was a regulation issued by the Obama administration extending health-care equity to transgender people. As Rewire reported, the move “implements Section 1557 of the Affordable Care Act, also known as Obamacare, which prohibits sex discrimination based on pregnancy, gender identity, and sex stereotyping in federally funded health-care programs. HHS had already extended civil rights protections for race, color, national origin, disability, and age.”

Bevin said he filed suit against the federal government on the matter for “dictating which doctors would or would not—or in this instance all would—be required to perform sex-change operations under fear of losing their license.”

In reality, the rule made illegal “the practice of categorically excluding all gender transition-related health care from coverage, common in private health insurance plans, as well as in state Medicaid, Indian Health Service, and CHIP (Children’s Health Insurance Program) programs,” according to the National Center for Transgender Equality. “Instead, plans will have to cover services for transgender people if they offer those services to non-transgender people or if denying the service is based on a discriminatory reason instead of a valid reason, such as a scientifically supported reason.”

A judge blocked the Obama administration rule in January.

Bevin’s comments were aligned with so-called conscience-refusal laws, a form of religious imposition permitting civil servants, health-care workers, and others to deny services or products based on a moral or religious objection to a person or the product requested. Discriminatory religious imposition laws are sweeping through GOP-controlled state legislatures.

Both Bevin and Brownback touted their anti-choice views during the panel. Brownback called for the repeal of Roe v. Wade and for the issue of abortion to be “driven to the state level” for them to deal with instead of the federal government. “Let it be handled by the states,” he said. “That is what will happen when Roe is repealed.” [16:46]

“This would be much better handled on a state-by-state basis. Then people can look and adjust the policies as they see fit,” he added.

Rewire’s Jessica Mason Pieklo reported in January that “there are four states that have so-called trigger laws on the books that, should Roe be overturned, would immediately re-criminalize abortion: Louisiana, Mississippi, South Dakota, and North Dakota.”

“Those four states are hardly the only ones where abortion rights would be immediately under threat should Roe fall,” Mason Pieklo wrote. “Currently 13 states have unconstitutional and unenforceable near-total criminal bans on abortion on the books. These zombie statutes are laws that outlawed or nearly outlawed abortion pre-Roe, which lawmakers either intentionally left in place or never got around to repealing.”

Brownback has led an anti-choice crusade in Kansas, where the economy is collapsing after years of the governor’s failed austerity measures. Brownback has pushed to end funding for Planned Parenthood and implement other policies restricting access to reproductive health care. He signed an omnibus anti-choice law in 2013 that eliminated tax credits for abortion providers and wrote “personhood” language into the state’s constitution that could grant legal rights to fertilized eggs, zygotes, embryos, and fetuses as “persons”—consequently criminalizing abortion and many forms of contraception.