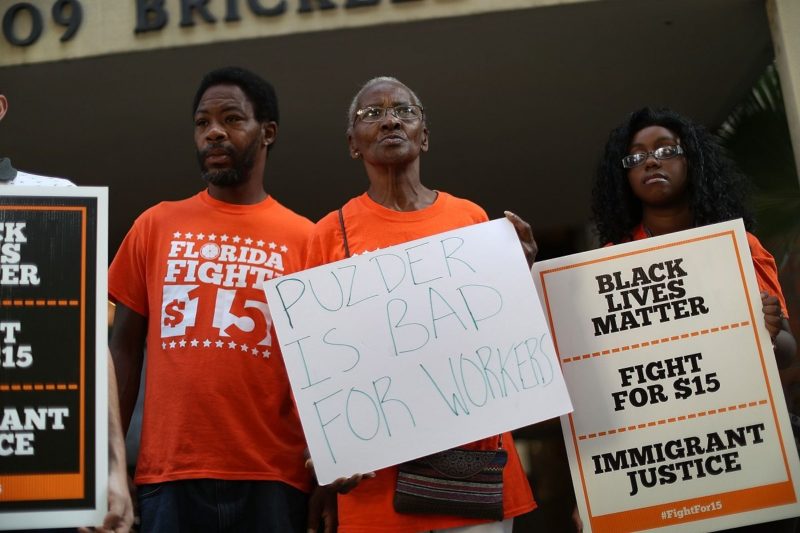 Workers described how the constant pressure to cut labor costs left stores understaffed, doubling the workload on any given shift. Workers alleged that supervisors made them work off the clock when labor costs exceeded sales at a store. Joe Raedle/Getty Images

Confirmation hearings for the president’s controversial pick for labor secretary have been delayed a fourth time amid fresh allegations of workplace violations at restaurants in Andrew Puzder’s fast-food empire.

An aide to Sen. Lamar Alexander (R-TN), who chairs the committee holding the Labor Department nominee’s confirmation hearing, told the Washington Post the committee won’t set a hearing date until Puzder, CEO of a restaurant group that includes Carl’s Jr. and Hardee’s, hands over all of the required financial disclosures.

Puzder has yet to submit financial disclosures to the Office of Government Ethics, according to the Post. Hearings on Puzder’s confirmation had been set for January 12, January 17, February 2, and February 7.

The 16-page report alleges Carl’s Jr. and Hardee’s employees were denied breaks, exposed to unsafe work conditions and harassment, and forced to work off the clock or prepare food while they were ill.

Blanca, a 59-year-old fast-food worker with diabetes, claims Carl’s Jr. terminated her for being ill. When low blood sugar caused her to collapse, forcing her to take time off of work, she claims her manager retaliated by suspending her for four days and then firing her.

Ashlee, a shift manager at Hardee’s, claimed, “I can recall multiple instances when the cooks in the back would be puking off into the garbage can and then finish up an order.”

Workers described how the constant pressure to cut labor costs left stores understaffed, doubling the workload on any given shift. Workers alleged that supervisors made them work off the clock when labor costs exceeded sales at a store.

“As the alarming stories in this report make clear, Andrew Puzder will do what’s best for big businesses like his own and those at the top—at the expense of workers and their families,” Murray and Warren said in a joint statement.

Since Trump announced his labor pick in December, workers’ rights groups have mobilized against Puzder, a champion of workplace automation who opposes a minimum wage and labor protections, as well as the Affordable Care Act. Trump’s labor nominee told California State University students in 2011 that in “fast food, you sort of compete for the best of the worst.” Puzder added that Hardee’s employees were “the worst of the worst.”

The president has praised Puzder for an “extensive record fighting for workers.”

Demonstrations broke out last week in 31 cities, as cooks and cashiers at Hardee’s and Carl’s Jr. rallied in support of a $15 minimum wage and demanded better workplace conditions at the fast-food chains. Workers at Hardee’s and Carl’s Jr. franchises filed 33 complaints last week, alleging wage theft, harassment, and intimidation at the restaurants.