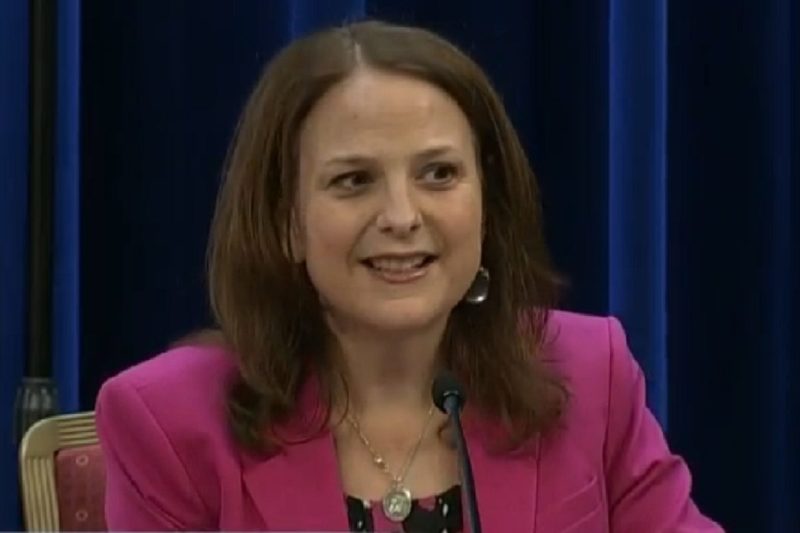 One of President-elect Trump’s policy team members, Katy Talento, has relied on the work of discredited anti-choice activists to push false claims about reproductive health care.

Talento will work on the administration’s domestic policy team on health care. She was described in a Thursday press release as “an infectious disease epidemiologist with nearly 20 years of experience in public health and health policy, as well as government oversight and investigations and program evaluation.” She worked on Trump’s presidential campaign and for members of the U.S. Senate.

Talento’s medically and scientifically unsupported positions on reproductive health care were brought to light after she accepted a position in February 2015 as legislative director for anti-choice Sen. Thom Tillis (R-NC), as Talking Points Memo reported.

In a series of articles published on conservative website the Federalist, Talento pushed dubious claims about birth control, including the myth that hormonal contraceptives cause abortions, miscarriages, and reduced fertility.

She pointed to an article by discredited anti-choice activist Donna Harrison as evidence for some of her claims. Harrison was featured in 2014 as part of Rewire’s “False Witnesses” project for pushing egregious falsehoods about abortion care and using “discredited or fringe studies rather than broadly accepted medical evidence.”

“We have decades of established research that show that contraception does not cause miscarriages, it does not cause abortion—it prevents pregnancy. And that’s clear to everyone who does serious research on this topic,” Dr. Diane Horvath-Cosper, reproductive health advocacy fellow at Physicians for Reproductive Health, told Rewire in an interview about Talento’s appointment.

“It’s really disconcerting that someone who has public health experience is supporting these false claims,” Horvath-Cosper said. “This is certainly something that the vast majority of scientists and doctors agree upon—that birth control not only prevents pregnancy but also has a lot of other really fantastic health benefits that are far-reaching, like the prevention of uterine and ovarian cancers, and that’s very clear from the evidence.”

The American College of Obstetricians and Gynecologists (ACOG) says that oral contraceptives do not have any effect on early pregnancy loss. Studies have confirmed that long-term oral contraceptive use has no impact on fertility. Though conservatives often claim that some forms of contraceptives are “abortifacients,” these methods prevent pregnancy and do not cause abortion.

Horvath-Cosper called the inclusion of Talento in the Trump administration “really worrisome and disturbing.”

“It’s a real concern if this person is going to be crafting health-care policy,” she continued. “What all medical and researchers want or should want, is evidence-based medical and public health policy, and these types of opinions about contraceptives are not informed by the evidence and could result in the creation of really harmful policies.”

“This would be a huge setback for women’s health,” Horvath-Cosper said. “As an OB-GYN, and as someone who prescribes a lot of contraception, I see the positive impact of contraception in people’s lives. And the ability to decide the best time to have children is fundamental to people’s emotional, mental, and economic health.”

In another piece for the Federalist, Talento mocked members of Congress who support making oral contraceptives available over the counter, thinking it “would inoculate [Republicans] against accusations of waging a ‘war on women.’” Talento said doing so puts “those dangerous, carcinogenic chemicals in the candy aisle at CVS.”

In fact, some forms of contraception decrease the risk of cancer, Horvath-Cosper noted.

Moving oral contraception over the counter is supported by ACOG, but experts say that doing so as a stand-alone measure—as some members of the GOP suggest—is insufficient, especially while Republicans otherwise move to restrict access to reproductive health care.

Trump signaled his support for over-the-counter birth control when asked in September about his position on the Affordable Care Act’s birth control benefit, which requires insurers to cover all FDA-approved forms of contraceptions without a co-pay. But reproductive health policy experts say making birth control available over the counter is not a suitable alternative to the insurance benefit.

In a 2015 column for the anti-choice website LifeSite titled “Transgenderism: a thought experiment,” Talento wrote that hormonal contraceptives have led to “eugenic trends, and a general disintegration of children’s rights as the foundation for the legal structure surrounding civil marriage.”

Though the article now lists “LifeSiteNews staff” as the author, a snapshot of the site from June of the year shows that Talento was listed as author. The same post appeared under her name on other sites.

Correction: This article has been updated to clarify Sen. Thom Tillis’ state.