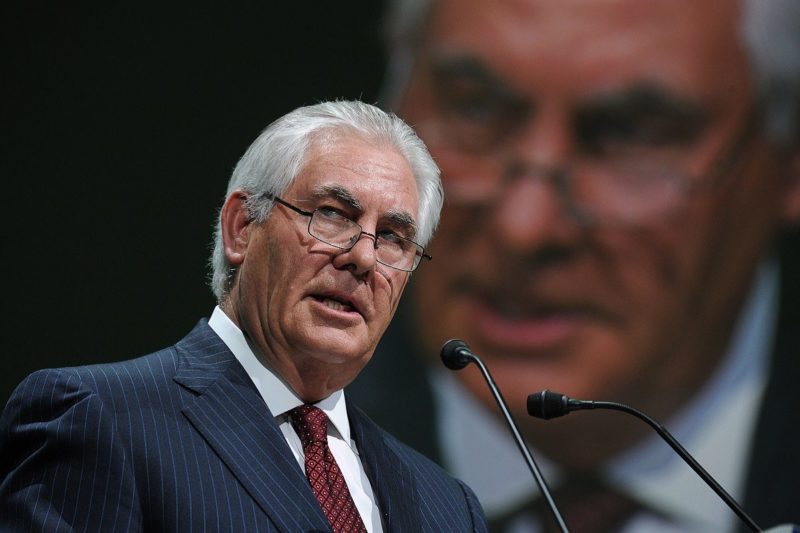 Tillerson began his career at Exxon in 1975 as a production engineer and was named chief executive in 2006.

Tillerson has drawn criticism for his ties to Russia, which the CIA has accused of interfering with this year’s U.S. presidential election. The businessman received Russia’s Order of Friendship decoration in 2012, and his company is primed to earn billions should the United States lift sanctions against Russia, reported the New York Times.

Carroll Muffett, president of the Center for International Environmental Law, said in a Monday interview with Democracy Now! that Trump’s selection of Tillerson is “irresponsible, and it’s unconscionable.”

“It poses a threat not only to the planet, but to human rights,” said Muffet, adding that she had been subpoenaed by ExxonMobil—presumably for her organization’s work investigating the company. “To put—to put the CEO of Exxon in charge of our negotiations on climate change, our negotiations on oil, on energy, on human rights, with countries around the world where this company has interests, where it has a track record of abuses, is patently irresponsible.”

Tillerson has suggested in public statements that climate change fears are overblown.

As NARAL Pro-Choice America noted last week in a memo, the secretary of state “has a unique platform from which to influence global policy and attitudes surrounding reproductive health care.”

One federal policy the secretary of state could influence is the “global gag rule,” also known as the “Mexico City Policy,” which prohibits federal funding for international organizations that provide abortion care or distribute information about the procedure abroad. President Obama lifted the anti-choice policy in 2009, but while it was in effect, “the global gag rule hampered some of the developing world’s most effective family planning programs,” according to the Guttmacher Institute.

Also at stake is funding for the United Nations Population Fund (UNFPA), an agency that “has provided billions in aid for critical family planning and maternal and child health care across 150 countries,” according to NARAL.

Tillerson’s nomination also drew criticism from at least one organization that opposes abortion rights and LGBTQ rights. Tony Perkins, head of the Family Research Council—an extremist anti-choice and anti-LGBTQ organization listed as a hate group by the Southern Poverty Law Center—expressed concern over Tillerson’s impending nomination in a post to the group’s website.

“To hear that Donald Trump may be appointing a man who not only led the charge to open the Boy Scouts to gay troop leaders but whose company directly gives to Planned Parenthood is upsetting at best,” Perkins wrote.

The ExxonMobil Foundation, the oil company’s philanthropic arm, is listed as a donor to Planned Parenthood in the organization’s 2014 annual report, though the company told conservative site the Daily Signal in 2015 that the donations are “based entirely on employees and retirees’ support for these organizations and does not reflect ExxonMobil’s philanthropic priorities or support for community causes.”

Tillerson donated thousands of dollars to anti-choice Republicans during the 2016 election cycle, according to the Center for Responsive Politics’ OpenSecrets.org.