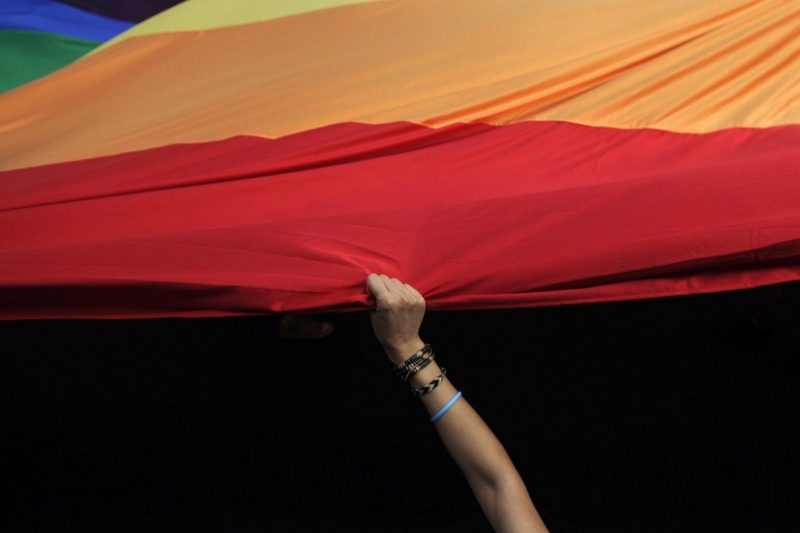 My concern is not so much over the use of the words but over the social meme they have generated that has morphed into a cocktail of historical revisionism, wishful thinking, good intentions, and a soupcon of white, entitled appropriation. Oliver Bunica/AFP/Getty Images

A fellow journalist once described me as a “Native-American scold” in his editorial supporting the use of Native-American sports mascots. He disagreed with my objections to their use. As a result, I pictured myself standing with one hand on my hip and the other holding my mother’s fry-bread skillet as I took folks to task over questionable usage of Native-American images, culture, or spirituality.

At the risk of forever branding myself as that skillet-wielding scold, I am now voicing my concern over the use of the term “two spirit” to describe LGBTQ people.

My concern is not so much over the use of the words but over the social meme they have generated that has morphed into a cocktail of historical revisionism, wishful thinking, good intentions, and a soupçon of white, entitled appropriation.

One image in particular that comes to mind is a 2013 Google Plus post of a Native American elder with the following quote:

Christian leaders, stand on our soil and claim: “gay marriage” has never occurred here. Over 130 tribes in every region of North America performed millions of same-sex marriages for hundreds of years. Their statements are both hateful and ignorant. Your “homosexual,” was our Two Spirit people… and we consider them sacred.

Unfortunately, as often happens, the complex work and research of anthropologists has been used to paint an overly wide brush of Native culture, conveniently overlooking distinct cultural and language differences that Native peoples hold crucial to their identity.

As a journalist and Ojibwe woman, I am troubled by the claims that Native peoples historically described LGBTQ folks as two-spirited and celebrated them as healers and shamans, because the claims are mostly unfounded or only partially true. These sort of simplified black-and-white depictions of Native culture and history perpetuate indiscriminate appropriation of Native peoples. Although the current new meme or legend surrounding the term two spirit is certainly laudable for helping LGBTQ people create their own more empowering terminology to describe themselves, it carries some questionable baggage.

Wikipedia has a refreshingly nuanced definition for the term. Two spirit, it explains, “is a modern umbrella term used by some indigenous North Americans to describe gay, lesbian, bisexual and gender-variant individuals in their communities. The term was adopted in 1990 at an Indigenous lesbian and gay gathering to encourage the replacement of the anthropological term berdache [a non-Native word associated with prostitutes] … While some have found the term a useful tool for intertribal organizing, not all Native cultures conceptualize gender or sexuality this way, and most tribes use names in their own languages. While pan-Indian terms are not always appropriate or welcome, the term has generally received more acceptance and use than the term it replaced.”

Non-Native anthropologist Will Roscoe gets much of the public credit for coining the term two spirit. However, according to Kristopher Kohl Miner of the Ho-Chunk Nation, Native people such as anthropologist Dr. Wesley Thomas of the Dine or Navajo tribe also contributed to its creation. (Thomas is a professor in the School of Dine and Law Studies.)

Despite New Age and popular ideals to the contrary, there is no universal Native-American culture or spirituality. There are over 500 federally recognized Native tribes in the United States speaking several hundred languages. I would never primarily describe myself as “Native American.” I am Ojibwe of the Red Cliff Band of Wisconsin.

Most of us feel quite strongly about the distinct nature of our tribal cultures and languages, most of which are oral and handed down through generations.

Unfortunately, depending on an oral tradition to impart our ways to future generations opened the floodgates for early non-Native explorers, missionaries, and anthropologists to write books describing Native peoples and therefore bolstering their own role as experts. These writings were and still are entrenched in the perspective of the authors who were and are mostly white men.

Miner, who is currently working on a film about LGBTQ elders and spirituality, said to me during a recent phone call, “Two spirit is a totally contemporary term. It was brought to the table because anthropologists referred to us as berdache. Native LGBTQ people wanted a term that could give us the opportunity to take back our identities.”

Although Miner was raised in a Wisconsin family that spoke the Ho-Chunk language, he has been unable to find any reference to LGBTQ people from elders or scholars.

“So much has been lost. [LGBTQ] people had to go underground for so long. I don’t even know who to talk to back home; they are all in the closet.”

Anton Treuer of the Leech Lake Ojibwe tribe and professor of Ojibwe linguistics at Bemidji State University explained to me that “most of the written archival information that we have about our people begins with European contact.”

For instance, the writings of Jesuit priests from the 1600s contain references to “berdaches” and often focus negatively on cross dressing among the Ojibwe.

If we are to truly gain an understanding of the role that gender-variant people held in pre-contact tribal life, however, we must look to the language, according to Treuer.

He further notes, “the role of ikwekanaazo and ininiikaazo in Ojibwe society was considered to be sacred, often because they assumed their roles based on spiritual dreams or visions.”

In addition to written scholarly documents, Treuer regularly works with elders and speakers of the language on his work. Far more than mere consultation, working with elders and other community members ensures that the essence of the language, the primary conveyor of spirituality and culture, remains strong and true.

As elders age and die, much of the past dies with them. Therefore, much of what we know about the roles of the ikwekanaazo and the ininiikaazo has been given to us by the conquerors.

The legacy of Western domination robbed many, including Native Americans, of any religion or culture that fell outside of narrow Western norms.

As many of us have suffered under the unfair shame and blame of this legacy, it is tempting to privilege a more idyllic view of society, such as the imagined world of pre-European contact Native America. Indeed, mainstream media depicts Native Americans with little gradation; they are either romanticized as noble environmentalists driven only by selfless idealism or as the gold standards for poverty, social disease, and despair.

I have often been cornered by well-meaning liberals who hold forth authoritatively about the esteem in which traditional Native-American culture holds LGBTQ folks.

I like to imagine the reception some of my Carhartt-wearing relatives out tending their livestock would offer this homily. I fear it would be a preamble to an ass whooping, much as it would be in other rural areas.

Years of colonization and appropriation by European invaders, as well as the well-intentioned religious hegemony that demonized our spirituality and way of life through boarding schools and other means, has made Indian Country much like the rest of rural America in terms of enlightened treatment of LGBTQ folks. In fact, some tribes have created laws specifically banning same-sex marriage. Gender-variant individuals have a hard way to go, in and out of Indian Country.

Miner agrees. Now living in Minneapolis, he described an especially painful incident when he returned to the Ho-Chunk Nation in Wisconsin a few years ago to attend a traditional cultural event.

“When I brought my husband to a feast, I was told that I was flaunting my sexuality and instructed not to sit with my clan,” he said. Clan identity and affiliation is central to the Ho-Chunk and other tribes and often defines spiritual and social activity.

“I asked my elders what was going on but they just shook their heads. I was so disappointed; I haven’t returned since,” he said.

Native Americans are disappointingly and inconveniently human, just like the rest of the population. Describing us in any other terms reflects a particularly resistant form of racism called entitlement.

“Human beings are pretty complicated,” Treuer notes. “Each tribe had their own way of describing gender variation.”

“There was probably a spectrum of how people lived their lives prior to European contact. The Ojibwe family at that time revolved around physical survival; sexual orientation was only one part of life,” he added.

Overall, however, Treuer opines that people trying to reconstruct an indigenous version of gender as that of greater acceptance, are at least partially correct: “Traditionally, it’s not our way to judge.”

The Ojibwe worldview is the great leveler. According to elders, all beings, human and otherwise, possess one spirit. All are equal and have their own destiny.

As one of our Ojibwe priests has said, “We are all spirits, having a temporary corporeal experience.”