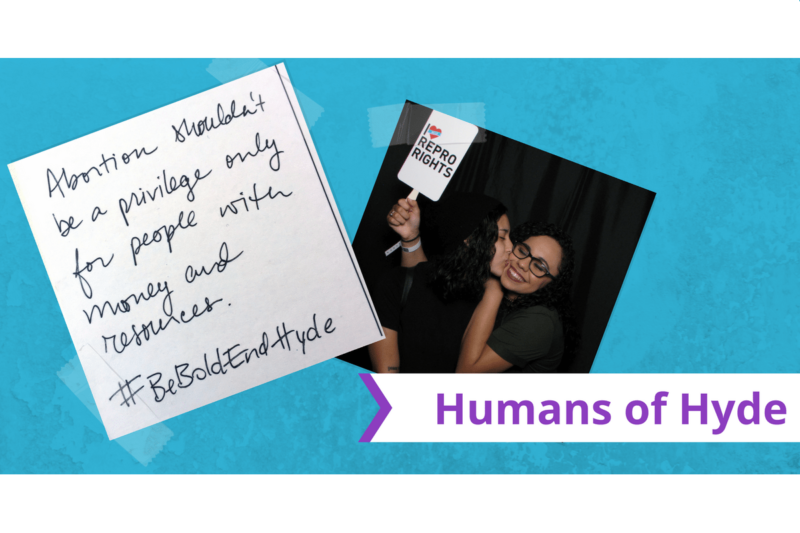 Writing on the postcards, patients made impassioned pleas to end Hyde, like this one, which said, in part: "We must stop treating our sisters, mothers, daughters, aunts, grandmothers, friends & family like second class citizens! Women's rights are human rights!" My Abortion, My Life

The words penned on the white postcard were simple, powerful.

“Your abortion coverage shouldn’t depend on where you live or how much money you have,” wrote one Ohio woman, a patient at Preterm, the state’s largest abortion clinic.

In August, Preterm set a stack of specially designed postcards in the waiting room, offering patients the chance to describe the personal toll exacted by the Hyde Amendment. The federal amendment, which turns 40 this month, singles out abortion care as the sole health-care service that Medicaid will cover in only the rarest of circumstances. Hyde has disproportionately impacted people of color and those with low incomes.

Writing on the postcards, patients made impassioned pleas to end Hyde, like this one, which said, in part: “We must stop treating our sisters, mothers, daughters, aunts, grandmothers, friends & family like second class citizens! Women’s rights are human rights!”

Others faulted the Hyde Amendment for essentially creating a two-tier health-care system: one tier for those who can afford to pay for abortion care out of pocket or who have private insurance, and another tier for those relying on public coverage, who are more typically people of color.

The postcards include this writing prompt: “Ensuring that everyone, regardless of income, has access to abortion services is important to me because…” And as one woman wrote: “Money shouldn’t make you a mother. Because you have money doesn’t warrant a privilege of choice.”

Preterm calls the storytelling campaign Humans of Hyde and plans to continue it through the end of September to coincide with Hyde’s anniversary. The clinic distributed blank cards at the recent All Access concert in Cleveland and in the local community, and is showcasing the hand-written responses on the Humans of Hyde page on the My Abortion, My Life website.

“At Preterm…we see first-hand what the Hyde Amendment does to people’s lives,” Starner said in a phone interview.

Ohio, which has a legislature dominated by Republicans, is among 35 states that follow Hyde by limiting Medicaid coverage of abortion care to extreme cases. Studies suggest that the Hyde Amendment delays abortion care by two to three weeks and increases the number of births.

Ohio also imposes a rash of restrictions on abortion care, including a 24-hour delay requiring two in-person office visits, mandated patient misinformation, mandatory ultrasounds with forced viewing of a fetal heartbeat, and a requirement that providers must tell patients the statistical probability of carrying pregnancies to term, Starner said.

The campaign encourages people to send messages of support and selfies online. The Humans of Hyde page includes this call to action: “We have a bold vision of a future where each of us can get safe and affordable abortion care when we need it.”

Starner said the storytelling project “connects patients’ experiences to the broader movement to overturn Hyde, and invites us all to join together in solidarity.”

“We know patients forgo paying rent and their bills,” Starner said of the struggle to pay for abortion care in the absence of Medicaid coverage.”We know patients who pawn or sell their possessions, or take odd jobs—just to pay for the health care that should be their right.”