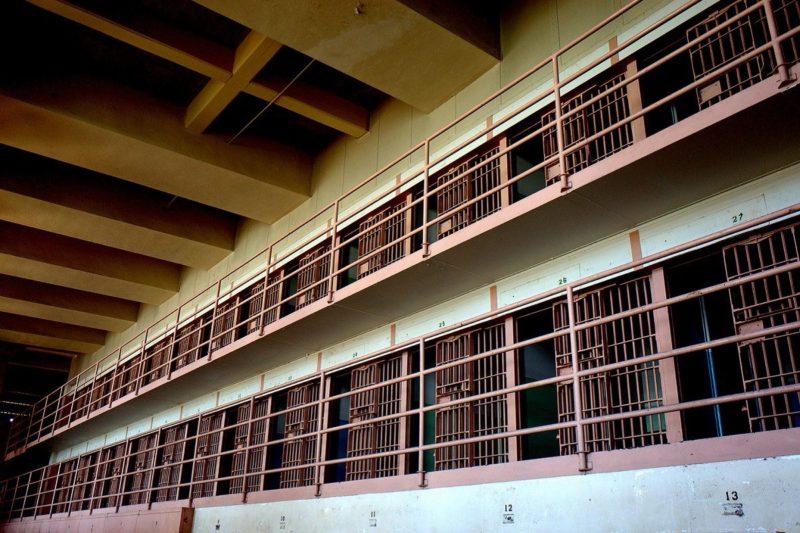 Organizations including the National Advocates for Pregnant Women, the American College of Obstetricians and Gynecologists, and the American Civil Liberties Union have warned that shackling can cause serious harm to the pregnant person and the fetus, and can increase the risk of miscarriage. Travis Wise / Flickr

The Missouri Senate on Wednesday unanimously approved a bill that would prohibit the shackling of pregnant prisoners in “many cases.” The measure comes on the heels of a lawsuit filed by the American Civil Liberties Union (ACLU) on behalf of a former inmate at a Missouri county jail who claims she was shackled, chained, and transported hundreds of miles while in labor with a high-risk pregnancy.

SB 618 is now before the house. It bans the use of restraints on offenders ​in the custody of the Missouri Department of Corrections who are in their second and third trimesters of pregnancy, and for 48 hours post-delivery. There are exceptions for when a doctor deems the person to be a flight risk or a serious threat to themselves, or to correctional or medical personnel.

The bill defines restraints as handcuffs, chains, leg irons, or straitjackets, and provides for a complete ban on leg and waist restraints on pregnant and postpartum people. It further stipulates that correction centers must inform inmates about laws governing the use of restraints, and train their staff accordingly.

State Sen. Jamilah Nasheed (D-St. Louis), who added an amendment putting incarcerated women on the bill, which was originally intended to limit the shackling of juveniles, said Wednesday, according to a report in the Southeast Missourian: “The shackling of pregnant women is a human rights issue. The use of restraints during labor has resulted in a wide range of injuries, from falls to loss of fertility.”

Organizations including the National Advocates for Pregnant Women, the American College of Obstetricians and Gynecologists, and the ACLU have also warned that shackling can cause serious harm to the pregnant person and the fetus, and can increase the risk of miscarriage.

Nasheed added, “The vast majority of Missouri’s pregnant offenders are nonviolent and pose no risk of flight or danger to others, especially during labor.”

At the same time the Missouri legislature is deciding whether or not to put restrictions on the practice of shackling pregnant people, the ACLU has charged multiple employees at the Mississippi County Detention Center (MCDC) with violating plaintiff Tara Rhodes’ Eighth Amendment constitutional rights; battery; and intentional infliction of emotional distress.

According to the complaint, filed Monday in the U.S. District Court for the Eastern District of Missouri, Rhodes discovered she was in her first trimester of pregnancy in September 2014, while incarcerated at the MCDC.

Abdominal pain, cramping, spotting, and bleeding marked the early days of her pregnancy, according to jail records. On October 31, 2014, after weeks of filing a medical request, she was finally allowed to consult an obstetrician, who diagnosed her as having a high-risk pregnancy.

That same day, according to the complaint, the obstetrician faxed a letter to the MCDC stressing that Rhodes required “urgent … access to healthcare” and asked that she be allowed “to make contact with the patient in a timely fashion.”

Subsequent to that appointment, Rhodes posted bond and was released from the jail, the complaint notes. She continued to obtain prenatal care, and on one occasion was accompanied by a person named in the lawsuit as Gina Lummis, who planned to adopt Rhodes’ baby after the birth, according to the complaint.

On December 15, 2014, Rhodes found herself back at the MCDC, the complaint says. Three days later, on December 18, she went into preterm labor. The complaint notes that she was in severe abdominal pain and experiencing such heavy vaginal leakage that “her pants became soaked.”

For five days straight, Rhodes said she repeatedly requested—and was repeatedly denied—immediate medical care, even as she continued to experience intense abdominal pain, vaginal leakage, and blood clots. Multiple staff members were aware of her condition, the complaint alleges, and at various times informed her that she would not receive care until her scheduled appointment on December 23.

In one instance, a guard named in the complaint as Faith Altamirano told her to wear a tampon to “absorb the leaking fluids,” the complaint notes, and on a separate occasion that same employee accused her of faking her symptoms and ordered her to “stop.”

On December 22, unable to walk, Rhodes said she was dragged along the floor to a holding cell and told that if she didn’t stop pounding on the door in a desperate attempt to access care she would be physically restrained. That night, the complaint reads, Altamirano entered the holding cell and instructed Rhodes to pull down her pants and underwear and spread her legs. Altamirano then allegedly concluded that she did not see anything coming out of Rhodes’ vagina.

At dawn on December 23, 2014, Rhodes was shackled at the wrists, ankles, and around her abdomen, and driven 243 miles to the Women’s Eastern Reception, Diagnostic and Correctional Center (WERDCC), according to the ACLU. From there, she was transported another 30 miles to the Audrain Medical Center in Mexico, Missouri.

In total, the journey took over nine hours, the complaint states. Rhodes reported that she was shackled throughout the ordeal and received no medical care despite continued pain and vaginal discharge that, according to the complaint, had “become green in color.” By the time she was admitted for preterm labor, she said, her pants were soaked in fluid, her cervix was dilated two centimeters, and there were fetal parts in her vagina, including a foot.

At 7 a.m., she delivered a stillborn baby boy; the foot that had been dangling in her vagina upon admission at the hospital, the complaint says, was “blackened in appearance upon delivery.”

The complaint notes that her water had broken on December 18, the very same day she alerted jail staff to her condition.

Of the eight defendants named in the complaint, two are being sued for using excessive force against the plaintiff “maliciously and sadistically”—both of whom were responsible for shackling Rhodes, according to the complaint.

This is not the first time the ACLU has filed a lawsuit against a Missouri jail on shackling charges. In October 2015, the organization filed suit against Jackson County and three of its detention center officers on behalf of Megon Riedel, who claims she was transported nearly 200 miles in shackles and chains while in active labor.

“There is no excuse for any Missourian to be shackled by law enforcement or denied health services while in labor,” Jeffrey A. Mittman, executive director of the ACLU of Missouri, said in a statement released Monday. “The fact that the ACLU has to repeatedly take action against jails and prisons across the state for doing so is proof that this is a serious problem in Missouri. The ACLU remains ready to hold every offending institution accountable.”