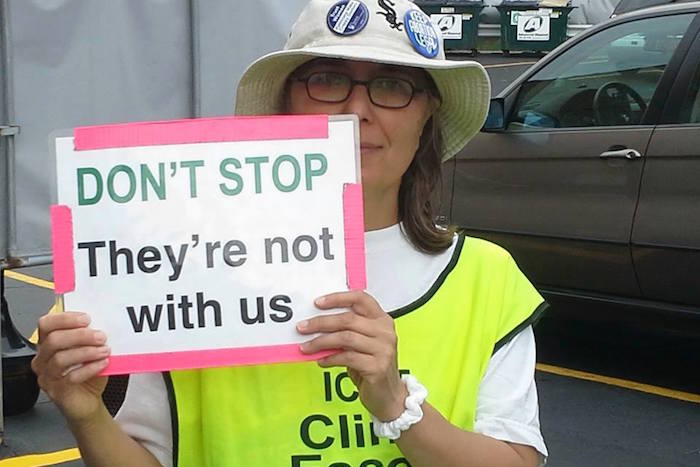 As Benita Ulisano (pictured) recently told Rewire, "Clinics are facing very difficult political and social pressures, but my job is simply to help them help others." Benita Ulisano

As increasingly hostile anti-choice legislatures pass policies aimed at restricting women’s access to quality health care, the Clinic Vest Project is supporting the people who are on the front lines protecting patients’ ability to exercise their reproductive rights.

Benita Ulisano, who’s spent 20 years in the reproductive rights movement, including seven as a clinic escort, launched the project in 2013. It provides free vests and training materials for clinic escorts working outside of clinics that are unable to pay for such supplies across the United States and in Toronto.

Rewire recently spoke with Ulisano about her work prior to starting the project, the effect of buffer zone legislation on clinic escorting, and how she hopes the project’s nonprofit status will enable it to help more people.

Rewire: You’ve been in the reproductive rights field for roughly 20 years now. What did you see in your activism that motivated you to start the Clinic Vest Project (CVP)?

Benita Ulisano: Around the time Bill Clinton won his first presidential election in the 1990s, and given how dangerous some of the environments around clinics were, certain clinics were no longer interested in having clinic escorts. I’m not exactly sure what were all of the reasons for clinics feeling this way and sending escorts away, but being that I had been a clinic escort for several years I knew that the service was still necessary, because antis were becoming increasingly aggressive with people entering the clinics.

I saw firsthand their growing hostility against abortion through my work with the now defunct Illinois Pro-Choice Alliance, which evaluated the climate outside of clinics.

Before establishing a clinic escort program with the Illinois Choice Action Team (ICAT) in 2010, I approached a clinic that previously said it did not need escorts and spoke with the workers there about what they were experiencing with antis and what we as a group had been observing about the climate around the clinic. I asked them if they were interested in having us escort for them. They said yes, and ICAT began doing some escorting for them.

Our group started with one clinic in Chicago, and now we are up to five.

When we are escorting people in and out of clinics, we were wearing clinic escort vests that had “Pro-Choice Clinic Escort” on them. I realized that having these vests helped clinic visitors easily identify us. It is important for patients to know that they have that support when they’re face-to-face with people who don’t agree with their choice. It is also important for the escort to have a vest to identify their role. I have often heard from volunteers that they are “at their best when wearing the vest.” I believe that is true.

Rewire: CVP started sending vests and offering training materials in 2013. How were you financially meeting the demand for vests prior to the project gaining its nonprofit status, allowing it to seek tax-exempt donations, at the end of 2014?

BU: I was paying for them. Instead of sending campaign donations to politicians, I thought my money was better served helping reproductive rights activists on the ground by providing free vests for them. Being a clinic escort outside a women’s health clinic is the closest you can get to the issue of people being able to exercise their reproductive rights without being political.

I view escorting as simply helping folks exercise their right to choose and also access health care. Not everyone we escort is there for an abortion procedure or identifies as pro-choice; anti-choice folks have abortions too, but we do not differentiate that when escorting clients into our clinics. The politics are always there and present, but being there every Saturday makes me feel like I am contributing to helping someone exercise their right to choose.

Rewire: Who is the Clinic Vest Project for?

BU: We are for anyone who wants to start a clinic escort group for a health center that offers a full range of reproductive rights services. We do not provide materials to crisis pregnancy centers, and very clearly state that in our mission statement. Because crisis pregnancy centers do not offer the full range of reproductive rights services, which includes abortion care, we do not feel they are supporting individuals’ rights to all choices. As an organization, we are here to help people help others exercise their reproductive rights and choices. One of our clients is actually an adoption group. Due to its loose affiliation with an abortion rights group, it has been experiencing harassment from antis.

BU: The group in Toronto found us through our Facebook page. I was contacted by the clinic escort coordinator and was over the moon! I was excited to hear from them because it was wonderful for us to know that we would be helping our friends north of our border, and that word of the project was traveling fast. Toronto does have its share of anti-choice protesters; however, I have heard that they are not as plentiful or aggressive as ours [in Chicago].

Working with Pink House and Whole Woman’s Health is really great, however, to us there is no differentiation between clients; they are all important and doing necessary work. In all honesty, my job is the easy part of reproductive rights work. I get the request, ask the client how CVP could best assist them, answer the request, and send them vests and/or materials. Clinics are facing very difficult political and social pressures, but my job is simply to help them help others.

Rewire: In addition to free clinic escort vests, CVP provides materials on how to start and train clinic escorts. How have the recent Republican-led attacks on buffer zones affected the information and training materials your organization provides?

BU: Our materials are not definitive about buffer zones because the zones are always in a state of flux. What our materials do suggest is learning the buffer zone laws in the area and how to proceed accordingly. More times than not, the clients reaching out already know the laws in their area that restrict a woman’s right to choose. I firmly believe that no one knows the issues better than those living them. Therefore, our materials are more supportive in terms of how to make the escorting process as peaceful and non-confrontational for the escorts and the people they are escorting.

The Massachusetts ruling on buffer zones did cause a lot of confusion for people on the ground here in Chicago. We had antis telling us they had the right to be closer to the clinics and people entering and leaving the clinics. They were also telling us [the escorts] that we were next to have our buffer zone taken away. Being on the ground includes knowing what the recent rulings mean for the clinic you are escorting for.

Rewire: Is there any significance or meaning behind how the colors of CVP vests have changed over time?

BU: When we first started out, we were wearing basic orange and yellow safety vests with the words “Pro-Choice Clinic Escort” on them. However, antis began to wear the same colored vests, without the wording of course. This was causing some confusion among clinic visitors, so we decided to begin offering different color options. We also had a specific request from Pink House in Mississippi that its escorts wanted pink vests, so we started offering pink as well. We try to pick specific colors that are hard to replicate so that our vest colors are truly original and antis are less capable of reproducing them. We recently got a candy apple green color that some are very excited about too.

We also offer vests that do not say “Pro-Choice Clinic Escort,” by request. In the interest of respecting clients who may or may not feel comfortable with how political the phrase “pro-choice” is, clinics have requested that the vest not say that. To respect all people involved, we will send those clients vests that say “Clinic Escort Volunteer” on them.

As long as I know the vests are being used to help people exercise their right to choose, and clinic escorts feel comfortable and more confident while they work, I’m willing to work with different requests.

Rewire: What is in store for CVP moving forward?

BU: Now that we are officially a 501(c)(3) nonprofit, we are doing some fundraising through the month of January to help make ends meet. We have an amazing board that I am very excited about. Everyone on the board is so passionate about the work we are doing, and we are looking for ways to continue to help people exercise their reproductive rights.

If I could do one thing forever, though, I would always be a clinic escort. Whenever I put on my vest and help people into their appointments, I feel I am doing something much bigger than myself.

CORRECTION: A previous version of this Q&A incorrectly stated the total number of years Benita Ulisano has served as a clinic escort. She actually has been a clinic escort for seven years, not ten. Also, it was the Illinois Choice Action Team and not the Pro-Choice Alliance that began doing escorting for clinics after they had sent escorts away. We regret these errors.