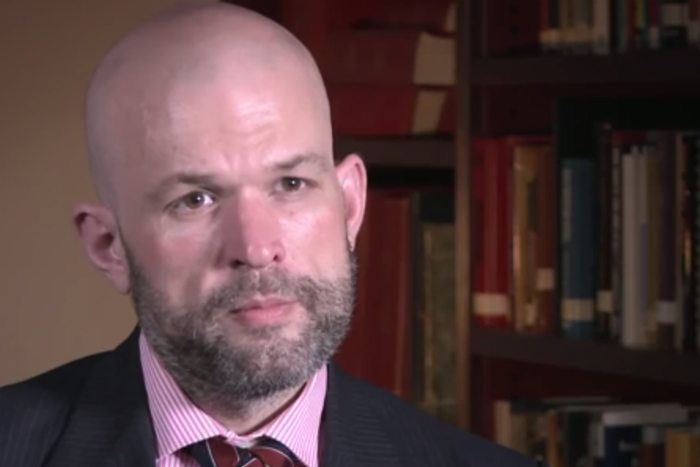 Studies find that women of all religious faiths and traditions, all political affiliations, and all races, classes, and backgrounds have abortions. Columnist Kevin Williamson believes all such women should be hanged. Reason.tv / YouTube

At least one in three women in the United States will have at least one abortion in her lifetime.

Six in ten American women who have an abortion already have a child, and more than three in ten already have two or more children.

Studies find that women of all religious faiths and traditions, all political affiliations, and all races, classes, and backgrounds have abortions. It is one of the most common and safest surgical procedures in the United States. And these women—women like me, and like countless daughters, mothers, sisters, friends, nieces, and cousins—have abortions for a wide variety of reasons, ranging from their own judgment about whether and when they can afford to have a child (or another child), to experiences of violence and violation, to matters of life and death, to “none of your business.”

A columnist for the National Review believes we should all be hanged.

This weekend, Kevin Williamson, whose Twitter bio describes him as a “roving reporter for the National Review,” declared on Twitter that all abortions should be treated as premeditated homicide, and that women who have had abortions should face capital punishment, namely hanging. No exceptions.

@Green_Footballs Yes, I believe that the law should treat abortion like any other homicide.

He did not go so far as to describe in what venues these hangings should take place, but it might be fair to assume that Williamson has in mind public executions, so that other women are made very, very sure of their place in society—which is to say, subservient.

Reading several of Williamson’s columns, I see a man who desperately wants to be taken seriously. His pieces are full of pseudo-intellectual musings and plenty of Very Big Words, in a transparent attempt to prove how smart he is. In a recent piece on Lena Dunham and voting, he reveals deep condescension for women, voters, and anyone who is not (according to his judgment) as smart as himself. Voting, Williamson writes, “is the most shallow gesture of citizenship there is.”

That piece is titled “Five Reasons You Are Too Stupid To Vote.” Williamson offers only one reason. Did he forget the other four?

We should perhaps be thankful that, in another tweet, Williamson stated, “I don’t vote.”

@AmateurPolSc I am against abortion per se in all circumstances.

In an ongoing Twitter exchange, I asked Williamson if he knew women who had had abortions. He said yes. I asked him if he had told them he thought they should be hanged. No answer. I asked again. No answer. I asked if he would tell the women in his circle who’ve had abortions that he believes they committed homicide. No answer. I asked Williamson if, being consistent and applying the laws he supports to his own family, he would allow his wife to die in a circumstance in which her life were imminently threatened by a pregnancy rather than break his no exceptions rule. He would not answer. I asked if his wife opted for an abortion in a given circumstance, including to save her own life, would he report her to the authorities. Again, no answer. The only reply I got was him calling my line of questioning an “elementary-school trolley problem gambit.”

“Go look it up if you don’t understand,” he added.

In short, he gave no answer when asked to apply his legal proposal to his own family. He refused to take responsibility for the laws and policies he espouses.

Pregnancy, however, is not an elementary school “trolley problem.” It is real life. Pregnancy, labor, delivery, childbirth, child spacing, child-rearing, and feeding, clothing, raising, emotionally investing in, and in all ways caring for children from birth throughout their lives are all real-life issues. Sometimes pregnancy, childbirth, and delivery result in the death or illness of women. These are not theoretical “trolley problems.” They are real. They are practical. They involve tradeoffs. I know this, as I am a mother and a woman who has had an abortion. And I understand that every time a woman faces a pregnancy—intended or unintended, healthy or untenable—she faces a set of circumstances unique to that pregnancy and that moment in her life.

Williamson’s answers therefore reveal exactly the problem with his pseudo-academic approach, and that of the anti-choice movement writ large, to the issues women face in sex, pregnancy, childbirth, and the lifelong commitment to other human beings that is involved in being a parent. He and they are bereft of compassion and understanding for the real circumstances of real women. They lack respect for the intellectual and emotional maturity and responsibility real women take as they make rational decisions about either abortion or childbirth when facing unintended pregnancy. In other words, they do not trust women as moral agents to make choices that are best for them and their families. Anti-choicers like Williamson lack understanding of or just simply deny immutable facts of public health, such as the fact that access to safe abortion care is directly correlated to improved health outcomes for women, infants, and children. He is either unaware of or irresponsibly ignores the fact that in many states in this country women are today being arrested for miscarriage and pregnancy loss on the basis of “suspected abortion.” His answers and his body of work reveal a dangerous mixture of misogyny and disgust for women, a wholesale lack of compassion, an inability to face reality, and complete ignorance of public health, medical, biological, and human rights evidence.

And, tellingly, he is unwilling to apply his own rules to his own family.