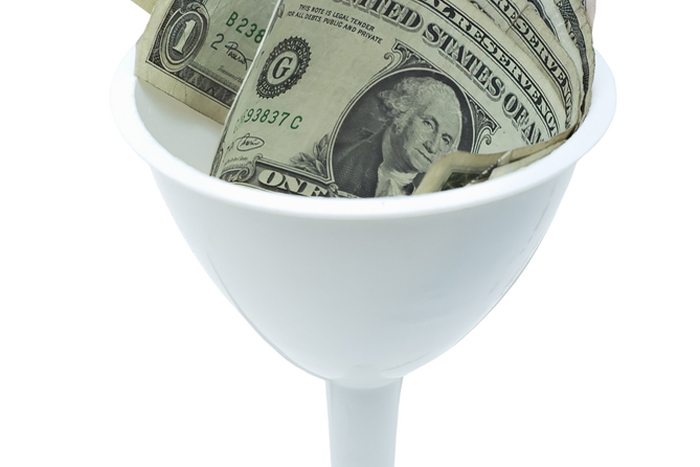 Despite a disastrous deficit of $1.4 billion, the proposed 2014-15 Pennsylvania budget is pouring more money into an anti-choice crisis pregnancy center network that recently made headlines for "failing to see a single client" in another state, despite a significant government contract there. Money funnel via Shutterstock

Update, July 14, 2:10 p.m.: After a nasty budget battle that deepened rifts between state Republicans and Democrats and even Republican Gov. Tom Corbett and fellow conservative Republicans, the Pennsylvania state legislature signed off on spending plan “which no one seems terribly proud of.”

Indeed, there are few winners in the budget produced under the gun of a $1.5 billion deficit. The Philadelphia school system, already gutted down to the bones, recently sent out 342 layoff notices; if a plan to tax cigarettes to generate funding for the district isn’t approved in Harrisburg soon, an additional 1,300 more workers could be out of a job.

Even the specter of schoolchildren literally dying at underfunded and understaffed public schools, though, did not deter the legislature from funneling millions of dollars to centers known to lie to women trying to navigate unplanned pregnancies. The legislature bumped the total amount even higher than the governor’s proposal of $5,644,000: The enacted 2014-2015 budget allocates $5,694,000 of taxpayer dollars to Real Alternatives, an increase of 2.7 percent from the previous year.

Real Alternatives, a Pennsylvania-based anti-choice crisis pregnancy center network, made headlines last week when Michigan state government reporters noticed that their legislature funneled $800,000 to the organization, despite its failure to fulfill the terms of last year’s state contract.

From the Detroit News:

The Michigan Legislature won’t fix the roads. It hasn’t shown much interest in the state’s shockingly high rate of unplanned pregnancy, and infant and maternal death, especially in Detroit.

Yet this month, it approved an $800,000 contract in the 2014-15 budget “to promote childbirth,” alternatives to abortion and abstinence education at crisis pregnancy centers.

That didn’t happen last year, however. Real Alternatives failed to see a single client or sign up one Michigan provider during the first eight months of the $700,000 contract, according to the Michigan Department of Community Health (MDCH). Although Real Alternatives says it recently signed three providers, MDCH is unaware of them.

Despite “failing to see a single client,” the organization received a $100,000 increase in Michigan state funds, even as last year’s allocation sat largely unspent.

$800,000 is roughly equal to the amount of state money Michigan spends on pregnancy prevention education and family planning services, a number that has been steadily going down for at least a decade, according to Lori Lamerand, president and CEO of Planned Parenthood Mid and South Michigan.

“Family planning can’t get any money, but we’re going to hold out $1.5 million allocated for this program that has not been able to spend the grant appropriately,” Lamerand told Rewire.

Despite a disastrous deficit of at least $1.4 billion, Pennsylvania is also pouring more money into Real Alternatives.

Like Michigan, the state’s proposed 2014-15 budget carves out an additional $100,000 for the organization over last year’s allocation. Unlike Michigan, though, Pennsylvania’s funding bump has gone unnoticed amid daily chaotic reports over the deficit and missed budget deadline—and perhaps because it’s deceptively coded in the budget as a line item called “Expanded Medical Services for Women.”

According to a budget request submitted by the Pennsylvania Department of Public Welfare, the state also diverts $1 million of the federal funds received through the TANF (Temporary Assistance for Needy Families) program to Real Alternatives, bringing total taxpayer funding up to $6,644,000.

Funding CPCs with taxpayer money is a radical departure from years past, when state officials across the country openly criticized such organizations as a danger to citizens.

In 1986, Texas’ attorney general challenged CPCs in court, charging “deceptive trade practices.” He said, “women are being emotionally harmed when they go to the center seeking abortions and instead are shown films of aborted fetuses.”

In 1987, a Pennsylvania woman duped into an appointment at such a clinic alleged “lacerating psychological attack.”

From the Philadelphia Inquirer:

“When I told them on the phone that I wanted to terminate the pregnancy, the woman on the other end of the line said, ‘No problem – just come in and see us,’ ” she said. And so she made an appointment for the free pregnancy test Abode offers.

“By the time I left that place, I was so nauseated I just wanted to die,” she recalled.

The CPC business model is built on deception.

A handbook written by the founder of what were once called “problem pregnancy centers” recommends that anti-choice activists open such centers near abortion clinics and employ a “dual naming” strategy, meaning adopt a name similar to a nearby abortion clinic or regulated health center. The centers counsel against birth control, even recommending abstinence for married women who do not want to become pregnant. They give women false information regarding pregnancy and abortion.

“It is deeply disappointing to see this unregulated program receive additional funds,” Sari Stevens, executive director at Planned Parenthood Pennsylvania Advocates, told Rewire. “Any federal and state funding for crisis pregnancy centers results in tax dollars being used to support deception and lies rather than comprehensive and medically accurate information.”

Today, at least ten states fund such clinics directly. Real Alternatives prides itself on training organizations in other states to replicate their business model.

Tax dollars have fueled rapid expansion. Nationwide, there are an estimated 2,300 to 3,500 CPCs, compared to 1,800 abortion clinics. Pennsylvania currently has 13 health centers that offer surgical abortion services, and at least 95 crisis pregnancy centers.

Meanwhile, Healthy PA, the governor’s proposed alternative to Medicaid expansion currently under consideration by the federal government, is also likely to reduce access to contraception; Pennsylvania does not require that private insurance plans cover contraception.

Last year, a report revealed that pregnant women and newborns in Philadelphia fare worse than in the rest of the state and country. The United Nations Population Fund estimates that one in three deaths related to pregnancy and childbirth could be avoided if all women had access to contraceptive services.