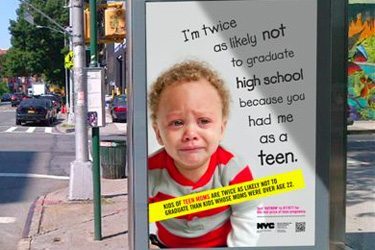 Instead of society saying "Didn't you see the ads? Why didn't you listen? It's all your fault," they should be wondering why decades of scary campaigns haven't worked and start providing support rather than shame. nychra/flickr

Advertisements aimed at teenage parents and splattered across New York City last week by the Human Resources Administration and Mayor Bloomberg’s office are supposedly meant to educate about the realities of teenage parenthood. The ads feature toddlers saying things like “I hope you have a job because I’m expensive.” My personal favorite is the sobbing toddler whose poster reads: “I’m twice as likely not to graduate high school because you had me as a teen.” Somehow, these ads are going to pop into a teens head before having sex to discourage them from having intercourse?

While some may argue that these ads are a fresh, new approach to what is claimed to be an epidemic of teenage pregnancy, I do not see these ads as fresh, new, innovative, or effective.

Instead, these ads are borrowing a page right out of the abstinence-only handbooks that use shame and blame as the basis of their “sex education.” They also take the insults that were directed at me as a pregnant teen and put them all over the city. They do nothing to address the real problems.

These ads place all of the blame and responsibility on female teens. However, teenage pregnancy is not just a female teen problem, it is a social problem.

In a city full of sex, sex clubs, and hyper-sexualized marketing tactics, New York City, the city that touts itself as very progressive is still not teaching comprehensive sex ed, although it is mandated.

While these ads seek to diminish teenage parents, I feel that the people who should feel ashamed and diminished are the older generations who hold the financial and political reins in the city.

In 5th grade, I got a “this is your vagina” lesson from my math teacher. In middle school I was told to repeat this phrase: sex is mint for marriage; I then received a congratulatory graduation mint. In high school I was shown photos of genitalia and infants covered in blisters, sores, and puss.

Not once did one of my “sex education teachers” say there is a difference between sex and relationships, or that there are options available to stop you from getting pregnant and contracting an STI, or that if you do choose to have sex, make sure you are in a relationship and do not feel pressured to have sex.

So when I became pregnant at 15 as a result of unprotected sex I did not understand why older generations were shocked and angry with me.

It is the older generation’s responsibility to teach our youth life lessons, including sex and relationships, and since they are not doing an effective job teenagers feel the need to go out and find the answers on their own. Sadly, they also find sexually transmitted infections, teenage pregnancy, and abusive relationships along the way.

Older generations were and are still choosing not to acknowledge the fact that my generation is different from theirs. That the rules and social moral codes that applied to them do not apply today; that unlike them we do not and will not take “because I said so” as an answer; and that statistics and scare tactics are not a substitute for real education. Scare tactics did not keep me from getting pregnant and they will not stop teens from having sex, stop engaging in unsafe sex, or from confusing sex with relationships.

Believe me when I tell you that no teen mom will say being a pregnant teen or a teenage parent is easy or glamorous, and none would recommend getting pregnant to even their worst enemy. Being a teen mom is hard work, it’s emotional, and it’s tiring, but that’s life!

Going from being a pregnant sophomore in high school to a senior in college looking for a Master’s program has felt damn near impossible. Not because of me or my “lack of determination” or my unwed status. No, it’s been damn near impossible because of societal systems that make it difficult for any mother to go to work and school, much less a struggling mom.

I am more than willing to work with anyone who wants to better understand the social, emotional, and educational factors that can lead to teenage pregnancy. What I refuse to do is to keep getting blamed for society’s problems. I refuse to be the scapegoat of elected officials who, rather than doing their job, point fingers at youth for problems that our elders are causing by refusing to acknowledge those problems in the first place. I refuse to allow people who have never met a resilient teen mom in their life to define who I am as a mother, a human, and a member of society just because I had my daughter at age 15.

As much as adults and elected officials are upset and tired of seeing pregnant teens, so are we. However, unlike older generations we are actively advocating for real comprehensive sex ed, both explicitly and implicitly by becoming pregnant at such a young age and being the only population in the United States in which rates of STIs continue to rise.

So while the mayor’s office and HRA state that they are trying to help teens, in reality what they are ignoring the fact that it is they who are failing to meet the needs of New York City youth at me and my daughter’s expense.

NYC4RJ and several activist have launched a new counter campaign, #NOshameNOstigma. You can learn more about that campaign here.