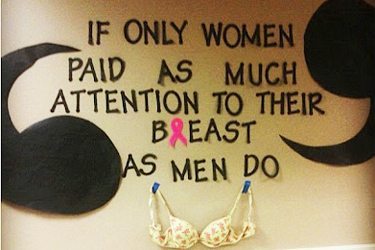 Published in partnership with the Black Women’s Media Collective.

Cross-posted with permission from Furious and Brave.

As we move through Breast Cancer Awareness Month, the pink-ribbon-wearing and consuming of pink commodities are in full swing, and I am reminded why the month of October hasn’t sat well for me for the last two years. That was around the time I stopped believing that drinking out of a pink water bottle was enough to address the severity of breast cancer.

According to an article in Cancer Epidemiology, although black women are less likely to develop breast cancer than white women, black women are 40 percent more likely to die from breast cancer than are white women. Though many researchers have concluded that racial health disparities contribute to these startling numbers, the researchers at the Sinai Urban Health Institute found that residential segregation and lower median household incomes are major contributors to these disparities. Studies have shown that African-Americans who live in isolated communities receive unequal medical care because hospitals serving them have less technology; they live in closer proximity to toxic waste dumps; and they are less likely to have access to recreational facilities.  Segregated neighborhoods are more likely to be poor, and if you barely earn a living wage, you definitely can’t afford health insurance that would cover preventive care (Thanks Affordable Care Act). The pink ribbon does not help bring awareness to the socioeconomic inequities connected to breast cancer; they commodify the disease and make it “sexy” under the guise of raising awareness.

“Saving the Boobies” is a mantra that gets thrown around a lot this month, but it does not properly address how breast cancer adversely affects and ends lives. Talking about breasts as if they are an independent entity, as if it’s the breasts that are worth saving as opposed to the life and body they are attached to is not only patriarchal, but also down right sexist. It implies that a woman’s worth is in her breasts, in her sexuality. There is no “Save the Dick” campaign to raise awareness for penile cancer because unlike dick, boobs are objects of heterosexual male desire. Breastfeeding (another topic for another day) and a little thing called cancer interfere with that. Making breast cancer “sexy” as a marketing device not only undermines the severity of breast cancer but also assumes that women are the only ones with mammary glands. If we cannot have productive conversations about breast cancer without pitting women against their bodies, we will never be able to bring awareness to the early detection of other deadly (presumably un-sexy) cancers like penile cancer, lung cancer, colon cancer, lymphoma, and countless others.’

Though Breast Cancer Awareness Month is necessary, commodifying lives for the sake of “raising awareness” does nothing for creating spaces for a more nuanced and critical discourse around saving lives. It’s also Domestic Violence Awareness Month, and as a reproductive justice activist, I think about the connections between domestic violence and early detection of breast cancer. Sounds far-fetched, but given how abusers control the whereabouts of victims, there is the potential for an abusive partner to limit the frequency of routine check-ups

We must approach breast cancer in the same ways that we approach many women’s issues—from the standpoint of addressing the multiple oppressions that are associated with our multiple identities. We must move past awareness and early detection and start having conversations on how to rectify the inequalities that lead to black women dying more often than their white counterparts. We must also start teaching women and girls how to navigate and control their experiences with health care professionals. Dealing with multiple doctors, racist health-care professionals, and multiple treatment options can be confusing and frustrating. “Saving the Boobies” won’t be nearly enough for the woman in a rural community who may lack transportation to her doctor, let alone knowledge of the best possible treatment for herself. The goal is to save lives. We can’t lose sight of that, and if we expect to do that more effectively, we have to focus on the lives instead of the boobs and give more health care advice than simply “get a mammogram.”