Medical students often must pledge to “first, do no harm,” but in Baltimore, transgender residents and advocates say the care provided by reproductive health practitioners can be severely harmful.

Tea Evren Puck Noonan, a 27-year-old nonbinary artist, said reproductive health-care facilities in the city have pressured them to forgo treatment on multiple occasions because providers were “uncomfortable treating someone like me.”

Noonan’s experience is not unique. Many trans residents in Baltimore describe feeling so unwelcomed by the health-care system that many are hesitant to access professional reproductive care at all. Noonan said they’ve personally heard countless “horror stories” from other members of the local trans community.

“I’m afraid to open up to my providers about my gender identity, and I haven’t received reproductive health care in almost two years,” they said.

Providers in greater Baltimore “seem to have so little knowledge” about treating gender nonconforming patients, Noonan added, that they have spent more time researching and educating providers than actually getting treated as a patient.

Research shows that Noonan’s negative encounters with the health-care system are soberingly common among trans people.

In a June 2020 study from the Center for American Progress (CAP), nearly half of transgender respondents—including 68 percent of trans people of color—reported being mistreated by a health-care provider in the previous year. Twenty-eight percent of trans participants said fear of discrimination led them to avoid or postpone necessary medical care during the same period.

CAP’s findings were similar to those of the 2015 U.S. Transgender Study, the largest national survey focused on documenting the experiences of transgender people in the United States. Conducted by the National Center for Transgender Equality, the anonymous online survey gathered data from more than 27,715 trans adults across all 50 states, as well as the District of Columbia, American Samoa, Guam, Puerto Rico, and U.S. military bases overseas.

Nearly one-third of Maryland respondents who visited a health-care provider in the previous year reported having at least one negative experience because of their gender identity, including being refused treatment, verbally harassed, or physically or sexually assaulted, or needing to educate their provider about trans people to receive appropriate care.

Lee Blinder, executive director of Trans Maryland, a nonprofit focused on connecting trans and nonbinary residents with local resources, as well as guiding them through transition-related legal processes, describes the local medical system as notoriously unwelcoming to trans patients. 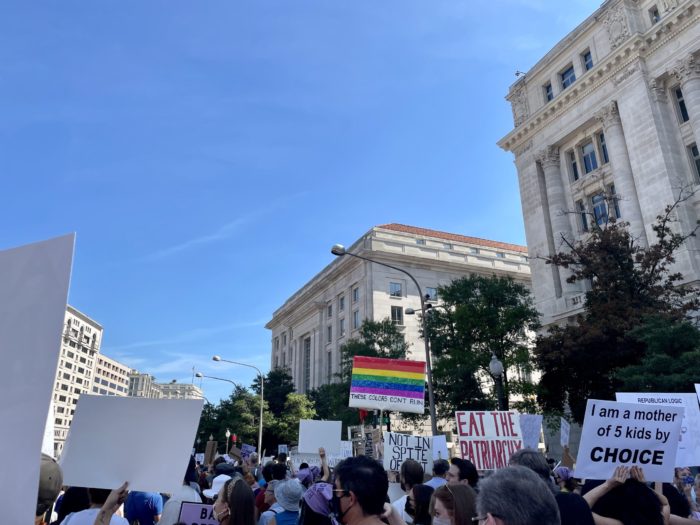 Blinder said there are only a handful of Maryland providers trans residents trust to provide reproductive health care. If a resident also happens to be Black, disabled, or in need of trauma-informed care—intersections Blinder noted are common in the trans community—“the options, already slim, dwindle.”

“The more specialized the care gets, or the more gendered a care tends to be,” Blinder said, “the more issues we see.” Abortion care is arguably among the most specialized and gendered forms of health care.

Forty-year-old trans resident Jessica Blum works from home as an administrative assistant in Harford County, 25 miles outside Baltimore. When it comes to seeking safe abortion care, she said, coupling the barriers cisgender women already face with “all of the hoops and malarkey a trans person would have to go through just if they had a cold” makes a trans person’s chances of receiving safe abortion care “in the single digits.”

In her rural neighborhood, Blum said she “wouldn’t even know where to go or who to call for an abortion.”

Moss Froom, aka Moss the Doula, is the only practicing trans doula in Baltimore. For the past three years, they have been providing gender-affirming pregnancy, labor, and birth services, including postpartum and abortion-related support.

Froom described how health-care providers in Baltimore—even those who market themselves as LGBTQ+ friendly—continue to spread “rampant misinformation.” For example, Froom said many trans patients are told by their doctors that taking testosterone will prevent pregnancy—an idea not backed by scientific research.

“People end up accidentally pregnant because their health-care providers told them it wouldn’t happen,” they said.

Medical providers also tend to assume that taking testosterone will create issues if someone later decides to try getting pregnant, Froom said. On the contrary, “plenty of anecdotal evidence” shows that someone can come off of testosterone “just fine” and have a healthy pregnancy, they added.

A landmark 2019 study by Boston IVF, an international trailblazer in fertility care, supports Froom’s assertion. Based on eight years of patient data, the study concluded that “[assisted reproductive technology] outcomes can be excellent even if testosterone therapy has already been initiated.”

Lactation is another area where misinformation persists. Surgeons often tell people who undergo gender-affirming top surgery that the chest tissues needed for lactation will be completely removed. “That’s not true,” Froom said.

Chest swelling is common during pregnancy, even among those who have had top surgery, according to a 2021 opinion released by the American College of Obstetricians and Gynecologists’ Committee on Gynecologic Practice and Committee on Health Care for Underserved Women. Froom said this experience can cause significant gender dysphoria for trans patients, especially if they aren’t fully informed by their doctor.

Sometimes providers’ assumptions can be directly hostile. Noonan recalled their experience attempting to get birth control several years ago from a prominent Baltimore provider who “immediately assumed I wouldn’t want reproductive services because I’m trans,” and went so far as to suggest Noonan’s trans identity was “a product of trauma and should be treated as such.”

“This treatment makes it hard to trust any reproductive care in the area,” Noonan said.

Froom said the fear of discrimination Noonan described is something they encounter all the time with clients. “People will avoid care if they know they’ll be misgendered or not affirmed,” they said.

Froom has seen this fear create a “dangerous atmosphere” in the local trans community, especially when it comes to abortion access. In a peer-reviewed study first published in March 2021 in the journal BMJ Sexual and Reproductive Health, a high percentage of transgender and nonbinary participants reported either considering or attempting to end their pregnancies without medical supervision.

“Some people talked about inserting knitting needles into their vagina, hammering their uterus—hard trauma to the abdomen,” said Dr. Heidi Moseson, primary author of the study. She also described the reported use of drugs, alcohol, and other chemicals to self-induce abortions.

Moseson, an epidemiologist with Ibis Reproductive Health whose research examines issues related to the reproductive health-care needs of trans and nonbinary people, has written more than 35 peer-reviewed publications. Ibis is a 20-year-old nonprofit research center based out of Massachusetts that focuses on developing data related to sexual and reproductive health to better inform advocacy efforts.

Moseson’s team designed a survey on sexual and reproductive health-care experiences that it administered nationally to more than 5,000 participants, including around 1,700 trans and nonbinary people. The study’s authors concluded that the survey results could reflect the presence of “formidable barriers to facility-based abortion care” for trans people.

Although the medical field is slowly beginning to recognize the need for gender-affirming health care, Moseson said, “There’s still so much work that needs to be done.”