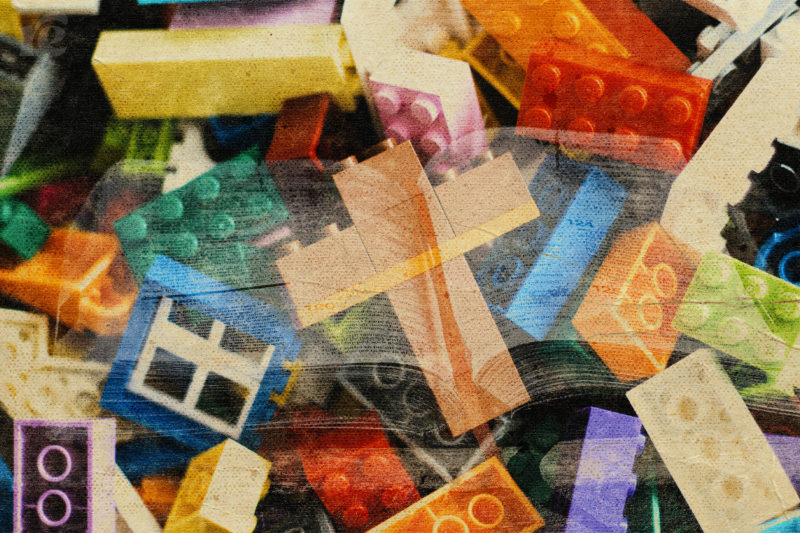 I wanted Legos for my birthday as a kid—but my evangelical family gave me a more "valuable" Bible. Unsplash/Rewire News Group illustration

I have this picture, and it’s a girl around 5 or 6 years old on her birthday. She has light brown skin, a head full of dark blonde curls. She’s wearing a shiny pink party dress and sporting a typical little girl’s big birthday smile. In her hands she is proudly showing off her latest gift—a King James Version Bible. The child is me, and the picture is my Twitter avatar.

From what I remember of my 6th birthday party, a Bible written in old-timey English that I could barely read wasn’t high on my list of things I wanted. I loved Care Bears, Hot Wheels, and Lego sets. Yet, in my family, God always came first. It meant that even for family celebrations, one needed to be humble, grateful, and overall ecstatic to receive such practical gifts. If anything I, at age 6, was meant to understand that my new Bible was the greatest treasure and life tool out of every gift I received.

So I posed and grinned from ear to ear as if I was holding a new toy or the Amelia Bedelia book I actually wanted instead of the umpteenth Bible in our household. To do otherwise would be like slapping w hite Jesus in the face. This memory is a mostly fond snapshot of my childhood as a member of an Independent Fundamentalist Church.

You read that right. If you know of me you may be surprised to know even though I’m the “abortion lady of Mississippi” now, that’s far from how my life started. At age 44, I am an out Black, queer, single parent, nonbinary leader of a reproductive justice organization that funds abortion in the South. Any one of those descriptions would’ve gotten me banished from my faith community the Independent Fundamentalist Baptist Church (IFB) during my early life.

The IFB isn’t a formal denomination or association of churches—it’s more of a set of beliefs held by groups of loosely connected, very, very white churches, Bible colleges, and Christian groups. There is a lot of overlap between the IFB, Quiverfull, young-Earth creationists, Christian dominionists, and others on the extreme conservative end of the Baptist denomination and evangelical belief. When I explain my childhood experiences, people will often say, “Oh, like, Southern Baptist then,” and I nod. The comparison is no coincidence since the IFB was created out of a split from the Southern Baptist Church (SBC) by fundamentalist minister Jack Hyles and others. Hyles felt the SBC was far too liberal and accepting of sin. So he left and started his own independent movement.

IFB churches are known generally known for purity culture, strict gender roles, homophobia, xenophobia, patriarchal views, extreme use of corporal punishment, belief that the King James Version of the Bible and only the KJV is the inerrant word of God (there are several reasons for this, from the belief it’s the best translation and that more modern translations have changes in meaning to just deep feelings ministers have—basically, it’s just tradition), Christian dominionism, and anti-abortion views among other extreme fundamentalist values like very specific dress standards for women.

I didn’t own my first pair of pants until I was 6. My aunt Julie took me to the mall that same birthday I received the Bible and got my ears pierced—a sin. She also gave me a pair of turquoise sweatpants with white stripes on the sides. My aunt had successfully helped me commit two sins in one holiday: wearing pants and earrings. I would wear those sweatpants under dresses all the time. I have lots of stories of my two aunts being subversive on my behalf.

A ‘second-pew seat’ to the rise of the religious right

Years before I made it to that awkward birthday where my white evangelical grandparents thought a Bible was among the top gifts for a 6-year-old, there was the simple story of my parents Laura and Ellis. Two rural people from different races, regions, and generations who fell in love and created me. Me, the biracial Black child of a Black man born in Cullman County, Alabama in 1936 and a white woman born in Virginia, Minnesota in 1953. My father worked construction in northern Minnesota when he met my mother, a waitress who was almost 20 years his junior. My mother had left home and was living a “backsliding” life of smoking cigarettes, drinking, and dating men (a Black man). My parents dated for a few years and even lived together before my mom found herself unmarried, single, and pregnant. My mother told me the story of going home to tell my grandparents she was pregnant and how my grandmother started hollering about my mom shaming the family by having a negro baby and that the baby would be one of those tragic, confused mulattos. My grandfather was supportive. My mom gave birth to me in 1978.

As part of a fundamentalist family, in order to receive the financial and material support of my grandparents, my mom had to return home and live by her parents’ rules, under the “male authority” of my grandfather. As a result, I was raised by my white mother and her parents in the IFB until I was 12 years old with little exception, first in Duluth, Minnesota and then in Superior, Wisconsin. (I stayed connected to the church through my grandmother and my mother until my 30s.)

Within our faith community, I was the 4-year-old with the frizzy, light blonde afro wearing the homemade ankle-length prairie dress who would sing “Jesus Loves Me” to strangers while handing out Chick Tracts—small comic books with extreme stories that have moral messages meant to lead people to God; evangelicals often give them away everywhere they go—and praying for their souls outside the local Kmart. I was the sidekick when we went door to door “soul winning.” (“Soul winning,” or evangelizing, is when those very perky people come to your door and want to talk about Jesus. We were there to win your soul for Jesus.) Kids can help you get in the door to talk to people.

My whole world was our church. We were at church for Sunday school, morning and night service, Wednesday evening service. On Thursday we met at someone’s house for Bible study, plus one morning of door to door soul winning. We were often part of the sick and shut in ministry, where you call and go visit the elderly and sick members who are unable to attend church. We were on rotation to clean the church every month too. Every morning started with devotions and every night ended with scripture reading and prayers. Feel like you need a refresher service on a day off? No worries—we had taped sermons to listen to. Life for me in the IFB was rigid, all encompassing, and very lonely. In the IFB, you only associate with others who believe like you. You are taught that you are “in the world, but not of the world”. I was trained like this before entering public school.

I had a second-pew seat every Sunday to the rise of the religious right. My home was consumed by right-wing media. My grandmother’s clock radio was set to wake me up every morning when James Dobson’s Family Talk came on. To this day, I cringe when I hear the theme song. We heard every Moral Majority presentation even though my grandmother said Jerry Falwell had an ego the size of Lake Superior. My family debated homeschooling me and did homeschool my cousin. We received all the anti-abortion propaganda and all the anti-gay rhetoric. I listened to my family and church demonize people with HIV or AIDS.

In fact, people in my church prayed for the deaths of gay people, and I was present for all of it. I attended record and book burnings. I was taught to never disagree with men. I pledged allegiance on Sundays to the U.S. flag, the Christian flag, and the Bible. I made it through Satanic Panic. That and so much more really was my life. Even with all the trauma my cult life brought me, when I hear news that involves the rise of Christian nationalism, I often have to stop myself from going down a rabbit hole of searching for people I knew when I was a fundamentalist Christian.

Many were obvious monsters I hope have left this earth. There are, however, so many people I knew who were not malicious people; they were harmful people, but not willfully so—people like my grandparents. I will love my grandparents until my dying day. I like to think that if my grandfather had lived to see this current rise in Christian nationalism, he would say, “That’s too much,” and walk away. I want to think he would love his Black family members enough to listen to us, but then I remember that my grandfather woke up every Sunday and willingly drove me to a church that let people speak against interracial marriage. A church that discussed not hosting a couple who was in an interracial marriage. A church that blamed me for my molestation at the hands of my cousin. The church that publicly shamed and shunned my mother for cohabitating with a man.

The IFB consumed my grandparents’ lives, including their finances. They truly felt they owed God their lives. My grandfather had been an alcoholic rager in his younger years. I know my grandmother struggled to feel useful in a world where she had her wings clipped. Now as a middle age-Christian, he was a deacon and an amazing grandfather. He didn’t drink or smoke. My grandmother credited prayer while I credited the passage of time and growing up.

My grandparents were not highly formally educated people. My grandfather was functionally illiterate until I was in elementary school, but he could build anything. My grandmother dropped out of school in the seventh grade. They both were talented and smart people. They both also fell for the church’s appeal to fear. My mother fell in line. Fear is a powerful weapon. The church gave them a purpose. It gave them something to study, master, and feel empowered to be the expert in. It gave them certainty in times of fear while appealing to the worst parts of themselves and compelling them to ignore toxic behavior. It doesn’t excuse them, my mother, or anyone else. I’m just saying cults be culting.

As I‘ve watched Christian nationalists’ views move to mainstream primetime TV—flowing from the mouths of lawmakers—I can’t help but reflect on hearing similar things years ago. I never thought I would hear them go back to saying the quiet part out loud, but here we are. The arguments for keeping to ourselves. The messaging of xenophobia. The racist undertones and overtones. The appeals to fear and morality. I’ve seen this before, and none of it’s good.

It’s why I can say with certainty that nothing is new. The groundwork of Christian nationalism runs through the history of the United States. Its seeds have been growing within the evangelical movement for decades. People can and do leave. I didn’t even know my own opinions about abortion and many other issues until I left. My mother and I got out. My grandmother had moved away before she died. She even had a Bible that wasn’t a KJV! There is a way through for some, but it takes time and Job-like patience.