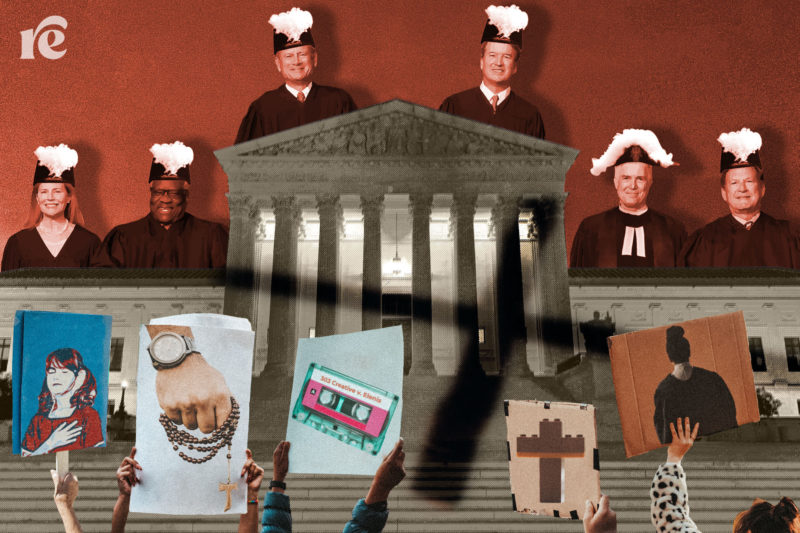 The rise of Christian nationalism is a top-down approach drummed up by the GOP and other conservative leaders as a way to protect their power. And the Supreme Court is in the middle of it. Cage Rivera/Rewire News Group illustration

The Supreme Court’s decision almost six months ago in Dobbs v. Jackson Women’s Health Organization to upend legal abortion in this country represented a major push forward in Christian nationalists’ project to reimagine the boundaries of our civil society, and, in particular, who gets to fully participate and under what conditions. Since the decision, the Court’s conservatives have accelerated this project in radically dangerous ways.

First, they have responded in kind to the Republican Party’s lurch to the far-right and open embrace of anti-democratic principles by issuing more and more substantive decisions on its shadow docket. Second, the Court’s conservatives, led by Justices Samuel Alito and Clarence Thomas, have started actively rewriting decades of legal precedent to help pave the path for even more regressive anti-democratic policies to emerge from states that are held in conservative gerrymandered capture. States like Texas, where lawmakers pre-filed a slew of anti-LGBTQ bills, including one that could potentially make it a crime to be trans in public, are answering the Court’s call with alarming speed.

And third, like many of their Republican counterparts across the country, the Court’s conservatives have started to set their sights on attacking the last line of defense we have to hold the powerful to account—the press.

But what do we mean when we talk about Christian nationalism? The GOP’s open embrace of it has brought the term back into the political conversation—even publications like the Washington Post now use it in headlines, which suggests a certain mainstreaming of both the term and the underlying ideology—but there’s little discussion around what it actually means to be a Christian nation. And that is largely by the design of those who hope to take us there.

At its core, Christian nationalism is the belief that this country is explicitly Christian and that our laws and society should be structured to reflect that. It is an anti-democratic set of beliefs that discriminates against any who do not share the narrow, dominionist worldview from which Christian nationalism flows. Nowhere was that more apparent than January 6, 2021 and the flood of Christian nationalist symbolism that the insurrectionists displayed.

A Christian nation is one where the state regulates women and those with the capacity for becoming pregnant to the role of homemaker and child-bearer. It is a country where Black and brown folks are effectively erased from civic life and the ability to participate fully in it because of a belief in the inherent superiority of Christian whiteness. And it is a country where the free-flow of information is redirected toward censoring entire viewpoints—and their speakers—that challenge the supposed supremacy of Christian patriarchy and its traditions. It is a country where the courts are stacked with ideologues and the rule of law tilts away from justice and towards tyranny.

After the overturn of Roe v. Wade, journalist Katherine Stewart wrote the following in a New York Times op-ed:

Breaking American democracy isn’t an unintended side effect of Christian nationalism. It is the point of the project. … Its purpose is to hollow out democracy until nothing is left but a thin cover for rule by a supposedly right-thinking elite, bubble-wrapped in sanctimony and insulated from any real democratic check on its power.

The rise of Christian nationalism in this country isn’t springing authentically from the conservative grassroots. It’s a top-down movement whipped up by Republican politicians and movement leaders as a way to protect their power because their policies are so wildly unpopular.

That’s why the conservative justices are smack dab in the middle of it all. The Court’s conservative operatives are helping to wage a war against an openly secular United States. Should they succeed, they’ll take our democracy with them.