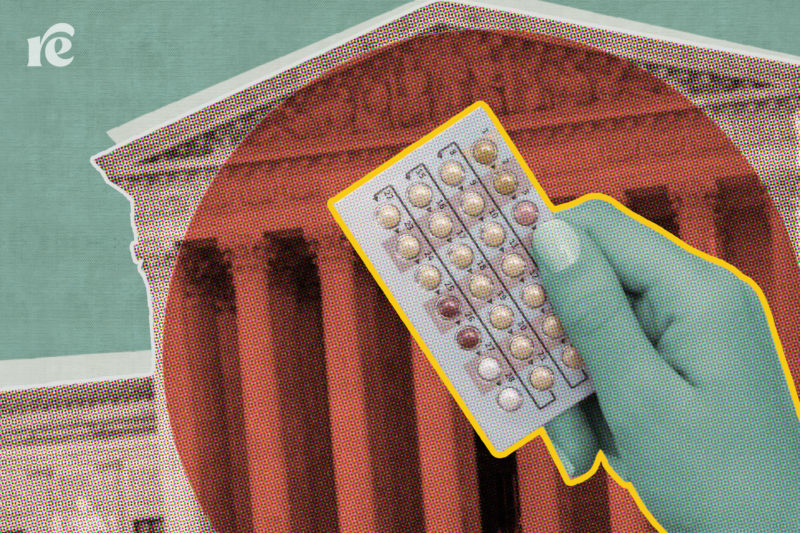 As they did with abortion, the Supreme Court could take away the right to contraception as established in Griswold v. Connecticut. Cage Rivera/Rewire News Group illustration

UPDATE, October 27: The FDA announced Wednesday it is postponing its advisory committee meeting to review OTC status for birth control.

After the Supreme Court threw abortion access into turmoil when it overturned Roe v. Wade in June and conservatives signaled that birth control is one of their next targets, the U.S. government took two important steps toward contraceptive equity. The Food and Drug Administration announced in July it will consider the birth control pill for over-the-counter (OTC) status. Granting OTC status would revolutionize contraceptive access for people who can become pregnant. In the same month, the House of Representatives voted to codify the right to birth control, but the Senate blocked it.

“It’s scary right now, people saw the writing on the wall in the decision, that Justice Thomas in particular is interested in getting rid of the right to birth control,” Mara Gandal-Powers, the director of birth control access and senior counsel for reproductive rights and health at the National Women’s Law Center, said about Dobbs v. Jackson Women’s Health Organization. “I think people who are realizing that maybe the right to abortion isn’t as successful as they thought it would be for the rest of their lives are now thinking about, ‘OK, what I am using for birth control? What are my options?’”

“It gives us another way of getting the birth control that we need and fills a gap,” Gandal-Powers said. “Right now, in terms of over-the-counter contraception, we have over-the-counter emergency contraception and external condoms … To have something that is over the counter and is in control by the person who could get pregnant and is for routine use, it’s a whole new world.”

Nimisha Srikanth, the president of Feminists for Reproductive Equity and Education (FREE) Aggies, a direct-action group and a Planned Parenthood Generation Action chapter at Texas A&M University that educates students about reproductive justice and distributes sexual heath resources to their community, strongly supports OTC birth control because of its implications on college students’ reproductive autonomy.

“College students can only access birth control through prescriptions,” Srikanth said. “For some, they secretly obtain prescriptions through doctors. Some utilize online services and get pills shipped to them. We are in support of making birth control available as an over-the-counter medication. … This would also allow more distribution services to provide pills to help those who may not be able to purchase pills monthly.”

The FDA has ten months to review the birth control pill OTC application. The likelihood it getting approved is high, Gandal-Powers said.

“For most products that have gone from this prescription to OTC process, I think there has only been one that didn’t get the OTC approval [within a ten-month period],” Gandal-Powers said.

Yet, she warns that birth control opponents could potentially influence the FDA to compromise on contraceptive equity.

“From what I’ve seen, if the FDA made a decision to not allow the pill to go OTC or do what we saw them do with Plan B with slapping an age limit on it—those actions would not be based in science,” she said.

The FDA placing an age limit on OTC birth control is not the only potential threat. The Supreme Court cases Griswold v. Connecticut and Eisenstadt v. Baird currently protect the constitutional right to birth control, but the Court’s conservative wing may add birth control to their rollback of rights agenda—and a section from Thomas’ concurring opinion and a footnote in the Dobbs v. Jackson Women’s Health majority opinion demonstrates exactly how they’ll do it. Thomas argues the Court should overturn Griswold and other substantive due process opinions. The justification for doing so may be an incorrect and incomplete reading of the histories of birth control, racism, and eugenics.

In 2019, when the Court declined to hear a case about Indiana’s anti-trait-selective abortion law, Thomas wrote a concurring opinion, in which he incorrectly entangled the histories and uses of abortion, eugenics, and racism. He explicitly wrote that “the use of abortion to achieve eugenic goals is not merely hypothetical.” Reproductive rights legal scholars such as Melissa Murray originally theorized that this concurrence could be the framework for invalidating Roe v. Wade on racial discrimination grounds. This framework could definitely be used for overruling Griswold, as the birth control pill was unfortunately associated with eugenics.

Alternatively, the Court could argue just as it did in Dobbs that it should not be the arbiter of such a “controversial” topic and remand the right to contraception to the states. Footnote 41 in the majority opinion draws attention to an anti-abortion amicus brief submitted by Black and Latine religious organizations, which argues that “the birth control movement, abortion advocacy, and eugenics are all rooted in Social Darwinism and the elimination of undesirable populations.”

Regardless of the potential flawed legal reasoning that could result in the overturn of Griswold, the right to access birth control is in a precarious position.

“With more attacks on reproductive freedom, contraception access should be codified into law,” Srikanth said.

House Republicans resoundingly voted against the Right to Contraception Act despite the positive public consensus around contraceptives. Combined with the politicization of birth control access, the setback disheartens Gandal-Powers.

“I believe we are at the beginning of a wave [of] unprecedented attacks on contraception, attacks on both the right to access contraception and the things that make it possible to actually get contraception,” Gandal-Powers said. “I don’t love that politics is more of a player in that decision about your own birth control choices, but that is the reality we’re living in. It’s not the reality we want.”

Advocates envision different yet kindred paths forward so people can have full reproductive autonomy and access to contraception.

“There are some states where they may want to make the right to birth control even more explicit in their constitution,” Gandal-Powers said. “In terms of practical access, we’ve seen states enable pharmacists to prescribe birth control, in addition to doctors, nurses, and midwives. As I look to the future and where our movement is going, we will be showing up to both the proactive and defensive work leading with our values: Everyone should have access to the contraception they want, when they want it, without barriers in their way.”

Srikanth believes in a direct-services approach and said she would like to see an equitable distribution of birth control.

“The main goal should be that all people can access and purchase any contraception they desire at an affordable price,” Srikanth said. “Such wins will help empower society as a whole and promote true equity in all ways.”