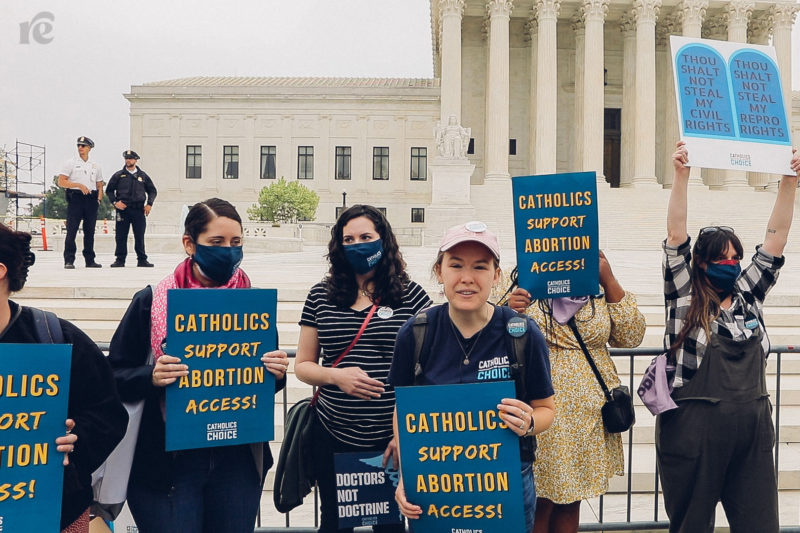 When Shae was pregnant, she wanted to deliver her baby at St. Joseph’s Hospital in Phoenix, since the pandemic meant she wasn’t allowed a support person. Because she worked at the hospital, her coworkers could come visit her and the baby after the birth even if her family could not.

In November 2020, Shae, whose last name is being withheld for privacy reasons, was working as an occupational therapist at the Catholic hospital when she became pregnant with her first child. At her 20-week ultrasound scan, she learned the fetus had three serious health concerns, including myelomeningocele, a particularly severe form of spina bifida that worsens during pregnancy and can sometimes be halted with fetal surgery; however, the procedure is extremely invasive and risky for the pregnant person.

Shae’s doctor did not bring up abortion as an option, although her husband did. Instead, the doctor made appointments for the couple to speak with the handful of fetal surgery centers around the country.

After weighing the grave risk of fetal surgery to both her own life and future fertility, Shae decided to end the pregnancy. But before she could make it to the abortion appointment that her obstetrician at St. Joseph’s had booked for her, she woke up with severe stomach pain. She went to St. Joseph’s again, where she was told that her white blood cell count was “a little high,” and they were concerned that she might have a uterine infection from the amniocentesis.

While waiting for her test results to come back, Shae was comforted by the kindness of the staff, one of whom told her explicitly, “You’re making the right decision.” Still, the doctors and nurses were unable to offer material aid, saying, “If your body’s starting to do something, we can help that along, but, otherwise, you know, we can’t help you,” and sent her home to wait for her abortion appointment at the clinic.

The Catholic hospital chain Dignity Health, a subsidiary of CommonSpirit Health, owns St. Joseph’s. CommonSpirit Health is the second-largest nonprofit hospital system in the country. As a Catholic hospital system, it follows the Ethical and Religious Directives, a document written by the United States Conference of Catholic Bishops and now in its sixth edition. As such, its hospitals do not offer abortion, contraception, sterilization, most modern fertility treatments (including IVF), many types of gender-affirming care, or euthanasia.

In fiscal year 2021, CommonSpirit Health took $690 million in federal pandemic relief funds. That amount does not account for the millions of taxpayer dollars the mega-chain took in via Medicare and Medicaid reimbursements. In other words, CommonSpirit Health is taking millions annually from taxpayers to provide health care controlled at every turn by 260 Catholic bishops.

“Only two segments of the hospital industry are growing: for-profit hospitals and Catholic hospitals. All other types of hospitals are declining in number,” Lois Uttley, senior adviser for the Hospital Equity and Accountability Project at Community Catalyst, told Rewire News Group.

Today, nearly 1 in 6 beds in U.S. hospitals is owned by a Catholic facility. These facilities take in nearly $48 billion of taxpayer dollars annually, while simultaneously serving a lower percentage of low-income patients than their secular nonprofit counterparts.

So just how did we get here? And just how far does the ability of Catholic hospitals to deny health care go?

Jessica Martucci, a bioethicist and historian at the University of Pennsylvania, said that 1 in 6 beds being Catholic hospitals “are not accidental.” Church leaders have been steadily working to gain control of the U.S. health-care system for at least the last century. The current situation is not some market-based happenstance, but the “result of many decades of careful work and planning and a real orchestrated effort to insert Catholic ideas, or at least Catholic ideas as they are interpreted by the bishops, into the American health-care system.”

By the 1930s, Catholic physicians’ guilds had enough power to form a national organization, the National Federation of Catholic Physician’s Guilds, which would go on to influence the policy of the American Medical Association. They learned early on to argue with secular standards of care not by turning to explicitly religious terms, but by cloaking their theological objections in “secular and commonsense understandings of biology and the natural world.”

Martucci said making Catholic doctrine on the family seem “natural”—and thus healthy and morally good—allowed it to gain an eventual foothold in everything from early La Leche league leadership and the WHO policy on breastfeeding to discourses around abortion and birth control in the United States over the course of the 20th century.

But while that could explain why St. Joseph’s in Phoenix is there in the first place, and why a giant Catholic hospital system owns it, it still doesn’t explain why it’s legal to deny Shae health care on religious grounds, or just how bad her suspected infection would have had to be before they would have been obligated to treat her.

When asked to comment on Shae’s case, Dignity Health and St. Joseph’s Hospital and Medical Center in Phoenix said “Catholic hospitals also typically provide more care for at-risk and low-income patients [than their secular nonprofit counterparts],” a claim which is both factually untrue and irrelevant to the matter at hand. They also noted that “very few elective abortions are typically performed in hospital settings,” which is true, but an outgrowth of abortion stigma in large part perpetuated by the past century of Catholic influence in U.S. medical care.

Dignity Health further stated that while it does not perform “elective abortions,” “procedures that are required to save the life of the mother are medically necessary and not elective.” In other words, if Shae had been sick past a certain point, they would have performed an abortion. But what, exactly, is that point? And what happens if they get it wrong?

To answer how bad Shae’s potential infection would have had to have been before St. Joseph’s would have been legally obligated to treat her, I spoke to Ronit Stahl, a professor of history at the University of California, Berkeley. Stahl traces the history of conscience protections in the United States back to wartime military service. It was only much later in U.S. history—essentially, once abortion and birth control became viable options scientifically—that the question of conscientious objection in health care started to appear.

The Church Amendment passed mere months after the Supreme Court decided Roe v. Wade in 1973. It was specifically modeled on conscientious objection to the military draft, but instead legally insulated recipients of federal health-care funds—i.e., Catholic hospitals—from having to provide or participate in abortions or sterilizations. At the time, Sen. Frank Church thought it went without saying that his amendment wouldn’t apply to emergency medical situations, but hundreds of stories from women denied critical care since the 1970s have proven him wrong. Stahl wrote in Law, Religion, USA that unlike in war, however, where conscientious objectors had to take up a noncombatant role, those refusing to provide healthcare in no way had to “compensate society for their refusal.”

The 1990s into the early 2000s saw a rapid and massive broadening of health-care conscience rights beyond hospitals, starting to extend these rights to entities like insurance companies and pharmacies (and eventually second-rate crafting stores). In other words, it’s not just the Catholic pharmacist who can refuse to fill your misoprostol prescription on conscience grounds, but the Dignity Health-owned pharmacy itself.

This extension of conscience rights to institutions occurred at the same time as the Coats Amendment passed in 1996, protecting OB-GYN residencies that refused to provide training in abortion care from losing their accreditation. Meanwhile, in 1995, the American Bishops held a conference called “The Splendor of Truth in Healthcare,” struggling with the ascendant question of how to handle mergers—and a religiously pluralistic patient population—in Catholic healthcare.

How far does the religious shield of the Church Amendment and its legal heirs extend? Can a Catholic hospital let someone die, or damage their health or future fertility, and not be subject to civil or criminal penalty? Stahl said we honestly don’t know.

“For almost 50 years,” she noted, “Catholic hospitals could effectively dodge the issue,” because they could transfer people to other facilities. But increasingly in a post-Roe landscape, that will no longer be the case.

With the post-Roe landscape reshaping health care, Uttley said that in states with abortion bans, we see “large geographic regions of those states where the only hospital and all the associated outpatient services are run by Catholic hospitals, and therefore, patients can have difficulty obtaining desired contraception and sterilization.” How badly this confluence of factors will affect maternal mortality and morbidity, let alone long-term economic health, remains to be seen.

And indeed, after the Supreme Court overturned Roe in June, the clinic that provided Shae’s abortion closed. It eventually reopened, but Tonya Irick, the director at Family Planning Associates Medical Group in Phoenix where Shae received care, told Rewire News Group they were only able to provide care up to exactly 16 weeks of pregnancy as of August 30. At that point, St. Joseph’s had only one clinic left in the state they could have referred her to at all.

Today, Shae would have no options in Arizona. Judge Kellie Johnson ruled on Friday that a Civil War-era law banning abortion in Arizona and imposing jail time for providers could take effect. While that law will likely be appealed, a 15-week ban took effect in the state the next day. New data from Planned Parenthood in California shows an 847 percent increase in patients traveling to California from Arizona in the weeks after Roe fell in June, when all the states’ clinics temporarily stopped operating. It’s a hint of what now awaits pregnant people in Arizona in the weeks and months to come.

Correction, September 27, 2022: This story has been updated to accurately reflect Shae’s uterine infection. The number of Catholic bishops was also corrected.