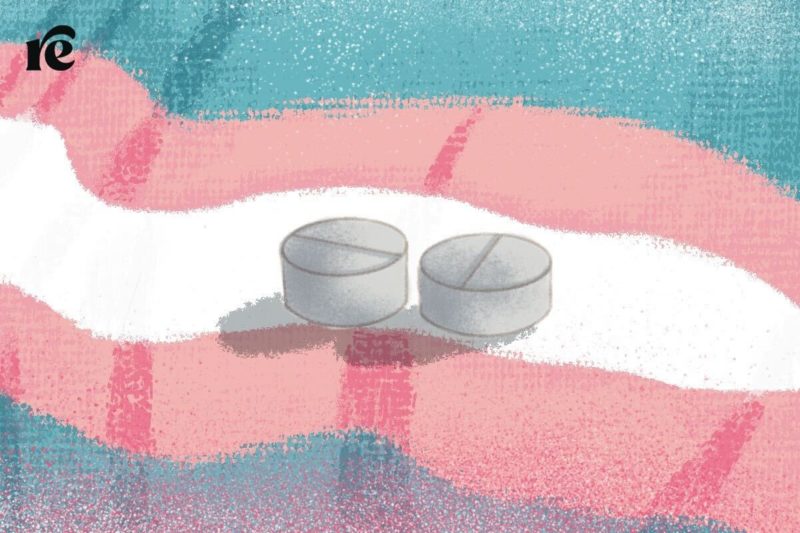 In early May, the Supreme Court’s leaked majority draft opinion signaled its intent to overturn Roe v. Wade. In such an event, 13 states would automatically ban abortion due to “trigger” bans still on the books. Other states would enforce six-week bans that would outlaw abortion before many people even know they’re pregnant.

With the rise of self-managed abortion and the support of abortion funds, people in these states will still have some options to safely terminate their pregnancies. But research shows that abortion restrictions create gaps in access that disproportionately affect low-income communities, communities of color, and young people.

Abortion restrictions also harm trans men and nonbinary individuals, many of whom have the capacity to get pregnant and thus deserve access to abortion services.

To understand how overturning Roe v. Wade will affect trans communities, we must consider the recent surge of anti-trans legislation across the United States. From prohibiting trans youth from competing in student athletics to criminalizing gender-affirming care, these laws claim to protect women and children.

In reality, they’re about two things: controlling families and ensuring electoral support from the religious right.

Abortion restrictions and their inflammatory rhetoric reinforce anti-abortion stigma. This has a ripple effect on access because when people internalize anti-abortion messages, they are less likely to reach out for emotional and practical support. My own research shows that how we talk about abortion shapes people’s actual abortion experiences.

Anti-trans legislation has a similar stigmatizing effect. But politicians are not the only culprits. In a 2020 survey by the Center for American Progress, nearly half of transgender adults reported facing at least one form of mistreatment or discrimination from a health care provider, and 40 percent of respondents (and 54 percent of transgender respondents of color) avoided preventative screenings out of fear of discrimination.

Trans people feel even more stigmatized when it comes to reproductive health care. Services such as Pap smears, prenatal visits, and abortion are often siloed into “women’s clinics,” excluding and alienating people who aren’t women but still need these services.

Language evolves. One way to support trans folks is to say pregnant people, rather than women, when discussing access to abortion and other reproductive services. Organizational practices can also evolve. Some Planned Parenthood centers and independent clinics now offer hormone replacement therapy and trauma-informed care for trans patients.

In addition to these strategies, activists use storytelling as a way to destigmatize abortion. Projects such as We Testify, Abortion Out Loud, and Shout Your Abortion provide a platform for people to share their abortion experiences. By centering and amplifying the stories of trans and nonbinary people, our movement can begin to address these compounding forms of stigma.

Beyond banning abortion and gender-affirming care, some states are trying to criminalize these services. For example, Texas SB 8 includes a provision that private citizens can sue someone for aiding in an abortion. Meanwhile, the state attorney general issued a directive to prosecute parents as “child abusers” for helping their kids access gender-affirming care.

These strategies disproportionately impact low-income communities of color. Not everyone can afford to cross state lines to access medical services. Without insurance, a first-trimester abortion can cost up to $750 out of pocket, which doesn’t even include travel, lodging, and childcare expenses.

Increased travel costs are particularly challenging for trans people who, due to employment discrimination, are more likely to live in poverty—the 2015 U.S. Transgender Survey found that 29 percent of trans respondents were living in poverty, while the national poverty rate was 13.5 percent. For Black, Indigenous, and Latinx trans individuals, this rate is even higher, meaning that for many trans folks, abortion is already out of reach.

People shouldn’t have to leave their communities to access medical care.

While some states are moving to criminalize abortion and gender-affirming care, other states are preparing to support an influx of patients from neighboring communities. One state senator filed a bill to turn California into a “refuge” for trans youth and their families.

Such efforts will help some people and their families survive hostile political environments, but people shouldn’t have to leave their communities to access medical care. Furthermore, until we address other forms of state surveillance, low-income families of color will remain at risk.

Reproductive justice, coined by a group of Black activists in 1993, means that all people deserve the power and resources to decide whether, when, and how to parent. Activists are concerned both about barriers to abortion and the lack of structural support for parents, including affordable childcare, pregnancy support, and—most recently—the formula shortage.

In addition to my research on abortion, I study transgender parents’ experiences. I find that trans parents have similar struggles as other groups (don’t expect to get too much sleep for the first couple of years!) but also face some unique barriers. For example, trans parents may deal with discrimination in family court and false accusations that a parent’s transition will somehow harm their children.

The transgender parents I’ve talked to have fulfilling parent-child relationships, often with the support of partners, families of origin, and their communities. But nobody should be coerced into parenthood.

As the Supreme Court threatens to overturn Roe v. Wade, exacerbating current barriers to abortion, activists must consider how restrictions impact different social groups, including trans men and nonbinary individuals. Anti-abortion and anti-trans legislation reinforce one another and extend the reach of the state in its effort to regulate disadvantaged families. By acknowledging and organizing around this intersection, activists create opportunities for coalition building and resistance. We are stronger when we work together.