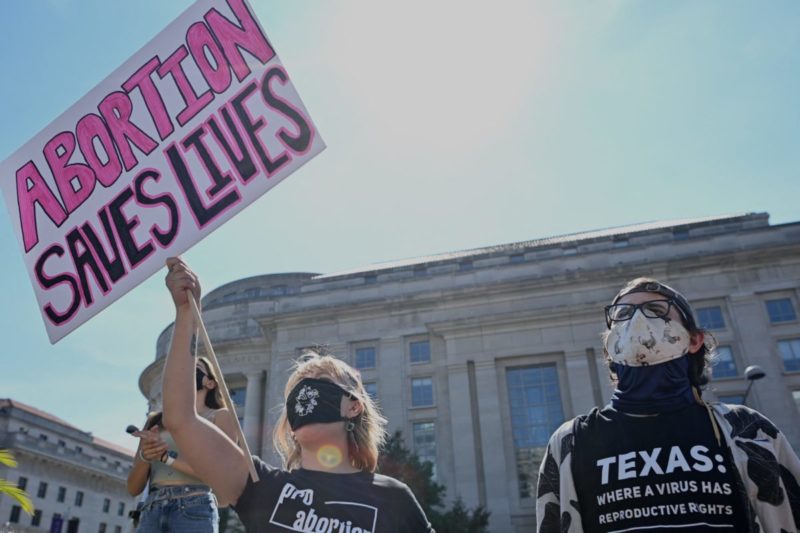 States enacted more than 100 abortion restrictions in 2021, the most in a single year. Mandel Ngan/AFP via Getty Images

As a rabbi who lives in Texas, I have long been active in local groups that organize clergy to fight for reproductive rights. Most recently, we have been working to resist SB 8, the Texas law that went into effect September 1 and which bans abortions at six weeks’ gestation, before many people even know they’re pregnant.

When a Christian colleague, whose name I won’t reveal for the sake of his safety and that of his church, asked me if I would like to serve in January as chaplain for a group of 20 pregnant people on a one-day trip out of state to obtain abortions, I was glad to do it. The clinic we traveled to in New Mexico has a unique relationship with one in Dallas that provided abortions before SB 8 was passed. It continues to do so for those few patients who still qualify under the new restrictions. Since 2013, Texas law has required two visits to an abortion provider: the first for a sonogram and the second for the abortion itself. There is a minimum 24-hour waiting period between the two. Under SB 8, pregnant people must have a second sonogram when they come back for their second visit to make sure they still qualify.

The women I accompanied had both sonograms at the Dallas clinic but were deemed ineligible for an abortion. None of them were more than eight weeks pregnant, and several were less than six, but they could not get an abortion in Texas because their sonograms showed what is misleadingly referred to as “fetal cardiac activity.”

The patients were between the ages of 19 and 40, and all but the youngest were women of color. These are women who can’t afford an abortion and don’t have the flexibility to spend a night away from home. The New Mexico Religious Coalition for Reproductive Choice paid for their flights and other costs, while the Texas Equal Access Fund and other abortion funds, the names of which we can’t disclose due to security reasons, paid the medical fees. And yet they were the lucky ones. These 20 women represent a fraction of the patients who were able to access abortion care in Texas even before the passage of SB 8.

We met at 7 a.m. for breakfast at the church, then embarked on our flight. Most of the women received medication abortions; some had procedural abortions. One of the women dropped her children off at school before we left and picked them up from cheer practice at 8 p.m., after we returned. Another could get only one day off work by agreeing to work a double shift the next day. One has two toddlers and a serious medical condition. One has three older children and worried that if she had a baby now, she wouldn’t be able to parent them adequately as they enter and go through adolescence.

Before SB 8 passed, these women would have driven to the local clinic, either alone or with a loved one. Instead, they had to get on a plane with strangers and, as a safety precaution, be careful not to talk in public about what they were doing. It was a beautiful, sunny day in both cities, but 20 degrees cooler upon arrival in Albuquerque than when they departed Dallas. Many of the women shivered throughout the day.

We are fighting an uphill battle, yet we know that most people of faith are opposed to abortion bans, as well as restrictions that essentially amount to one.

Because of the need for discretion, I couldn’t talk to the women about what we were doing until we were in the clinic or at the church where they rested before and after their clinic visits. When we did have the chance to connect, I mostly listened. They berated themselves for not being careful enough. Some of them worried that God would punish them for their choice. None of the women were Jewish, but several of them seemed glad to learn about the Jewish perspective on abortion. I told them I’d had an abortion, and that Judaism doesn’t see abortion as killing a baby.

I learned that many of the women already were, or were studying to be, essential workers: teachers, social workers, and nurses. Having a baby would preclude them from not only caring for their families as they felt it necessary, but also from serving the populations they feel called to teach, counsel, and treat. These women were taking this step to preserve and protect life, not to snuff it out. One woman, whose husband drove her to Albuquerque from Dallas, sat on a bench in the courtyard outside the clinic and cried tears of rage. She was angry at herself for letting this happen, and angry at the legislators whose actions interfered with her private decision to such an extreme degree. I offered the hope that these women would look back on this day as one of salvation rather than judgment. That they would remember they all did this together, sharing the experience and developing a camaraderie.

Even if the Supreme Court weakens SB 8 in some way, which is unlikely, it will remain nearly impossible to get an abortion in Texas. Several cities in the state have placed municipal bans on abortion, and even on some forms of contraception.

And Texas is not unique. In fact, U.S. states enacted more than 100 abortion restrictions in 2021, the most in a single year. The experience I was privileged to share with these women is just one example of how leaders of all faiths are doing our part to protect life: by making abortion as safe and accessible as possible. We are fighting an uphill battle, yet we know that most people of faith are opposed to abortion bans, as well as restrictions that essentially amount to one.

Many people who hear my story say they envy my opportunity to do something tangible to help pregnant people continue to access reproductive health care, including abortion. Right now, there are two ways to help. First, make sure your elected officials know how you feel, that you want them to pass laws that help pregnant people rather than hurt them. But political and legislative change takes time, so for now, please contribute whatever you can to support organizations—like the New Mexico Religious Coalition for Reproductive Choice—that work to protect abortion access every day.