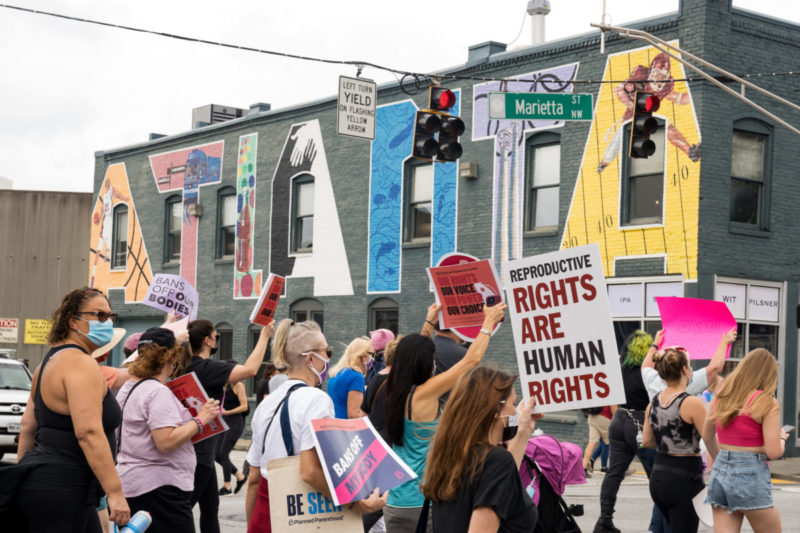 Cities could be where we create the world we dream of, one with unrestricted abortion access and full equity. We can build from there. Megan Varner/Getty Images

Roe v. Wade will fall, and abortion will almost certainly become illegal in most of the South and Midwest when the Supreme Court rules in Dobbs v. Jackson Women’s Health Organization.

In places like my home state of Texas, abortion is already only a hair’s breadth away from inaccessible. As clinics fight to stay open, we must continue supporting abortion funds so those organizations are able to help their clients travel the ever-greater distances to cities in other states that still have abortion services. And all of us must step up our efforts to protect and expand abortion access in those cities. While it’s late to sound this alarm, I’m hopeful that much can still be done.

Given the horror show that is the current news about abortion rights and access, maybe it is not surprising that when voters in Lubbock, Texas, approved a city-level abortion ban last May, there was not much coverage in the mainstream media. After all, Lubbock is in Texas, where the state government has been in all-out assault mode against abortion rights, so news like this wasn’t much of a surprise.

Every couple weeks for the past few years, a small city in the United States passes a municipal-level abortion ban, all instigated by the work of one Texas pastor. But until Lubbock, not one of the towns that passed such a ban actually had a clinic operating there. Unfortunately, Lubbock won’t be the last.

As the founder and director of Equity Agenda, an organization that partners with city governments and mission-aligned nonprofits throughout the country to increase gender equity at the local level, I have spent nearly two decades working in gender equity, abortion rights, and city government. When I started my career in reproductive rights, we in the younger generation were fighting to direct our attention and resources to state governments because we knew then that Roe was insufficient. Twenty years later, we finally have at least a critical mass of reproductive health, rights, and justice organizations and funders focused on the state level. Unfortunately, this came after the anti-abortion movement had already developed broad state-level infrastructure and expertise that is effectively interconnected with the broader conservative movement—coordination on a scale that abortion rights organizations can’t yet match.

Today, I see us repeating the mistake of ignoring a particular field of battle, of ceding ground at the city level that needn’t be lost because of the belief that such efforts aren’t as effective or powerful as working at the state or federal levels.

But abortion clinics exist nearly entirely in cities, and city governments have the power to make it easier or harder to ensure access. For instance, cities can regulate protests and sidewalks and street access and noise (Spokane, Washington); subject clinics and health facilities to zoning regulations—aka TRAP laws—designed to burden providers and make it difficult to obtain abortion care (San Antonio, Texas); and direct resources toward keeping, or at least attempting to keep, providers and patients physically safe (Knoxville, Tennessee), to name just a few areas of concern.

The likely outcome of Dobbs v. Jackson Women’s Health puts an even finer point on the risk to access posed by not prioritizing cities. There are signs of the opportunity that pushing back against these bans can be successful, but there’s also a tremendous risk in failing to marshal resources and expertise at the city level. A proposed ordinance in Lindale, Texas, would criminalize providing help to people to access abortion outside the city limits.

Even though resources for abortion rights are always less than we would hope, even comparatively small investments in creating robust local government efforts will be meaningful.

Lubbock’s ordinance should have been a wake-up call to all of us—especially those in the abortion rights movement, including funders—if all the small-town bans leading up to it weren’t enough already. At the end of January, the appeal to overturn the Lubbock ban was abandoned, illustrating clearly the limits of relying solely on a defensive legal strategy at the local level.

I’m thrilled to partner with the National Institute for Reproductive Health, one of the only organizations funding proactive local work, in generating progressive abortion wins in big liberal cities. But it’s also crucial to invest in defending abortion rights, especially in the Midwest and the South, and that reproductive rights, health, and justice organizations work to increase their expertise in municipal government operations and local politics. Local city coalitions that are built around a framework of issues that impact people who are not white, straight, cis men—issues such as abortion access, police violence, public safety, and care infrastructure, among others—could be incredibly powerful foundations for progressive action.

I also work with women mayors around the country. During a recent conversation, I discussed with one West Coast mayor the likely tsunami of abortion-seeking people the clinic in her city will likely see after the Supreme Court issues its decision in Dobbs v. Jackson Women’s Health later this year. Such a deluge of patients is easily foreseen: Clinics in states around Texas continue to face similar waves of abortion-seekers months after the Texas Legislature passed a six-week ban. And many of the states currently seeing abortion patients from Texas may end up with no clinics of their own after the Court’s ruling in Dobbs, increasing the pressure on cities with clinics even more.

The mayor’s politically moderate city is only one of the foreseeable targets for a ban by anti-choice activists. Unfortunately, very few resources are available to help the city prepare to support the clinic as demand dramatically increases, or to brace for a local abortion-ban effort, because of the paucity of resources for municipal work.

Last July, the Guttmacher Institute reported that 30 cities in six states had passed abortion bans over the previous three years. In just six months’ time, the 40th city in Texas alone considered a ban; the city council rejected the proposal in January. Nearly all these municipal-level bans are the result of just one activist’s organizing efforts, which have been well-resourced and paid for by anti-abortion funders. Their strategy has always been to chip away at our rights, and now we can see clearly the landslide that has been created at the state and federal levels as well as in the courts. We can’t allow this same dynamic at the city level.

It’s also worth mentioning that the roots of the bounty-style Texas abortion ban are the same as those of the local bans. We can and must fight back. Federal, state, and legal work is as critical as ever, and even though resources for abortion rights are always less than we would hope, even comparatively small investments in creating robust local government efforts will be meaningful. Working at the community and city levels will create returns on investment for our work at every level of government and at the ballot box, but we can’t just reuse the same strategies and tactics.

We know that a majority of Americans support abortion rights. This is true even in small towns. We can defend and increase access to abortion at the local level in many parts of the country if we increase resources dedicated to local government work, and especially local government expertise, within the movement.

Cities could be where we create the world we dream of, one with unrestricted abortion access and full equity. And we can build from there. To address the risks and take full advantage of the opportunities, we must adapt and learn how to be effective at the local level.