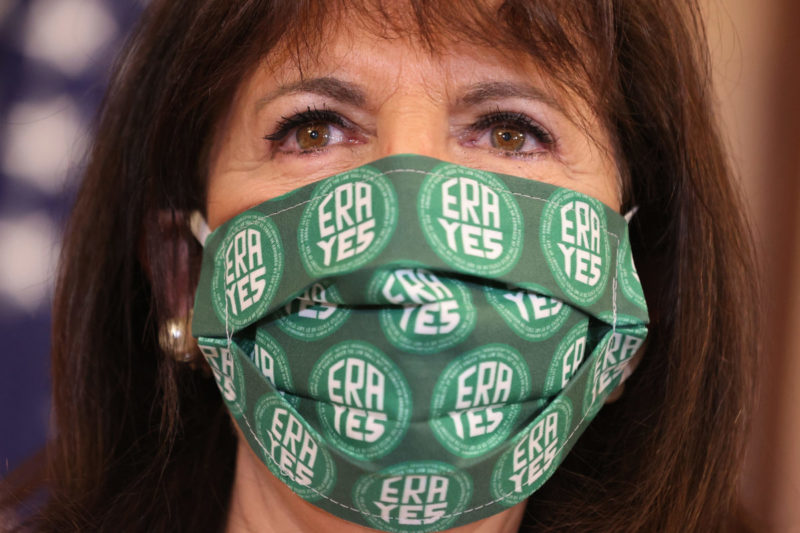 Countries that have looked to us as a model for their own constitutions have recognized the equality of women and men, yet we fail to do the same. Chip Somodevilla/Getty Images

In January 2020, a little-known office in the Department of Justice put out an opinion that the Equal Rights Amendment was dead.

Mere weeks later, Virginia became the 38th and final state needed to ratify the ERA. But instead of shouting from the rooftops and marching in the streets celebrating that the ERA is finally part of our Constitution, we’re living with the Trump administration’s dark legacy keeping the U.S. archivist from recognizing the amendment.

Today, on the two-year anniversary of Virginia’s ratification and the date on which the ERA should be going into effect, I introduced a resolution affirming once and for all that the ERA is the 28th Amendment.

You may be wondering, what’s the big deal? Aren’t women and men already equal?

Despite the tremendous progress women have made, we are still a deeply unequal society. In subtle and not-so-subtle ways, women are violated with impunity, denied the pregnancy accommodations they deserve, and discriminated against by being paid less for their work.

Just ask Christy Brzonkala, who said she was raped by two football players at Virginia Tech. She sought justice under the Violence Against Women Act, but the Supreme Court struck down the federal civil remedy she used to sue her rapists, claiming Congress lacked the power to pass the legislation under the Constitution’s existing amendments.

Or Tracy Rexroat, whose starting salary at the Arizona Department of Education was $17,000 lower than her male colleague’s for the same job because of her salary history. A federal district court ruled that unequal starting salaries don’t violate the Equal Pay Act because salary history is an acceptable reason for unequal pay.

Or Jessica Lenahan, whose estranged husband kidnapped and murdered their three young daughters after the police repeatedly refused to enforce a restraining order she had obtained against him. The Supreme Court ruled that Lenahan didn’t have a protected interest in the enforcement of her restraining order.

Or Peggy Young, who was put on unpaid leave—without health insurance—by UPS when she got pregnant. The Supreme Court set such a stringent standard that in two-thirds of cases after Young’s, courts ruled against pregnant workers seeking reasonable accommodations such as rest or water breaks.

If we had the ERA, these cases most likely would have had different outcomes.

Simply put, the ERA will finally guarantee protections against sex discrimination in the Constitution. It will empower Congress to better enforce and enact laws protecting women and confirm the rightful place of gender equality in our foundational document—not subject to the whims of Congress or the White House. It will also ensure the Supreme Court uses the most demanding standard of review in cases of sex discrimination the way it already does for race-based discrimination.

We’re not asking for the moon. Of 193 United Nations countries, 165 address gender equity in their constitutions. Countries that have looked to us as a model for their own constitutions have recognized the equality of women and men, yet we fail to do the same.

The Trump Department of Justice opined that the time had come and gone for the ERA’s ratification because of an arbitrary time limit included in its preamble. But the Constitution says nothing about deadlines, and there can be no expiration date on equality. If the 27th Amendment could be added to the Constitution 200 years after it was first proposed, why should the women of America wait any longer?

That’s why the Department of Justice must rescind its deeply partisan opinion on the ERA, and why the U.S. archivist must immediately certify the ERA as the 28th Amendment.

I know that all of us will keep fighting until we achieve the eternal promise of “equal justice under law.” Mark my words: We will get this done.

Rep. Jackie Speier is the co-chair of the Democratic Women’s Caucus.