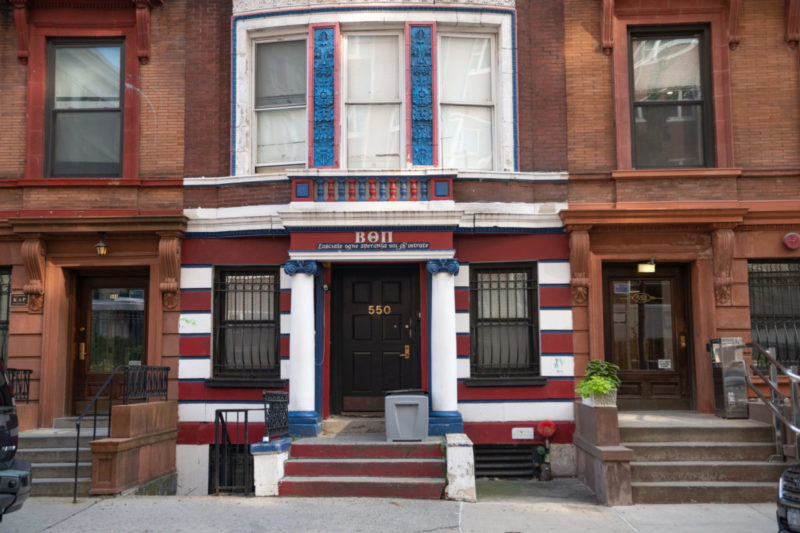 Columbia University has banned fraternity parties on campus this fall to prevent the spread of COVID-19. Alexi Rosenfeld/Getty Images

As the fall semester speeds into full swing, some chronically ill and disabled students are becoming increasingly concerned about how the campus life that others are enjoying could be putting their lives at risk. Potential superspreader events such as fraternity parties are becoming more frequent during the fall, while online classes are no longer an option for those who are more vulnerable at some universities like the University of California, Berkeley.

So far, Columbia University is one of a handful of schools to take a strong stance by banning fraternity parties on campus this semester, in a bid to keep in-person classes safe for students. We believe that all universities should take the same appropriate measures to protect students, including after the pandemic is over.

Many campus outbreaks have been linked to fraternity parties. A study followed one Arkansas university in fall 2020 and found that a major COVID-19 outbreak of 965 cases directly followed rush week. The researchers used network analysis to identify transmission-related campus gatherings, and found that 91 percent of gatherings were “linked by participation in fraternity and sorority activities.” Over 30 percent of the infected participated in fraternity and sorority events, and 15 percent lived in fraternity or sorority houses.

More concerningly, fraternities have also been found to break campus COVID-19 rules on many occasions.

“Frat parties don’t really follow the same strict guidelines and rules that organizations, airlines, airports, and other bigger social events do,” said Dr. Varuna Srinivasan, a women’s health expert. “It’s a bunch of kids getting together to party together and no one really wants to dampen the mood by talking about COVID.”

Srinivasan explained how the lack of fraternity oversight in the past has led to hazing, deaths, and sexual assault—and that lack of oversight could be extending to COVID-19 rule compliance. Her research on Greek life has revealed how high peer-pressure situations and a group mentality could lead students to more risk-taking behaviors, leading to the disregard of their own health. And in the current situation, their disregard involves putting other students at risk—particularly disabled students.

“In this case, it should really be the universities’ responsibility to suspend all frat parties,” Srinivasan said.

Going out to fraternity parties and participating in activities unmasked, especially on campuses that do not have a vaccine mandate, may seem like a personal decision. But it can have far-reaching impacts on the whole university community.

“Members of these Greek houses move about campus and the community, frequenting classrooms, restaurants, bars, friends’ dorms, and homes,” Dr. Namvar Zohoori, Arkansas Department of Health’s deputy director for science, told Rewire News Group. “This can increase the potential of spreading any infections contracted within the Greek houses to the rest of the campus and community, putting even larger numbers of potentially at-risk persons in jeopardy.”

Ellen Gurung, a public health graduate student at George Mason University who lives with lupus, said that as someone with an autoimmune disease, she isn’t comfortable with the idea of partying on campus.

“I think the sororities and fraternities need to consider the needs of those with autoimmune disorders and other medical conditions when navigating rush week and other activities,” Gurung said. Greek life has a history of not being inclusive of disabled students. Notably, a George Mason student with Down syndrome was rejected from every sorority in fall 2018.

It’s frustrating that universities, even when they have COVID-19 protocols, do not do more to try and protect disabled and chronically ill students. For example, while the University of California, Berkeley requires masks indoors, these rules are often not enforced at sorority and fraternity houses. Perhaps, by putting disabled and chronically ill students in danger by allowing Greek life parties and activities to continue on campus, universities are failing to provide reasonable accommodation.

Being a disabled college student has its own challenges even in non-pandemic times—such as fighting to receive proper accommodations—and universities should not be making accessibility harder.

The pandemic has disproportionately affected disabled and chronically ill students, even outside the danger that Greek life poses. A December 2020 paper published in Disability Compliance for Higher Education found that disabled students are more likely to have experienced lowered wages, food and housing insecurity, and a major depressive disorder episode than non-disabled people during the pandemic.

The needs of disabled and chronically ill people vary by person. For chronically ill and disabled college students who benefit from in-person learning, they deserve to have the opportunity to do so in a safe setting. Being a disabled college student has its own challenges even in non-pandemic times—such as fighting to receive proper accommodations—and universities should not be making accessibility harder.

One step that some activists have been pushing for to make college campuses safer is to abolish Greek life for good. While some people have been calling out Greek life for its role in perpetuating rape culture and its institutional racism, the #AbolishGreekLife movement became more prominent during summer 2020.

The New York Times reported that across the United States, from Northwestern University to the University of Massachusetts, Amherst, students have called for fraternities and sororities to be banned or at least suspended due to sexual assault and drugging that has occurred at Greek life parties. As explored by Terry Nguyen in Vox, universities may be slow to act because some universities financially benefit from fraternities and sororities owning buildings on campus.

Research has linked Greek life affiliation to risky behaviors for over a decade. One 2008 study found that members of fraternities and sororities at Syracuse University were more likely to consume more alcohol and other substances than people not in Greek life. Peer pressure within the Greek system to participate in risky behaviors has also been linked to student deaths.

“The various aspects of the pandemic, such as fear of catching the disease, conflicting information rampant in social media, additional peer pressure specific to COVID-19 etc., can also increase psychological stress among college students, leading to increased risky and inappropriate behavior,” Zohoori said.