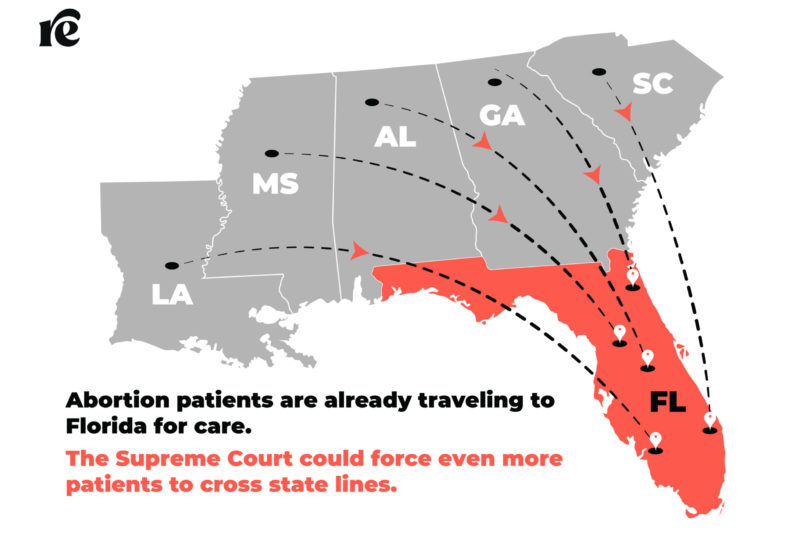 When the Supreme Court announced it would hear a case next term concerning a Mississippi 15-week abortion ban that every other court had declared unconstitutional, it all but declared that it’s ready to overturn Roe v. Wade.

But what does that mean for people’s lives? If the Court sides with Mississippi here and allows states to ban abortion before fetal viability, it means even more people will have to cross state lines to get abortions than they do now.

Just how far will people have to travel to access what was once a constitutionally protected right?

For those living in the South, Florida seems like a safe haven. The “What if Roe Fell?” map from the Center for Reproductive Rights and a New York Times analysis suggest that, if the Supreme Court were to overturn Roe, abortion rights will be protected there and no clinics will close. Florida’s state supreme court recognizes the right to abortion under the state constitution’s right to privacy, plus there is no mandatory waiting period in effect and abortion isn’t restricted until 24 weeks of pregnancy.

But legally protected and accessible are not the same thing; Florida limits insurance coverage of abortion in both Affordable Care Act and Medicaid health plans, and minors need parental consent or a judicial bypass. And while Florida offers much more protection than any of the states it borders, with a Republican legislature and a governor considered to be a 2024 presidential contender, that could change. With a Supreme Court decision expected next June, people on the ground are preparing for whatever happens.

Even now, abortion patients travel into Florida for multiple reasons: The clinics may be closer, their home state restricts abortion after 20 or 22 weeks after the last menstrual period, or news reports about state legislation can lead people to think abortion is already banned in their state.

Clinics and abortion funds will do what they can to help people who may need to travel—that is, of course, if they can afford the trip.

Terry Sallas Merritt, who works in strategic management at A Woman’s Choice Inc., an independent clinic group with facilities in Florida and North Carolina, said people already travel from Georgia to the Jacksonville clinic in Northeast Florida, either because the clinic provides care up to 24 weeks or they simply want to avoid Georgia’s state-mandated waiting period.

After A Woman’s Choice saw an increase in patients who needed more financial and logistical help, it launched a patient support team in May 2020. The team helps people arrange everything from getting an appointment to securing money for the procedure, travel, food, or child care, as well as offering emotional support, Sallas Merritt said. A member of the team spends anywhere from two to seven hours assisting a patient who needs support.

Planned Parenthood has already expanded care in northern Florida due to increased demand. Laura Goodhue, vice president of public policy for Planned Parenthood of South, East and North Florida, said its Tallahassee center has seen a 30 percent increase in out-of-state patients in the last six months, while its Jacksonville clinic is also seeing more demand but with a less marked increase. Most people are traveling from Georgia, but there are also folks from Alabama, Louisiana, Mississippi, South Carolina, and even a few from Texas, Goodhue said.

To meet patients’ needs, the Planned Parenthood is increasing the number of days it provides abortion, adding evening hours, hiring more providers, and offering care up to 17 weeks and 6 days of pregnancy, an increase from 15 weeks and 6 days. Thanks to an anonymous grant, the affiliate also hired a patient navigator within the last year who helps patients coordinate out-of-state travel and lodging and assists people under 18 seeking judicial bypass so they can get an abortion without telling their parents. They’re looking into adding child care services at their health centers because they know that can be a huge barrier for patients, Goodhue said.

In a preview of what could come, the state’s other Planned Parenthood affiliate saw 20 to 30 patients from Texas during March and April of 2020 when abortion access flickered on and off, said Stephanie Fraim, president and CEO of Planned Parenthood of Southwest and Central Florida.

“As long as the state holds strong with the laws we have right now, we can be someplace that women, particularly in the Southeast, can find sanctuary.”
-Stephanie Fraim, Planned Parenthood of Southwest and Central Florida president and CEO

Fraim is prepared to increase capacity if her clinics see a surge in people traveling from out of state. The Orlando location offers abortion care four days a week, and Tampa offers five days. The Sarasota clinic, about an hour south of Tampa, currently offers abortions one day per week, but it could increase to two days. Some people fly into Orlando and drive southwest to Tampa or Sarasota because that’s where they have friends or family. (Fraim’s Orlando clinic also operates as an abortion care training center where providers-to-be from around the country spend anywhere from two to six weeks learning procedures, how to do medication abortions, patient education, and how to deal with protesters. But trainees can’t serve their communities if their state bans abortion.)

Unfortunately, one way clinics could ramp up abortion access is closed off in Florida: Thanks to an ultrasound and in-person consent requirement, patients are effectively unable to get medication abortion through telemedicine.

“It’s a shame—and a particular form of cruelty—that they don’t allow that to happen,” Fraim said. (Other pill options available in Florida include legally murky services like Aid Access and pharmacy sites.)

Fraim, who’s worked for Planned Parenthood for 17 years, has sometimes felt like Chicken Little shouting about what the Supreme Court could do to abortion access. But now that it’s taken a direct challenge to Roe, she is ready to activate her emergency network to help traveling patients with logistics like housing and car rides.

“I have a group of board members and donors and supporters who are well aware of what I’m going to be asking [of] them in the coming years,” Fraim said. “As long as the state holds strong with the laws we have right now, we can be someplace that women, particularly in the Southeast, can find sanctuary.”

An oasis of care in the South—but for how long?

It’s not clear that Florida’s laws will hold. Of the states in the South, Florida is the only one where abortion rights are considered “protected,” but it’s possible that could change in the next year, said Jennifer Driver, the senior director of reproductive rights at the State Innovation Exchange (SiX), a nonprofit that helps state lawmakers advance progressive policies.

If 2021 is the worst year for abortion restrictions since Roe, next session could be even worse; state lawmakers may be even more emboldened to pass restrictions as we await the Supreme Court’s decision, Driver said.

“If you thought that 2021 in state houses was rough, 2022 could be just as bad with folks really sinking their teeth into what could come,” Driver said.

For evidence that Floridians can’t count on rights remaining as rights, they need only look to the 2018 referendum that restored voting rights to formerly incarcerated people—only for the legislature and Gov. Ron DeSantis to gut them, Driver said. “This idea that just because you’re ‘protected’ it stays protected, for Florida, makes me really concerned,” she said.

Driver thinks Virginia will take up Florida’s mantle of the South’s true safe haven, but traveling there may be just as far as Illinois for some people. “I mean, Virginia is what we call the South now,” she said. “But it makes me even more concerned because it’s just that much further from those true Southern states.”

Democratic state Rep. Anna Eskamani said Florida Republicans feel emboldened by the 2020 election, when Donald Trump won the state, and she suspects conservative lawmakers will push even harder now that there’s a direct challenge to Roe. (They also may want to shore up their anti-abortion credentials since 2022 is an election year.) Eskamani thinks Republicans may try a ballot initiative to rewrite the state constitution’s right to privacy in a way that would not protect abortion, though a similar effort failed in 2012.

“They’re going to try anything they can to water that down, to weaken it, so that Florida is not going to have a firewall in the face of a SCOTUS decision,” Eskamani said.

Eskamani also noted that an abortion ban in cases of fetal diagnosis—which she called “a clearly offensive piece of legislation”—passed the Florida House but not the senate last session, so it’s possible that effort could succeed in 2022. A ban on abortions after 20 weeks has been filed for at least the past three years but hasn’t gotten a vote so far. Plus, while the state’s 24-hour waiting period is temporarily enjoined, legal challenges are still pending and, if it were to go into effect, would present yet another barrier for patients. Eskamani and her colleagues will do what they can to fight these bills, including proposing amendments.

Newer kinds of challenges are also popping up. Goodhue said activists are trying to pass local ordinances banning abortion, attempting an end-run around the state constitution. Thus far they’ve succeeded in the Panhandle’s Santa Rosa County, which borders but does not include Pensacola.

The Florida Panhandle is relatively accessible for people traveling from southern Louisiana, Mississippi, and Alabama. But there is only one clinic in the Panhandle—in Pensacola—and it does not offer the standard of care for medication abortions. Rather than mifepristone and misoprostol, the clinic advertises a combination of methotrexate, a chemotherapy drug, and misoprostol, a regimen that causes more intense side effects. Many abortion funds don’t work with this clinic as a result.

The Florida Panhandle is a difficult area for abortion providers. Goodhue noted that the first known abortion provider to be murdered, Dr. David Gunn, was shot outside his Pensacola clinic in 1993, and the area is a hotbed of anti-abortion activity. She said Planned Parenthood doesn’t have plans to expand into the Panhandle at the moment; instead, it would focus on increasing capacity in Tallahassee, which is nearly 200 miles further east. It could put an already expensive trip out of reach for some people.