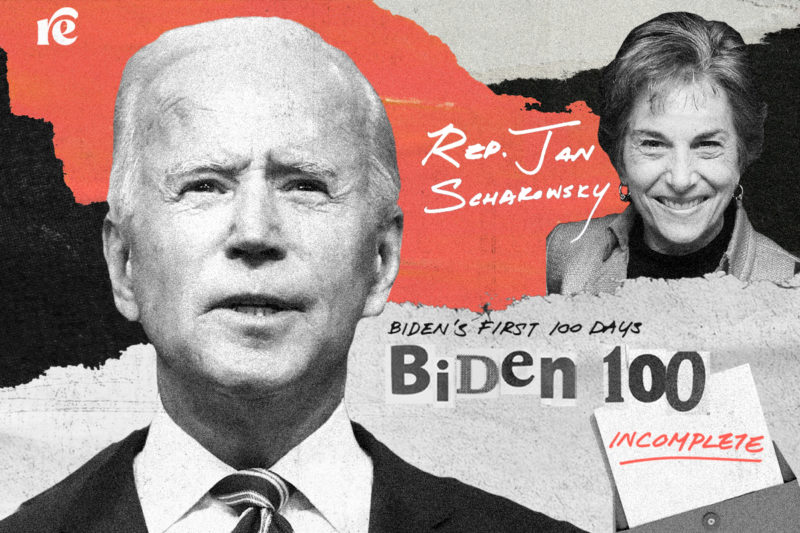 Who: Jan Schakowsky, Democratic representative for Illinois’ 9th District and chair of the Pro-Choice Caucus’s Providers and Clinics Task Force

“I say it with a smile, I’m not pessimistic at all about it. But I’m not a patient person, so let’s say an incomplete. You know, I think in some ways he has changed the culture; I think people now more believe that government can be their friend and can actually be the solution.”

This interview with Rewire News Group’s president and editor-in-chief, Galina Espinoza, has been edited for space and clarity; to hear the conversation in its entirety, please visit here. For more on the Biden 100 series, visit here.

Rewire News Group: There are a lot of pressing demands in front of this administration. As you think about what President Biden has to address, what would you say to him to make him prioritize reproductive rights issues?

Rep. Jan Schakowsky: As a longtime leader of the pro-choice movement in Congress and well before—even before Roe v. Wade, because I go back a very long way and do remember friends who really had to seek unsafe abortions—I was happy to see early on the ending of the global “gag rule.” Saying that, yes, foreign policy assistance can go—should go—to countries that offer abortion, recommendations about it, full-scale reproductive health. Because reproductive health is health care, and so we shouldn’t limit it. So I was very pleased with that initial move on his part and of course would like to see more and hope to see more.

You’ve introduced the first legislation—ever! in more than 40 years!—aimed at repealing the Helms Amendment. Why is this so important to you?

JS: First I have to admit to you that, while of course I’ve heard of the Hyde Amendment [which bans Medicaid from paying for abortion] and the global gag rule, I really hadn’t heard much about the Helms Amendment. It was introduced by [the late Senator] Jesse Helms, who of course was a known racist. And there are racist issues along with this because what it said is that no government around the world could get any assistance for reproductive health if they used abortion as birth control—but it has been taken to mean pretty much [any reason for] any abortion. Even [if the abortions are paid for] with their own money, organizations were not able to accept U.S. aid.

But the reason I said racism is because, who’s affected by this? These are mainly countries that are low-income—that’s why they need the help—and that are [made up of] people of color, and so [Helms] wanted to make sure that these countries would not get the help they need for the women who, many times, just don’t want to bring another child into poverty. Who want to take care of their family, to control their lives. This is a fundamental right, maybe the first right that women need: to control our own bodies and plan our own families. So I’m determined to get rid of this Helms Amendment.

Let’s talk about what’s happening in the states. What does it matter if something is legal under federal law if you can’t actually access services?

JS: Yes, the administration has actually talked about changing the Trump rules on [family planning program] Title X. Because the rules about who and where you can provide [service] were so exclusionary—they just made it so difficult, and that of course was the intention. And so I’m anxious to see what that looks like; getting rid of those Title X restrictions will be a very big help.

Some folks might say maybe this is all we’re going to get out of this administration, that we need to be patient. What’s your response to that?

JS: I’m certainly willing to give the president more time, but I think the advocacy for change is so important. I really consider myself a lifetime organizer; that’s what I was before I did any public election stuff. It matters so much, the voices of ordinary people. When I got on board [last summer] with repealing the Hyde Amendment, it was young, fierce, mostly women of color who came and said, come on! We just need to stop this! And we are—it’ll be a battle. For some on the Republican side, this is their number one issue, to prevent abortions. So when we talk about timing, it’s not just about when will the president decide, when will the Congress decide; it’s when the people get organized to say no. This is the moment now for women to have full health-care protection.

And you clearly see repealing the U.S.-focused Hyde Amendment, which bars Medicaid from being used to pay for abortions, as another key part of this effort. Why?

JS: Oh, absolutely! We’re looking through a different lens now—how racist [the Hyde Amendment] is, how antagonistic it is to low-income women, because who would rely on public funding for abortion services? Because it should be available! And it’s not just about health-care protection, which is the main thing. It is about choice, it is about independence, ownership of our body. If men needed abortions, believe you and me, a long time ago, they would have been able to have them—the ability to make decisions about our families.

The president has yet to publicly say the word abortion. Why do you think that is and what do you think it’s going to take to get him to say it?

JS: I want to hear that word, too! But you know, the right to choose, we’ve used that for years. Pro-choice. For a long time in our culture, there has been an avoidance of the word. So I think it is important that we help people to say that—that this is a right, it is legal in the United States of America, and it is on a long list of health-care services that need to be provided. And that’s that. So I think we’re going to have to help a lot of people who have not been accustomed to declaring it as a right.

Do you think it’s important he say it, or is pro-choice enough?

JS: It depends on what he does. I’m looking at results here. I think it might help him to propel him forward if he could say the word, but I’ll take action.

President Trump left his mark in one significant way: on the federal court system. President Biden has announced his first slate of nominees. Talk to me about what you think his impact could and should be on shaping—some might say reshaping—the federal judiciary.

JS: First of all, it is important for him to fill as many vacancies as he can, and continue on this path of nominating very diverse candidates. And I do think we need to rebalance the Court. And I think we should not exclude the idea of adding members to the Court. Now, the Republicans will say this is packing the Court. You know what? They are the original court packers by not allowing, with almost a year left to go, President Obama’s nominee [Merrick Garland]!

And then of course, they packed the Court while the election was already underway! Early voting had already begun when they were putting their choice out [Amy Coney Barrett], and she has a long record of extremism on these issues. So I think we have to take seriously the option—and it is an option—to rebalance the Court, because it’s so skewed right now. We have to be bold about how we move forward because that is the court of last resort in the United States of America, and it’s out of reach to too many people.

What are you hoping to see from Biden by the 2022 midterm elections?

JS: There have to be concrete victories that actually have helped people: unemployment insurance, food systems, helping to keep people in their homes, crushing the virus instead of mocking the virus. The Rescue Act has meant so much, and if we can go ahead now and put lots of people back to work in good-paying jobs, it’s going to make all the difference. And if we do something about the fairness of our democracy. And back to our main topic: This is not only a pro-choice Congress with some new members who are absolutely wonderful progressives, but it’s a pro-choice nation. This nation is not for the policies that would really eliminate the access to abortion.