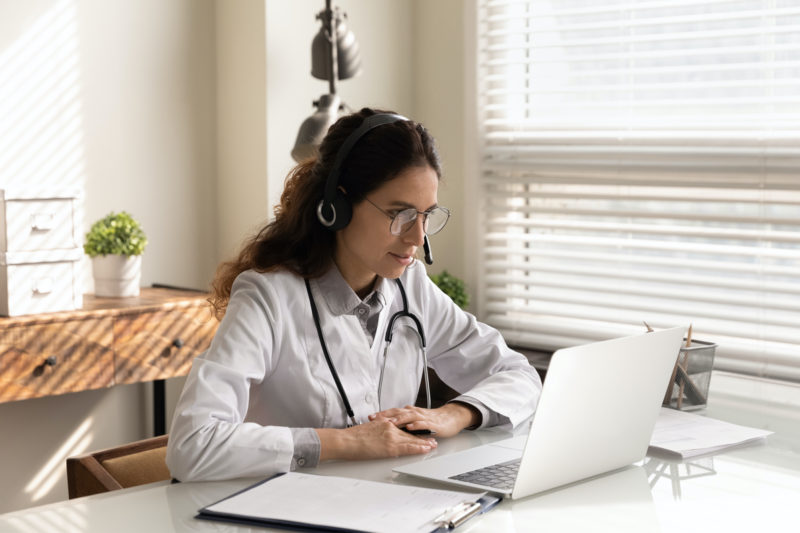 As vaccinations roll out and some parts of the world start to reopen, we need to envision what the new normal will be. This means addressing existing inequalities illuminated during the pandemic, by looking at how we’ve adapted and bringing innovations into the future instead of reverting to how things were before. Making medication abortion readily available via telemedicine does both.

On Monday, the Biden administration took an important step in envisioning that new reality by announcing it was continuing to suspend a requirement that patients pick up abortion medications in-person during the pandemic.

Over the last year, the COVID-19 pandemic has created significant barriers to accessing basic health-care services, with women in the United States more likely to report experiencing major gaps in routine medical care, according to a survey.

But there is a silver lining: Research suggests telemedicine may improve access to health care and dismantle barriers to health-care services. While access to telehealth services has, to this point, been relatively limited in scope and unevenly available, the number of survey respondents who reported having a telehealth visit in the last year roughly tripled from pre-pandemic use. People who used telehealth reported high levels of satisfaction, meaning expansion of telemedicine could be a more permanent solution to gaps in access to in-person medical care—including reproductive health care.

Multiple countries have set up telemedicine services as a means of accessing abortion during the pandemic, with some temporarily allowing medication abortion pills to be distributed via mail. Still, the United Nations Population Fund estimated that 12 million women across 115 low-and middle-income countries lost access to contraception in 2020 due to the pandemic, leading to an estimated 1.4 million unintended pregnancies.

In August, a World Health Organization survey revealed family planning is one of the health services most frequently disrupted during the pandemic. Estimates last spring from the Guttmacher Institute painted a bleak picture: If 10 percent of safe abortions become unsafe because women cannot access services amid lockdowns and clinic closures, there would be an increase of 3 million unsafe abortions and 1,000 more maternal deaths. With major disruptions to national health systems caused by the need to respond to people affected by the virus, high-quality self-care interventions can provide an important alternative.

Abortion is essential health care, and access to abortion plays a key role in reducing health inequities across socioeconomic groups.

Scientific evidence shows it’s safe to prescribe medication abortion via telemedicine during early stages of pregnancy and to distribute medication abortion pills by mail. A recent Scottish study concluded “telemedicine abortion without routine ultrasound is safe and has high efficacy and high acceptability among women.” An English study similarly concluded that a “telemedicine‐hybrid model for medical abortion that includes no‐test telemedicine and treatment without an ultrasound is effective, safe, acceptable and improves access to care.”

There’s a window of opportunity to make access to medication abortion more easily available, including through telemedicine. In the United Kingdom, where temporary rules installed during the pandemic allowed medication abortion to be prescribed via telemedicine, the English and Welsh governments are consulting the public about whether or not to make those rules permanent.

In the United States, more than 150 members of Congress filed an amicus brief in February, challenging the Food and Drug Administration’s in-person requirement for dispensing mifepristone during the COVID-19 pandemic. Democrats from the House Oversight Committee also sent a letter to acting FDA Commissioner Dr. Janet Woodcock urging the agency to lift the Risk Evaluation and Mitigation Strategy (REMS) requirement that medication abortion pills be obtained in-person from a health-care provider. The FDA listened: This week, Woodcock said the agency would stop enforcing the requirement and would allow patients to receive medication abortion pills by mail—for the duration of the COVID-19 pandemic.

BREAKING: ACOG win! The @US_FDA Acting Commissioner Janet Woodcock has notified @ACOG and @MySMFM that the agency will "exercise enforcement discretion" regarding #mifepristone through the duration of the #COVID19 public health emergency. 1/ pic.twitter.com/PDpJ7000bc

Women should always be in control of their health and reproductive lives—not just during global pandemics. Abortion is essential health care, and access to abortion plays a key role in reducing health inequities across socioeconomic groups. While telemedicine doesn’t address all access issues—problems and inequities with telecommunications infrastructure mean we will always need in-person access to abortion care—measures taken during the pandemic to increase abortion access should remain in place post-pandemic.

Let’s stand up to political opposition and follow the scientific facts: Make medication abortion available via telemedicine to women around the world.